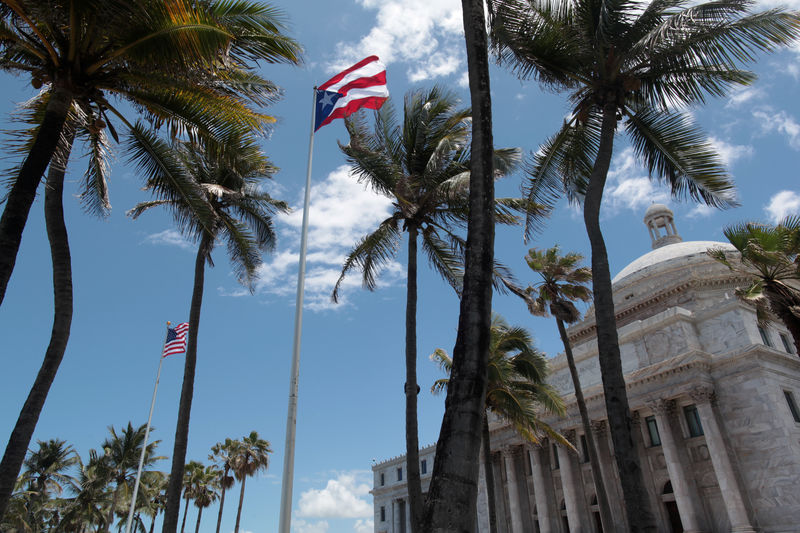 © Reuters. FILE PHOTO: The flags of the U.S. and Puerto Rico fly outside the Capitol building in San Juan

Puerto Rico’s bankruptcy takes up the bulk of the island’s $120 billion of debt and pension obligations and analysts have raised questions about the island’s future market access due to the board’s attempt to void some outstanding bonds.

Under legislation backed by Governor Wanda Vazquez Garced, the Puerto Rico Fiscal Agency and Financial Advisory Authority would be charged with developing a policy for the government and its public corporations that sets a limit on tax-backed debt.

The agency would also have to approve any debt issuance, which would be limited to maturities of no more than 30 years with proceeds allocated for only capital improvements. Principal payments would be required to begin within two years of issuance.

Debt refinancings would have to produce debt service savings without extending maturity dates beyond those on existing bonds. Exceptions would be made for bond refundings to address natural disasters or emergencies.

“Upon the possibility and need that the government returns to capital markets and in accordance with our public policy, this law establishes uniform and responsible processes for any future debt issuance,” the governor said in a statement.

The board said it welcomed a policy to prevent a repetition of “irresponsible fiscal management and debt issuances” that led to the island’s financial crisis and subsequent 2017 bankruptcy filing.

The bill now heads to the legislature, where support for the measure was unclear.

Concerns have been raised about Puerto Rico’s future ability to access the U.S. municipal market without paying a bruising penalty given the board’s contention that more than $6 billion of general obligation bonds sold in 2012 and 2014 should be invalidated because they breached a debt limit in the island’s constitution.

Meanwhile, the governor and the board announced on Tuesday that public sector workers will receive about $60 million in Christmas bonuses this year.

In July, the board said its $20.2 billion, fiscal 2020 budget for Puerto Rico’s central government would prohibit officials from moving money around to pay for things not in the board’s fiscal plan like the bonus, which has been the subject of past spending disputes.

On Tuesday, the board said that the bonus is “part of the routine compensation package provided to public employees,” and that it worked with the governor to identify funding to pay for it.