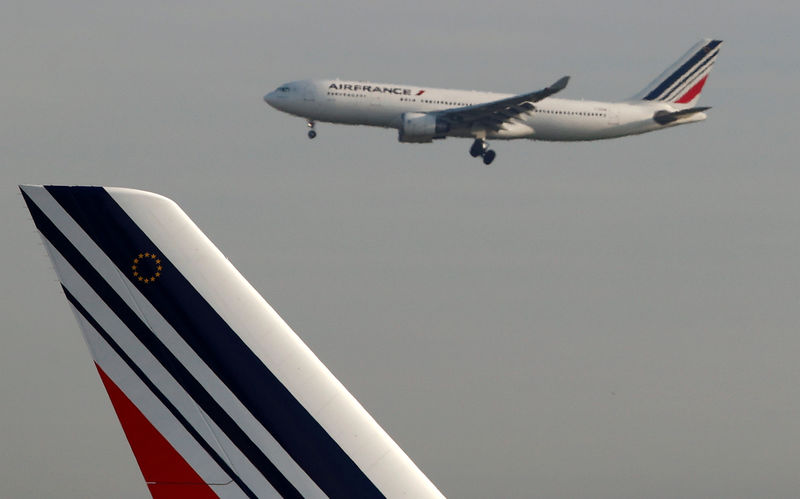 © Reuters. FILE PHOTO: An Air France Airbus A330 airplane lands at the Charles-de-Gaulle airport in Roissy

“The Air France-KLM group has all the assets to regain its leadership position,” Smith said in a company statement ahead of his first major strategy presentation since joining from Air Canada last year.

After a wave of 2018 strikes that grounded flights and cost 335 million euros ($373 million), the Franco-Dutch group has stabilized under Smith’s leadership thanks to union deals that have pushed up wage costs but increased operating flexibility.

Air France’s operating margin came in at 4.8% for the first nine months of 2019, a 1.7 point decline from the same period a year earlier.

Under his new five-year plan, Smith vowed to lift profitability and restore dividends by “simplifying our fleet, clarifying our brand and market positioning and unlocking significant commercial and operational flexibility” thanks to labor deals. Air France-KLM has not paid a dividend since 2008.

The group also pledged to drive costs lower by speeding up the renewal of its fleet and being more flexible in managing the combined Air France-KLM fleet of more than 500 aircraft.

Air France-KLM took a 100 million euro charge last quarter to retire its Airbus A380 superjumbos early and replace them with more fuel-efficient planes.

Smith also overcame Dutch objections earlier this year to push through an integration plan combining management of the Air France and KLM aircraft fleets, which were still being handled separately 15 years after the airlines merged.

To boost sales, the group said it aimed to sharpen the focus of its three main airline brands. Air France will push harder into premium travel, with KLM positioned as a competitive network operator of connecting flights through Amsterdam, and budget brand Transavia expanding in the low-cost market.

Transavia’s expansion has encountered hurdles, however, with the terms of labor agreements holding back pilot recruitment and trimming the carrier’s projected capacity this year.

Air France-KLM will nonetheless “pragmatically consider consolidation opportunities when and where they make sense”, the company told investors before Tuesday’s presentations.