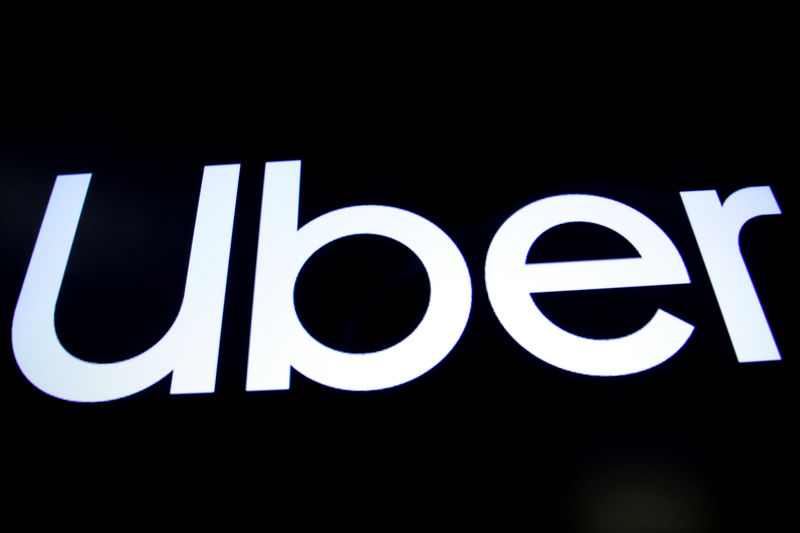 © Reuters. FILE PHOTO: A screen displays the company logo for Uber Technologies Inc. on the day of it’s IPO at the NYSE in New York

The company’s shares are expected to be under pressure on Wednesday, when a restriction on selling stock lifts. Some analysts expect more than 80% of the company’s outstanding shares will become eligible for sale.

Uber said its monthly active platform users rose to 103 million globally in the third quarter, from 82 million a year earlier, but fell short of analysts’ estimates of 105.5 million, according to IBES data from Refinitiv.

Uber’s costs jumped about 33% to $4.92 billion in the reported quarter. Gross bookings, a measure of total value of rides before driver costs and other expenses, rose 29.4% from a year earlier to $16.47 billion.

The company and its smaller rival Lyft Inc (O:), which are still making losses, have historically relied on heavy subsidies to attract riders. The companies are also spending to expand into newer areas.

Lyft’s results last week soothed some worries as the ride-hailing company posted better-than-expected third-quarter revenue and an improved outlook showed it was well on its way to profitability by the end of 2021.

Revenue from Uber’s ride-hailing business rose about 19% to $2.90 billion while sales from its Uber Eats segment rose 64%.

Net loss attributable to the company widened to $1.16 billion, in the quarter ended Sept. 30, from $986 million, a year earlier.