‘“Boomer” is the N-word of ageism. Being hip and flip does not make bigotry ok, nor is a derisive epithet acceptable because it is new.’

That is radio host Bob Lonsberry, described in his Twitter TWTR, +1.45% bio as an Army veteran and a churchgoing member of the National Rifle Association, taking offense to the use of the word “boomer.”

The classification has, indeed, been popping up more often lately, thanks to the emergence of the phrase “ok, boomer,” which has become a meme for dismissing out-of-touch arguments from the older generation. 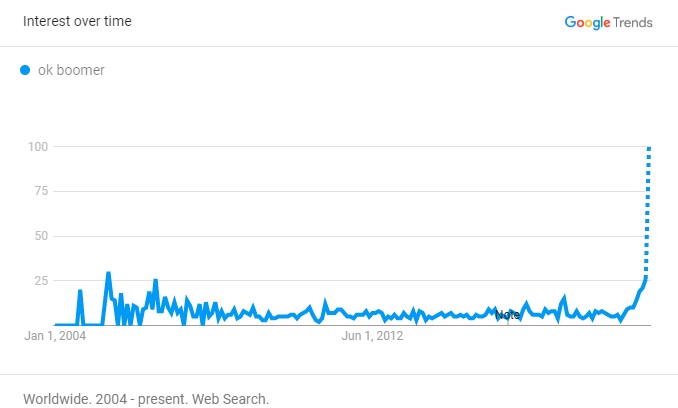 The New York Times, in a piece entitled “‘OK Boomer’ marks the end of friendly generational relations,” recently fanned those flames by saying “Teenagers use it to reply to… basically any person over 30 who says something condescending about young people — and the issues that matter to them.”

As for Lonsberry, his now-deleted tweet didn’t go over so well. Dictionary.com, in particular, clapped back with a response via Twitter that went viral.

“Boomer is an informal noun referring to a person born during a baby boom, especially one born in the U.S. between 1946 and 1965,” the online dictionary tweeted. “The n-word is one of the most offensive words in the English language.”

Boomer is an informal noun referring to a person born during a baby boom, especially one born in the U.S. between 1946 and 1965.

The n-word is one of the most offensive words in the English language. https://t.co/30OAf7N83e

Of course, countless others replied to Lonsberry with a simple “OK, boomer.”

Read: Boomers and Generation X see this as the No. 1 financial mistake — but millennials don’t

Lonsberry is American radio talk show host of WHAM radio in Rochester, an affiliate of Fox News Radio and local WSYR in Syracuse.