Home
Stocks
Project Syndicate: The miracle of 1989: The tanks didn’t roll, and Europe was free
Prev Article Next Article 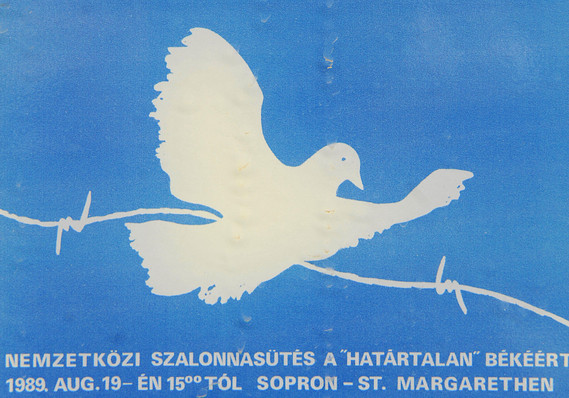 Part of a poster advertising the Pan-European Picnic on Aug. 19, 1989, when thousands of Hungarians and East Germans crossed through the barbed wire of the Iron Curtain into Austria. It was one of the seminal events leading to the peaceful end to the Soviet empire.

STOCKHOLM, Sweden (Project Syndicate) — This month marks 30 years since Europe — and human civilization generally — began to undergo a miraculous transformation that is now etched in the world’s memory.

By the summer of 1989, the Soviet Union was already in terminal decline. The only question was whether communism would disintegrate peacefully, or amid an explosion of violence and devastation.

Thirty years ago this month, a series of peaceful demonstrations in Eastern Europe set off a chain of events that culminated in the collapse of the Soviet Union. Looking back, it is now clear that Europe experienced a miracle in 1989: the story could have had a much darker and bloodier ending.

In the Soviet Union itself, Mikhail Gorbachev’s policies of glasnost and perestroika had opened the floodgates of change, but Gorbachev still seemed to believe that the communist system could be salvaged through reform.

Meanwhile, on the periphery of the Soviet empire, many feared that a potential collapse of the system would bring Red Army tanks back into streets and city squares. Memories of Soviet crackdowns in Berlin in 1953, Budapest in 1956, and Prague in 1968 remained vivid, as did the severe repression of the Baltic states in the run-up to World War II.

Born in terror, the Soviet Union had been sustained by jackboots and secret police. Nobody knew if it could survive without resorting to brute force once again. It was a nervous time for Europe.

See photos: Germany before and after the fall of the Berlin Wall

But it was also a time of change.

Efforts to suppress Poland’s independent trade union, Solidarity (Solidarność), had failed. Forced to compromise, the Polish communist regime held semi-free elections in June 1989, in which Solidarity won all but one of the freely contested seats.

Meanwhile, in the three Baltic republics (Estonia, Latvia, and Lithuania), broad-based “people’s fronts” had already been calling for more autonomy from the Soviet Union, and soon began demanding full independence.

On Aug. 23, 2 million people formed a human chain stretching 372 miles (600 kilometers) through Estonia, Latvia, and Lithuania, calling for independence. The timing of the so-called Baltic Way was no accident.

Exactly 50 years earlier, Hitler and Stalin had entered into a secret non-aggression pact, whereby Eastern Europe was to be divided between Nazi Germany and the Soviet Union. That paved the way for World War II, and immediately spelled the end of freedom and independence in the Baltics.

But the central, potentially explosive arena in 1989 was the so-called German Democratic Republic (GDR) — that is, communist East Germany. This was essentially a garrison state, built for the protection of five Soviet armies — spanning 19 divisions and comprising 500,000 soldiers — that had been stationed there ever since 1945.

Although the Berlin Wall became a powerful symbol of Europe’s bifurcation after August 1961, it is worth remembering why it was needed in the first place: to prevent the collapse of the GDR, and thus of the Soviet outer empire in Europe.

A few days before the human chain formed in the Baltics, on Aug. 19, 1989, some 600-700 East German citizens had held a peaceful demonstration during which they crossed the barbed wire near Sopron, a small Hungarian town on the border with Austria.

What became known as the Pan-European Picnic was the largest escape from behind the Iron Curtain since the building of the Berlin Wall. More to the point, it had been carefully planned to test the reaction of the Soviet authorities.

In the Kremlin, the Soviet leadership — or Gorbachev, at least — continued to believe that the empire was safe and could be reformed. The Baltic Way was tolerated, and the Pan-European Picnic was simply ignored.

But the latent potential of those demonstrations soon became apparent. People began to flee the GDR by the thousands. Soon enough, the Hungarian authorities had no alternative but to open the border. Droves of East Germans flooded into Czechoslovakia in search of a route to the West.

On Nov. 9, fumbling GDR leaders even opened the Berlin Wall itself.

The East German state would be gone in less than a year. Following democratic elections in March 1990, East Germans decided to merge with the Federal Republic of Germany. With the GDR gone, the collapse of the Soviet empire was all but complete.

Read: The 25th anniversary of the Berlin Wall’s collapse: Balloons instead of bullets

Some think that the momentous change that began in 1989 was inevitable. They would do well to remember that in June of the same year, China’s elderly rulers had deployed tanks to crush (literally) the peaceful freedom movement in Tiananmen Square.

Also read: A Tiananmen ‘solution’ in Hong Kong would destroy its economy

And there were plenty of communist leaders urging a “Chinese solution” for the demonstrations of 1989. In fact, at the Soviet command post just south of Berlin (which had served as command center for the German Army during World War II, and which had been seized from Hitler decades earlier), Red Army marshals were awaiting orders to march in and save the empire by whatever means necessary.

No one can know what would have happened if more conservative forces within the Kremlin had prevailed. Most likely, there would have been widespread disorder and violence across much of the region, which would have put the West under substantial pressure to intervene.

Open war would have been a distinct possibility. After all, large empires throughout history have generally gone out with a bang. If anything, the Soviet experience was an exception.

Thankfully, that order to the Red Army was never issued. Part of the reason was that Soviet leaders believed, mistakenly, that a crackdown was unnecessary, and that the system would survive.

But it was also because democratic forces were starting to assert themselves within Russia itself. The rising leader in Moscow was Boris Yeltsin, who held no attachment to the nostalgia of an overextended and unsustainable empire.

Thirty years ago, Europe experienced a truly miraculous few months. Today, we should honor not only those who fought for change, but also those who refused to send out the tanks. Blood could have flowed through the streets of Europe once again, but it did not.

Carl Bildt was Sweden’s foreign minister from 2006 to 2014 and prime minister from 1991 to 1994, when he negotiated Sweden’s EU accession. A renowned international diplomat, he served as EU special envoy to the Former Yugoslavia, high representative for Bosnia and Herzegovina, UN Special Envoy to the Balkans, and co-chairman of the Dayton Peace Conference. He is co-chair of the European Council on Foreign Relations.

This article was published with permission of Project Syndicate — Remembering the Miracle of 1989.