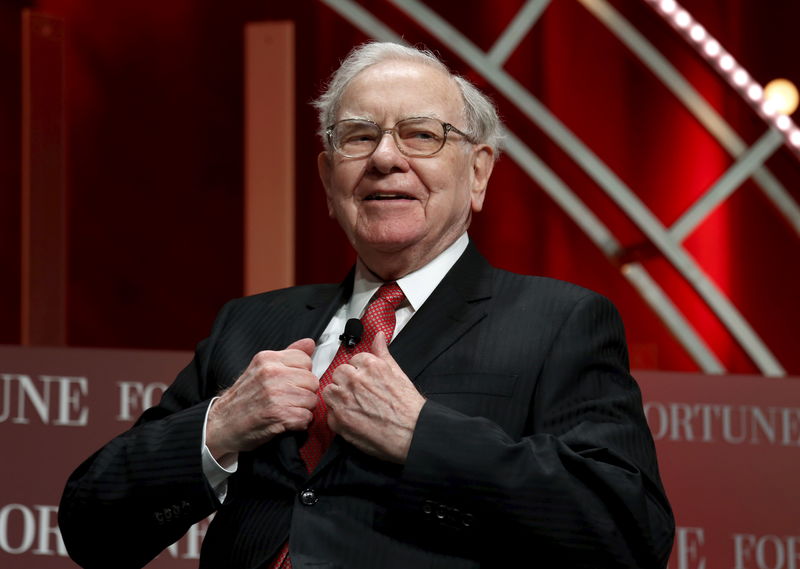 © Reuters. FILE PHOTO: Buffett, chairman and CEO of Berkshire Hathaway, takes his seat to speak at the Fortune’s Most Powerful Women’s Summit in Washington

By Jonathan Stempel and Shubham Kalia

Analysts on average expected operating profit of $4,405.16 per share, according to Refinitiv IBES.

A U.S. accounting rule requires earnings to incorporate unrealized gains even if Berkshire has no plans to sell the underlying investments. Buffett said the resulting volatility can mislead investors.

U.S. gross domestic product increased at a 1.9% annualized rate in the third quarter, the Department of Commerce said on Wednesday in its advance estimate of economic growth.

But the Federal Reserve on the same day nevertheless lowered interest rates for the third time this year amid uncertainty over trade policy, slowing global growth and Great Britain’s proposed exit from the European Union.

BNSF, one of Berkshire’s largest businesses, was able to post a 5% increase in profit to $1.47 billion despite a decline in revenue. Cost-cutting helped offset lower demand for consumer, coal, industrial and agricultural products, the latter in part because of new trade policies.

Shares of Berkshire have lagged the broader market, in part because of Buffett’s inability to deploy his company’s cash and equivalents, which totaled a record $128.2 billion at the end of September.

Buffett has gone nearly four years since completing a major acquisition, forcing him to look elsewhere to invest Berkshire’s cash. Berkshire has also resumed stock buybacks, and said it repurchased about $700 million of its stock in the quarter.