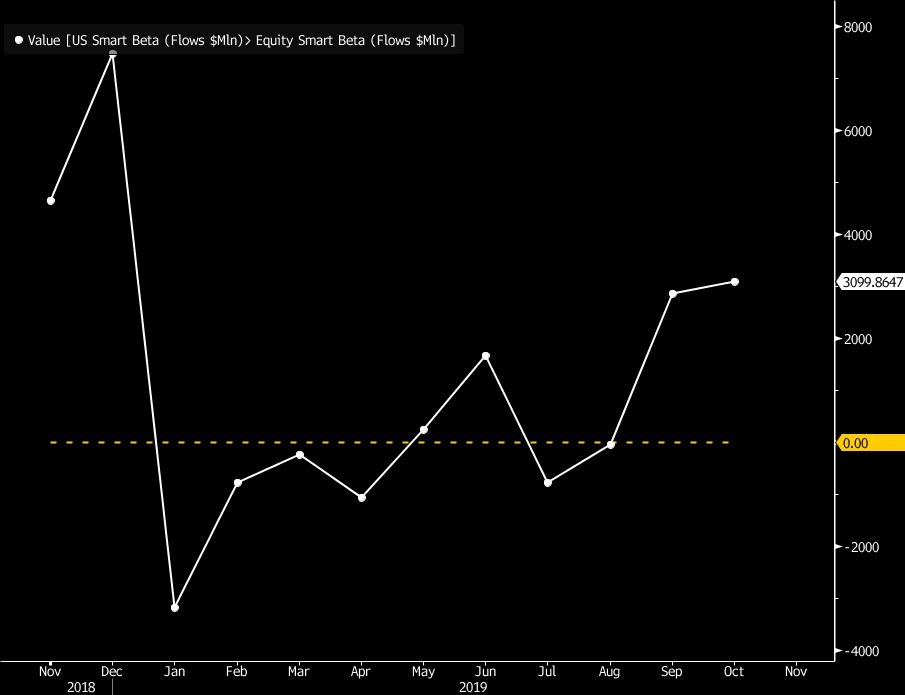 (Bloomberg) — It’s one of the most polarizing strategies there is, yet betting on value stocks is back in vogue for investors in exchange-traded funds.

More than $3 billion poured into ETFs that focus on undervalued companies in October, the most this year, data compiled by Bloomberg Intelligence show. The Vanguard Value ETF was the biggest beneficiary, adding close to a third of that amount. The fund rose 1% at 2:18 p.m. in New York Friday. Just this week, the SPDR S&P 400 Mid Cap Value ETF saw its largest inflow since December.

Buying cheap stocks has been a losing strategy for much of the last decade. The S&P 500 Growth Index has outperformed the equivalent measure of value by more than 80 basis points over that time frame, prompting some traders to declare that this style of investing is dead. But others remain convinced that the approach is due for a renaissance, particularly as the stock rally shows some fatigue after reaching a record.

“Every time the market has set a new high, something has come along to take it down,” said Stephen Cucchiaro, chief investment officer and founder of Boston-based 3Edge Asset Management, which oversees more than $900 million. “There’s a lot more upside in these undervalued markets, and we wouldn’t be chasing these overvalued markets.”

For Cucchiaro, who set up 3Edge three years ago after founding an ETF-focused advisory firm that was acquired by Charles Schwab (NYSE:) Corp. in 2010, it’s a signal of the time to rotate. His valuation models — which look at price versus sales, rather than the price-to-earnings ratio — show U.S. equities are the most stretched since the late 1990s.

He’s looking overseas as a result, particularly at Japan, where Cucchiaro says policy makers are getting savvy to the importance of managing the yield curve. In the U.S., small-cap value stocks are appealing, according to him. That’s a position that Michael Burry — whose bet against mortgage securities was depicted in “The Big Short” — has also championed.