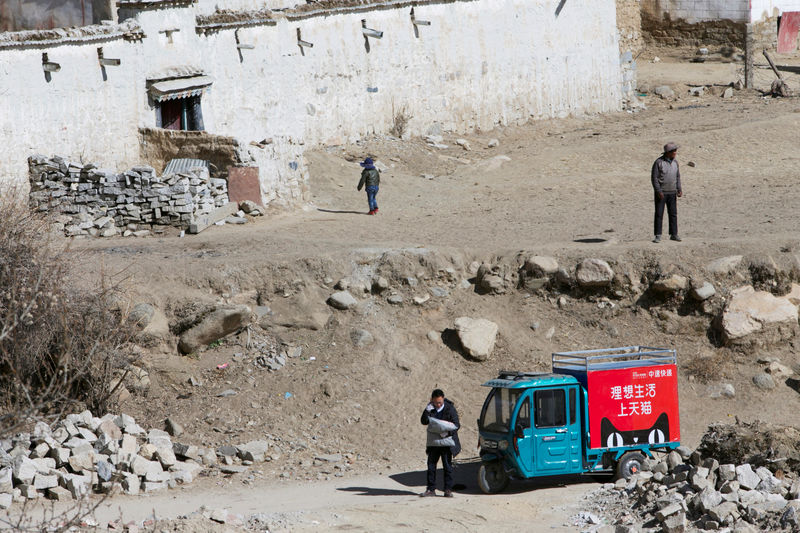 © Reuters. FILE PHOTO: Delivery man of Alibaba’s logistics unit Cainiao talks on a phone as he delivers a parcel in Lhasa

BEIJING/SHANGHAI (Reuters) – Wu Weidong was never much of an online shopper.

But messages from friends asking him to join their group purchases of fruits at bargain prices on the website Pinduoduo (N:) finally persuaded him to open an account there.

“It’s mainly because my friends said the items there are cheap,” he said. “So I’ve started using Pinduoduo more to buy fruits and snacks.”

Started four years ago by a former Google (NASDAQ:) engineer, Pinduoduo has become one of China’s biggest retail disruptors, breaking the dominance of Alibaba (N:) and JD.com by persuading users like Wu, who live in China’s smaller cities, to start shopping online.

Alibaba and JD.com have for years tried to unleash rural China’s spending power, teaching residents how to use their online platforms and using drones for deliveries to remote spots, with mixed results.

But the success of Pinduoduo’s model, which offers users deeper discounts on mostly generic products if they buy in groups, and encourages them to share purchases through messaging app WeChat, is driving Alibaba and JD.com to make a fresh push into China’s lower-tier cities.

Alibaba and JD.com now both have e-commerce apps similar to Pinduoduo’s and say that they anticipate strong growth from rural consumers.

In September, Alibaba ran “Super Bargain Day,” which took aim at such users with generous coupons and prices halved for 1 million items.

However, Pinduoduo’s annual spending per active buyer, at 1,467.50 yuan at the end of June, is lower than that of Alibaba, which said in September that users from less-developed areas who have been on its platforms for five years spent on average 10,600 yuan in the 12 months that ended in March. New users from those areas spent on average 2,300 yuan during that period, Alibaba said,

“China’s e-commerce has been a duopoly market for years. Out of everyone’s expectation there came Pinduoduo, emerging with a completely different set of practices to engage with users,” said Keso Hong, a independent internet commentator in China.

OPPORTUNITIES AND THE ECONOMY

Analysts say Pinduoduo gained a foothold in the market thanks to the shortcomings in some of Alibaba and JD.com’s models.

The two e-commerce giants built their businesses on the country’s burgeoning middle class, competing intensely to woo big international brands like Burberry or Valentino to set up online stores. But it was hard to persuade residents in lower-tier cities that they needed to shop for luxury goods online.

Pinduoduo, in contrast, set its sights on bargain-hunters in lower-tier cities.

“Pinduoduo is similar to Facebook (NASDAQ:) that we designed our feed-based model to recommend products to users,” Victor Tseng, vice president of corporate development at Pinduoduo, told Reuters.

Its model encourages users to recommend products to friends and family to gain discounts, and heavily leverages WeChat, China’s dominant messaging service, which is owned by Pinduoduo-backer Tencent Holdings (HK:).

“JD has enjoyed the advantage of being on WeChat for years, yet it failed to find the most efficient way to make use of this treasure,” Hong said.

A slowing economy has hurt Alibaba’s purchasing power and JD’s big-city core consumer base. Residents in lower-tier cities are starting to have higher disposable incomes compared with their first-tier city compatriots, whose living costs are higher, economists say.

CHASING AT THE HEELS

To be sure, Pinduoduo’s user base remains much smaller than market leader Alibaba’s, and its rise has not been without challenges.

Local media reports last month cited Pinduoduo’s founder Huang Zheng as saying in an internal meeting that its gross merchandise volume, the value of goods sold on its websites within a certain time frame, had surpassed that of JD.com. The remarks drew a sharp response from the latter.

“Based on our internal analysis, we believe there is a significant gap between Pinduoduo and JD.com in terms of GMV (by any imaginable measures), basket size, return rate, and so on,” a JD.com spokesman said.

Pinduoduo also remains dogged by accusations that its site hosts counterfeits. The company says it is cracking down on fakes.

Meanwhile, Alibaba and JD are trying to get a foothold in rural areas.

JD.com in September upgraded its group-buying platform, renaming it Jingxi, and is looking to improve logistics for users, saying that it wants to eventually fulfill deliveries to smaller cities within 24 hours.

It also pushed its nearly decade-old group-buying and flash-sale service Juhuasuan to a more prominent position in its e-commerce ecosystem, where it will offer heavily subsidized selling campaigns, discounts, coupons and other perks.

Alibaba vice chairman Joe Tsai in August predicted that retail consumption from the lower-tier cities and townships would triple from $2.3 trillion to nearly $7 trillion by 2030, equivalent to compounded annual growth of 10%.

An Alibaba spokesman said that although 85% of Chinese residents in developed areas have used Alibaba’s retail marketplace, the penetration was only 40% in less-developed places. That presents a “tremendous opportunity”, he said.

“The growth of the country is slowing. But at the same time, the purchasing power of lower-tier cities are not fully released,” said Liu Xingliang, an internet analyst at DCCI Data Center.