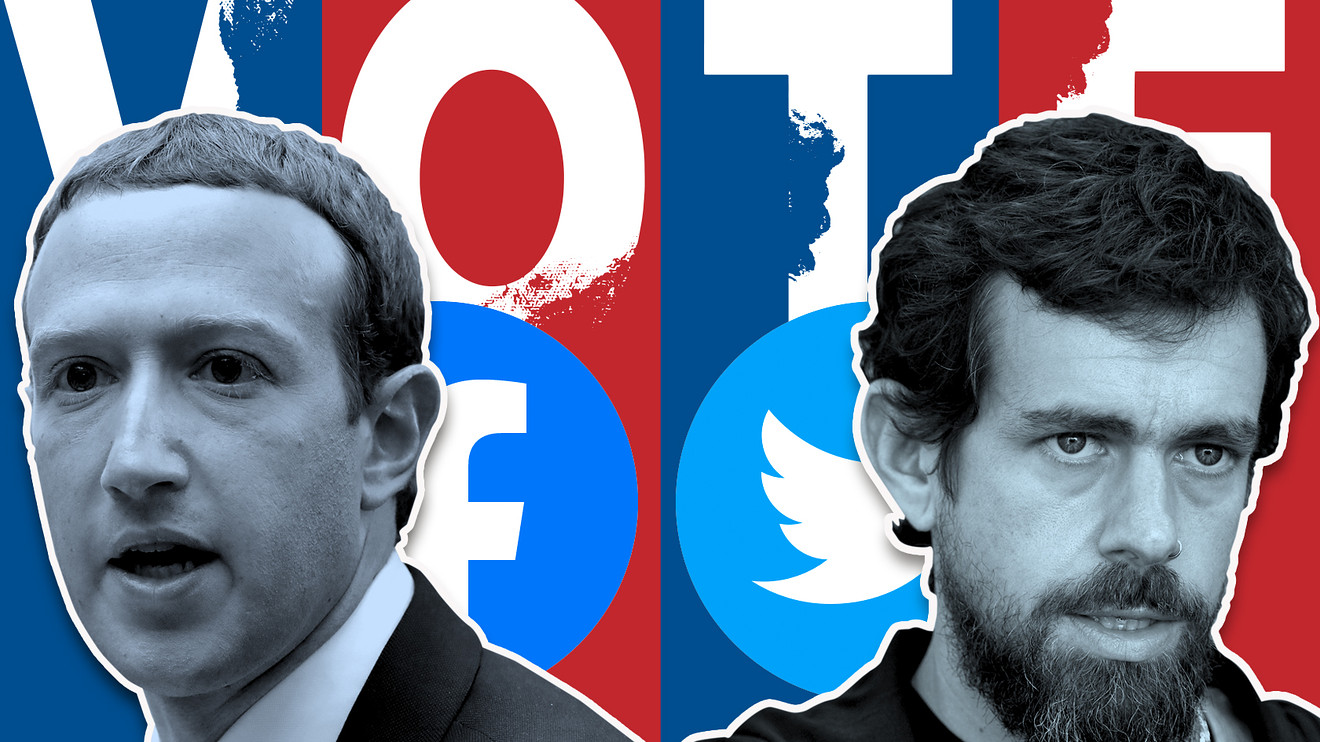 In their face-off over accepting political ads leading to the 2020 presidential election, tech icons Mark Zuckerberg and Jack Dorsey took distinctly different political stances and probably altered the landscape for such advertising on media.

The debate comes down to this: Facebook Inc. FB, +1.81%  will let politicians run any ads, whether true or not, on its platform because they fall under the dictum of free expression. Twitter Inc. TWTR, +0.37%  is spurning all political ads on the premise its fight against disinformation online would be compromised accepting ads with misleading political content.

At the same time, TV networks — which were never particularly adept at policing truth in political ads, such as the “Swift Boat” campaign against presidential candidate John Kerry in 2004 — momentarily escape scrutiny while the focus is squarely on beleaguered social-media companies like Facebook.

“The internet flat-out isn’t healthy in a lot of ways. One of them is that it can be a system for spreading disinformation,” Mozilla Corp. Chief Marketing Officer Jascha Kaykas-Wolff told MarketWatch in a phone interview. That’s why his browser company and others have stopped advertising on Facebook since it got into hot water through its involvement with political consultancy Cambridge Analytica, he said.

Whether more ad buyers move away from Facebook, which continues to be highly effective in persuading consumers on political and social matters, is another matter, Kaykas-Wolff added.

Dorsey said it would be hypocritical for tech companies to say they’re fighting misinformation, “buuut if someone pays us to target and force people to see their political ad… well… they can say whatever they want!” He said such ads had “significant ramifications that today’s democratic infrastructure may not be prepared to handle.”

For instance, it‘s not credible for us to say: “We’re working hard to stop people from gaming our systems to spread misleading info, buuut if someone pays us to target and force people to see their political ad…well…they can say whatever they want! 😉”

A clearly agitated Zuckerberg returned fire within minutes in a conference call with Wall Street analysts : “I get that some people will disagree with our decisions. But I don’t think anyone can say we’re not doing what we believe, or that we haven’t thought hard about these issues.”

To drive home his point, Zuckerberg said he wanted to “focus on talking about principles” and that “from a business perspective, it might be easier for us to choose a different path than one we’re taking.”

“We view the decision of whether or not to accept political ad revenue as largely speaking to the companies’ respective views on their role in society and their willingness to decide what ads really are political,” Evercore ISI analyst Kevin Rippey said in an Oct. 31 note. “FB has made clear they do not see themselves as having the authority to make such a decision, while Twitter has taken the other side.”

Both companies insist their views are not motivated by money because political ads account for a sliver of their revenue. Facebook on Wednesday said it expects ads from politicians to account for just 0.5% of its 2020 revenue. (With FactSet’s estimate of $85.64 billion in 2020, that’s still a hefty $428 million.) Twitter Chief Financial Officer Ned Segal said political ad spending for the 2018 midterm elections was less than $3 million, or less than 1% of Twitter’s annual revenue of $3 billion.

Lost in all the Facebook-Twitter bluster is Alphabet Inc.’s GOOGL, -0.15% GOOG, -0.09%  YouTube, one of its fastest-growing properties and a magnet for political ads.

“Google is really getting a pass on this, and letting Zuckerberg taking the incoming,” Jonathan Handel, an entertainment and technology attorney based in Los Angeles.

Google did not immediately reply to a message seeking comment.

Ultimately, in stirring the political pot, Dorsey achieved a self-serving trifecta of sorts. He diverted attention away from Twitter’s desultory results. He scored PR points banning political ads — though Twitter traffic continues to benefit from running political content on its site, including missives from a certain bombastic head of state. And he shifted pressure on a controversial topic to rival Facebook, a convenient target of both political parties.

“Candidates can still, and will, use Twitter to make political points,” Steve Passwaiter, vice president of Kantar/CMAG, which monitors political advertising, told MarketWatch in a phone interview. “If Dorsey really wanted to stop misinformation, he would take everything off the platform — paid or otherwise.”