Home
Stocks
The Margin: So we now know who left that Starbucks cup in the ‘Game of Thrones’ episode
Prev Article Next Article 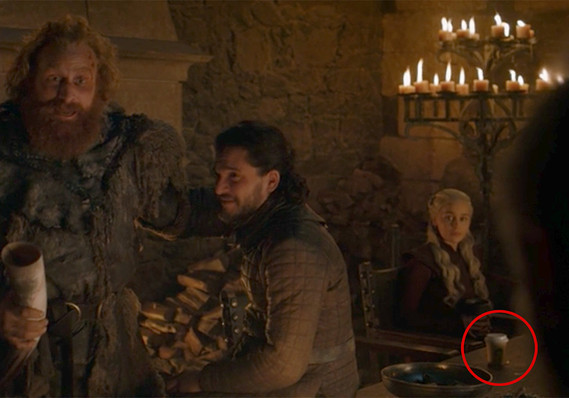 When HBO’s “Game of Thrones” was admonished over the modern-day coffee cup — which strongly resembled the familiar Starbucks paper cup — that appeared in a shot during its final season, actress Emilia Clarke, who plays dragon queen Daenerys Targaryen, was blamed by many viewers for the anachronistic prop, because it was sitting on a table right in front of her character.

But Clarke revealed who the real culprit was on “The Tonight Show with Jimmy Fallon” on Wednesday night.

It was, Clarke said, none other than Varys, a.k.a. the Spider and Master of Whispers — whose character, coincidentally, conspired against the Mother of Dragons in the final few episodes.

She added, “He’s like, ‘I think so, I’m sorry darling, I didn’t want to say anything because it seemed the heat was very much on you.’ ”

Of course, her character Dany turned the heat on Varys in the end, executing him for treason by having one of her fire-breathing dragons incinerate him.

The cup oversight infuriated many fans of the show at the time, however — perhaps because many viewers expressed distaste for the final episodes of the beloved HBO fantasy series based on George R. R. Martin’s books. And especially after an estimated 10.7 million Americans missed work the Monday after the Sunday night series finale aired.

Related: This chart shows how many ‘Game of Thrones’ viewers are hating this season

It led to lots of armchair detective work as viewers tried to sort out where the cup had come from, and how it had gotten left in the shot.

But you know who wasn’t complaining? Starbucks SBUX, -0.72% , which enjoyed at least $250,000 in free product placement thanks to the memes that sprung up featuring the cup, which many assumed was a Starbucks cup.

Read more: That ‘Game of Thrones’ coffee cup is worth at least $250,000 to Starbucks

Marketing experts noted the public-relations value was well over $1 million in word of mouth alone, however, even as a Twitter spokeswoman told MarketWatch at the time that Starbucks tweets were running at 10 times their hourly average on the Monday morning after the episode in question aired.