Home
Stocks
The Margin: How HBO’s ‘South Park’ and ‘Big Bang Theory’ deals compare to ‘Seinfeld’ and ‘The Office’
Prev Article Next Article
This post was originally published on this site

The raunchy Viacom-owned VIAB, +0.80%  adult cartoon dreamed up by Trey Parker and Matt Stone will be on HBO Max beginning in June 2020.

Hulu paid $192 million for the Comedy Central hit’s streaming rights back in 2015, and the WarnerMedia-backed HBO Max joined Amazon AMZN, -0.17%  and Netflix NFLX, -1.45% in a reported bidding war for all 301 episodes of the series that follows several foul-mouthed Colorado school kids. While the companies have not disclosed the financial terms of the deal, a source told Variety that the figure was around $500 million.

“South Park is unequivocally among the best — setting the satirical gold standard, with a consistent finger on the comedy pulse,” said Kevin Reilly, HBO Max’s chief content officer and president of TBS and TNT, in a statement. “Audiences have connected with Stan, Kyle, Cartman, and Kenny — either alive or dead — for over 20 years, and we look forward to connecting these characters to new audiences on HBO Max.”

It’s just the latest shot in the streaming services’ battle over the rights to pop culture’s most beloved reruns.

HBO also scored the rights to “The Big Bang Theory.”

While the details of the five-year deal have not been released, The Wall Street Journal reported that WarnerMedia (a subsidiary of AT&T T, -0.18% ) agreed to shell out $500 million over five years to stream all 279 episodes of the geeky sitcom starring Jim Parsons, Johnny Galecki and Kaley Cuoco on its new direct-to-consumer streaming service HBO Max, plus another $100 million or so in cable rights to broadcast the reruns for WarnerMedia’s TBS. But the Hollywood Reporter puts the deal at “billions,” and says it is “easily a record-setting five-year deal.” 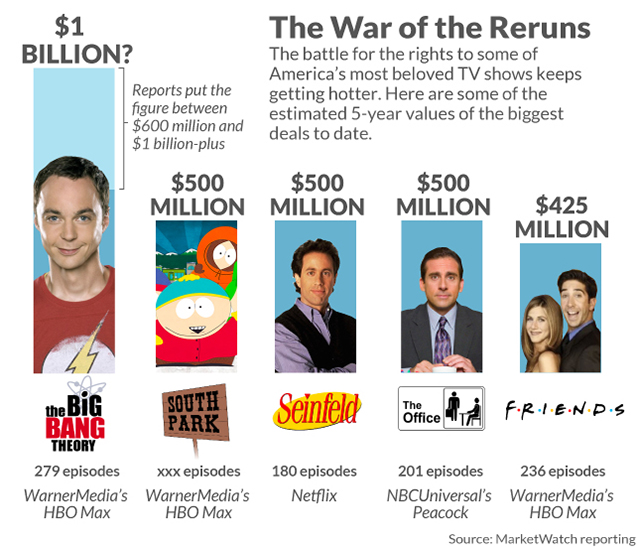 “Few shows define a generation and capture mainstream zeitgeist like ‘The Big Bang Theory,’” said Robert Greenblatt, chairman of WarnerMedia Entertainment and direct-to-consumer, in a statement to THR. “This show has been a hit virtually around the globe, it’s one of the biggest shows on broadcast television of the last decade, and the fact that we get to bring it to a streaming platform for the first time in the U.S. is a coup for our new offering.” HBO did not respond to a MarketWatch request for comment.

Related: NBC’s ‘Peacock’ streaming service to launch in April with ‘The Office’ and ‘Parks and Recreation’

It’s just the latest shot in the streaming services’ battle over the rights to pop culture’s most beloved reruns.

HBO Max also recently paid $425 million over five years to snag all 236 episodes of “Friends” away from Netflix NFLX, -1.45%.  (“Friends” and “The Big Bang Theory” are both produced by WarnerMedia, and a person close to the matter told the WSJ that Warner Bros. didn’t shop “The Big Bang Theory” to other streaming services — unlike “The Office,” which was shopped to services like Hulu, Netflix and Apple AAPL, +1.94%   before going home to NBCUniversal.)

So when HBO Max launches next spring, it will attempt to lure viewers with both “Friends” and “The Big Bang Theory,” as well as legacy British sci-fi series “Doctor Who” (another catalog it recently snapped up) for what’s expected to be a $14.99 monthly subscription.

Related: Apple’s streaming service is cheap, but how does it stack up against Amazon, Netflix and Disney?

Disney+ will launch on Nov. 12 with its own catalog of Marvel, “Star Wars” and classic Disney DIS, -0.32%   movies, as well as Disney Channel series. Apple TV+ will launch Nov. 1. And while it hasn’t licensed any major reruns like “The Big Bang Theory,” Apple has reportedly spent $6 billion on original content with A-list stars, such as Jennifer Aniston and Reese Witherspoon, Jason Momoa and Oprah Winfrey, as well as a “Sesame Street” spinoff.

But Netflix managed to bag “Seinfeld,” with news breaking in September that it shelled out more than $500 million to Sony Pictures Television SNE, -0.57%   for the worldwide rights to the iconic 1990s show about nothing.

All 180 episodes of the Emmy-Award winning Seinfeld are coming to Netflix — worldwide! — starting in 2021 pic.twitter.com/tLvcCKH4vl

That’s a huge bump from when Hulu bought six years of domestic rights to “Seinfeld” for $130 million in 2015. And this was a much-needed win after Netflix lost its most popular TV show, “The Office,” which will become part of Comcast’s upcoming NBCUniversal Peacock streaming platform in 2021. Netflix will hang on to “Friends” until its current deal ends in December.

This story was originally published in September 2019, and has been updated with the “South Park” deal.