Home
Stocks
Market Extra: The stock market is guaranteed to rise at least another 5% in the next 2 months — if this 70-year old trend holds
Prev Article Next Article

It is Halloween and the markets have enjoyed an anxiety-ridden climb toward all-time highs, but if this statistical trend for equity benchmarks holds up, there is much more room to run.

Dow Jones Data Group data going back to 1950 indicates that when the Dow Jones Industrial Average DJIA, -0.75% and the S&P 500 index SPX, -0.59% are up by as sizable a measure at the end of October as they are now, returns for the rest of the year are all but assured.

Moreover, those gains are remarkably stellar.

Specifically, when the Dow is up by at least 15% in the year to date through the end of October, the index boasts an average return of 5.55% over the next two-month period, with an average year-to-date return of 27.17%. The Dow was up 15.81% thus far on Thursday (see attached chart). 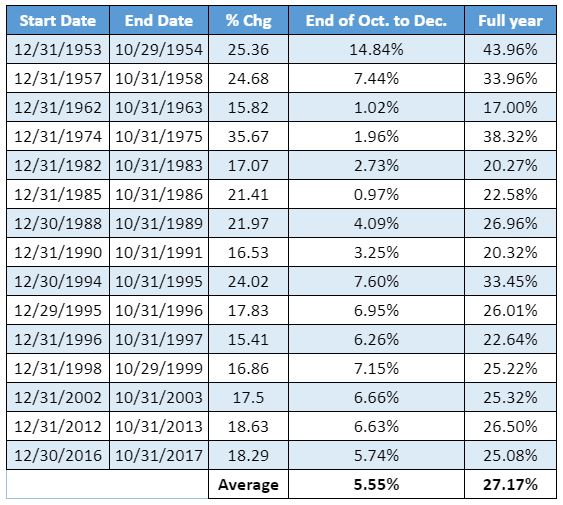 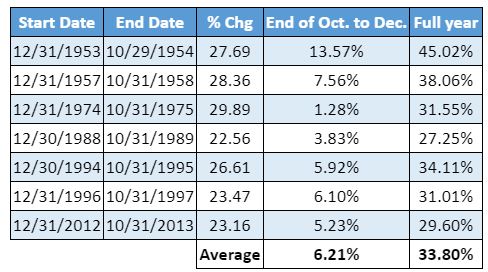 To be sure, past results are absolutely no indication of future returns and U.S. stocks on Thursday have already been edging lower amid growing worries about the likelihood that the U.S. will be able to carve out a genuine trade agreement with China soon and as an impeachment-inquiry vote tied to President Donald Trump was passed in the House.

That weakening comes a day after the S&P 500 index scored a record close in the wake of a Federal Reserve’s decision to cut interest rates for the third time this year, while also signaling that it would pause before making any further moves on monetary policy.

Having traversed a gauntlet of political worries, including the U.S. trade dispute with China and Britain’s long-sought plan to exit from the European Union, all three benchmarks are on pace to end a historically volatile period for stocks in positive territory. The Dow is up 0.4% so far in October, the S&P 500 boasts a 1.9% month-to-date gain, while the Nasdaq has jumped 3.7% so far in October.

Read: Sell the stock market in May and go away? Not so fast, say experts

October trading didn’t begin on a strong note though, the Dow, S&P 500 and Nasdaq registered back-to-back losses of at least 1% before steadying to start the month.

Now, stocks enter what’s historically been a strong period for equity markets. Historically, November to January marks the start of the best three-month span of the year, with average gains in November at 5.94% and those for December 5.1%. 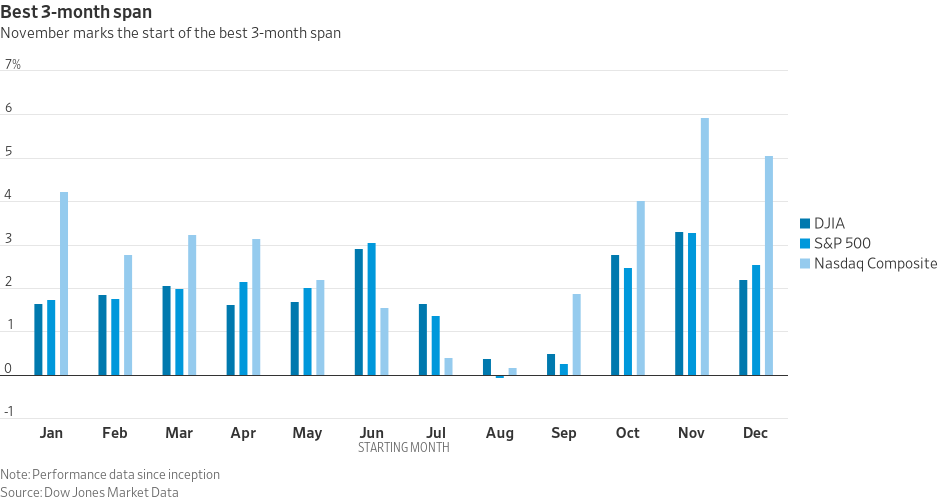 — Ken Jimenez contributed to this article