The record U.S. corporate debt boom is about to be put to the test.

Companies that loaded up on cheap and abundant debt during the past decade will face their first significant hurdle of the cycle as a $4 trillion mound of maturing bonds come due over the next five years, analysts from Oxford Economics warned on Thursday.

U.S. companies already are seeing declining profits and rising leverage, both of which can make it harder for weak companies to keep current on their debt servicing. If economic growth slows further and lenders become less accommodating, any failure to roll over maturing debt could spillover into other parts of the economy including the job market, wrote senior economist Lydia Boussour.

“While in itself, the corporate debt load is unlikely to trigger a recession, the next downturn could destabilize corporate debt markets, which in turn could fuel additional tightening of financial conditions and further dampen investment and employment,” Boussour wrote.

This graph shows the coming wall of maturities faced by both investment-grade and speculative-grade U.S. companies over the next few years. 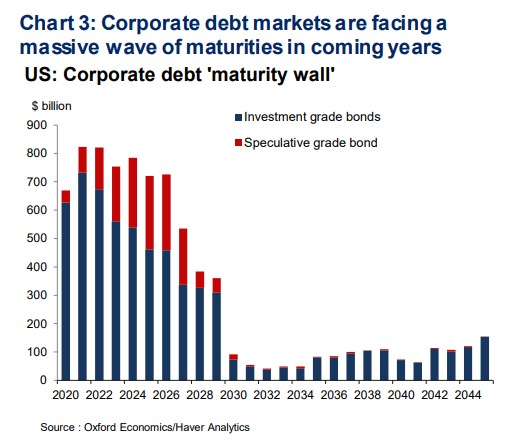 While the Federal Reserve cut benchmark interest rates on Wednesday to a range of 1.5% to 1.75% to help ward off a recession, Chairman Jerome Powell said it would take a “material” change in the economic outlook to justify further cuts.

Check out: Fed cuts rates for third meeting in a row, signals pause

Boussour said that U.S. companies will need ongoing access to abundant credit at low rates over the next few years when refinancing needs peak, particularly since a record $2.5 trillion of investment-grade bonds now sit on the cusp of junk-bond territory with BBB-ratings.

“Any financial stress could complicate the refinancing task, especially starting in 2022 when maturities for low-rated debt really star to kick in,” she wrote.

Meanwhile, cracks already have emerged in corporate credit in recent months even as the Fed has embarked on a series of interest rate cuts to help keep credit flowing and the economy humming.

Credit-rating firm S&P Global earlier this month said that its list of “weakest link” companies reached a 10-year high in September, while Moody’s warned that defaults in junk-bonds could “easily exceed the last cycle.”

Some of the most aggressive corporate financing deals of the past decade occurred in the roughly $1.2 trillion leveraged loan market, where last week Bank of America Merrill Lynch analysts pointed to “numerous and multiplying” signs of stress.”

And while leveraged loan defaults currently are trending at only about 2%, versus more than 10% following the 2008 global financial crisis, Boussour noted that the overall recovery rate on soured loans in this cycle is expected to drop to about 69% from a pre-crisis average of 82%.

That means any fallout in leveraged loans could be worse than in the past, while hitting a broad base of investors who added corporate debt to produce higher returns in an ultra-low yield environment.

This chart shows the span of corporate bond and loan holders from pension funds to collateralized loan obligations, which are pools of leveraged loans that are sold as bond deals. 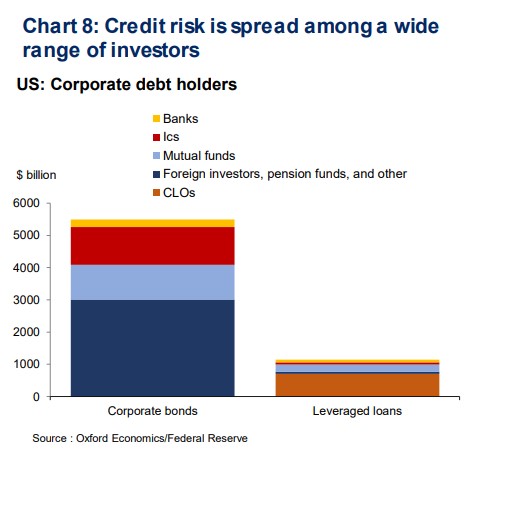 “Given not just the size of corporate America’s debt load but also the increasingly shaky foundations holding it up, we believe the situation bears close watching,” Boussour wrote.