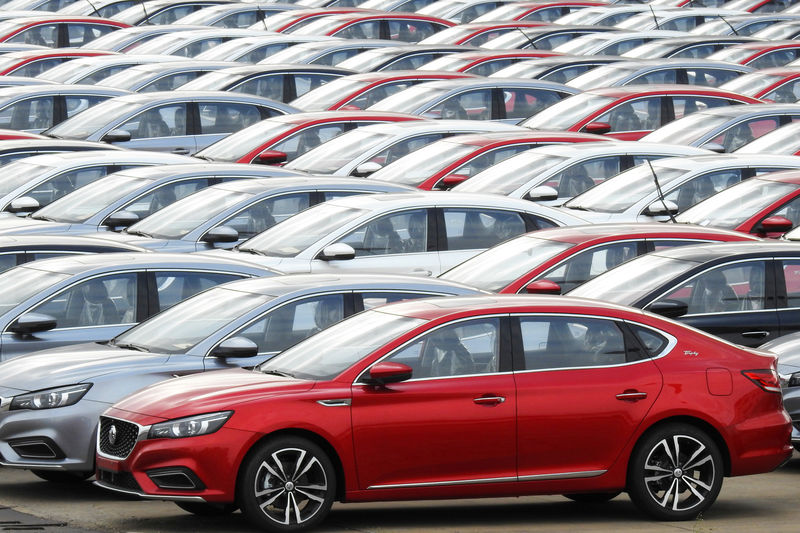 © Reuters. FILE PHOTO: Cars for export wait to be loaded onto cargo vessels at a port in Lianyungang

By Yilei Sun and Keith Zhai

BEIJING/SINGAPORE (Reuters) – Auto sales in China may skid to 26 million this year, a drop of around 8%, a senior industry executive warned, as the world’s largest auto market braces for a second year of contraction amid slowing economic growth and tighter vehicle emissions standards.

The latest prediction, by Fu Bingfeng, executive vice chairman of the China Association of Automobile Manufacturers (CAAM), is lower than the group’s previous forecast for a 5% drop, issued in July.

Amid gathering gloom over the global auto industry’s biggest growth story of the last 20 years, carmakers like General Motors (N:), Ford (N:) and Peugeot SA (PA:) have all reported double-digit percentage sales declines. Some smaller firms have even started to shut down capacity and seek consolidation.

“For this year, we now expect to see if we can hold on to (sales of) 26 million vehicles,” Fu told Reuters, speaking on the sidelines of a Singapore forum led by China Center for International Economic Exchange late on Wednesday.

Fu said sales declines should be viewed as part of the industry’s transformation towards higher production standards, lower-emission cars and new energy vehicles (NEVs), adding the association was still ultimately bullish about the future prospects of the market.

Around 28 million cars were sold in China in 2018, down 3% from a year earlier, the first sales drop since 1990s. Monthly sales dropped in September to mark the 15th consecutive month of decline.

A spokesman for CAAM in Beijing confirmed on Thursday the industry group expects an 8% decline in sales from the previous year, without disclosing further details.

Fu said China annual auto sales were ultimately still on track to hit 30 million by 2023 with further headroom, he said.

The sales slump has even extended to the NEV sector, due to subsidy cuts. NEV sales skidded 34% in September year-on-year following a 16% decline in August.

“The development of new energy vehicles is still at early stage, so talking about its growth now is not very meaningful,” Fu said.