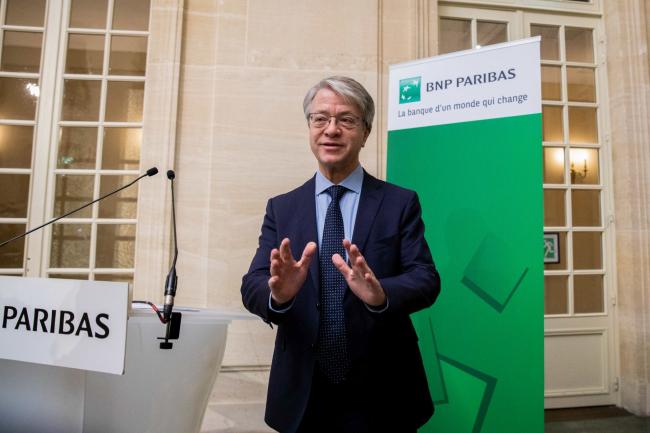 Fixed income, currency and commodity trading revenue surged 35% to 915 million euros ($1 billion) in the three months through September, according to a statement on Thursday. That surpassed the performance of competitors including Barclays (LON:) Plc and Deutsche Bank AG (DE:), and beat the 9% gain in the second quarter and a 29% rally in the previous three months.

Chief Executive Officer Jean-Laurent Bonnafe is slashing costs after tough market conditions complicated his plans to take on the trading might of U.S. banks. BNP has shut a proprietary trading unit and exited U.S. commodity derivatives to curb risk, while seeking to take advantage of Deutsche Bank’s retreat through the acquisition of the German lender’s hedge fund business.

“What is important is that we continue to serve clients and, therefore, grabbing market share,” Chief Financial Officer Lars Machenil said in a Bloomberg Television interview when asked if growth in FICC will continue.

FICC benefited from “a sharp rise in credit and primary issues, a rebound in forex and emerging markets, and a good performance of rates,” BNP said. That helped BNP’s global markets unit — its key trading division — post a 15% increase in revenue. Equity and prime services income fell though by the same amount, with the bank blaming a “lackluster market on flow activities,” countered somewhat by structured products.

Revenue grew 5.3% in the quarter, outpacing a 2% increase in costs. The bank’s common equity Tier 1 ratio, a measure of financial strength, rose 10 basis points to 12%.

“By division, the strongest beat came from global markets, mostly thanks to strong FICC,” Morgan Stanley (NYSE:) analysts wrote in a note to clients. “Capital is in line with consensus at 12%, which corresponds to BNP 2020 capital target.”

Like many other European lenders, the bank cautioned that the European Central Bank’s move to push interest rates deeper into negative territory will have an impact. “The new monetary policy measures occurred at the end of the quarter, and they will produce their full effect only in 2020,” BNP said.

Bonnafe cut 2020 earnings targets in February and announced an additional 600 million euros in cost cuts to weather a trading slump. The bank is targeting about 3.3 billion euros of expense reductions by 2020. That followed a particularly difficult end to the year, when it lost about $80 million on derivatives trades linked to the U.S. stock market. Last year, BNP was also caught on the wrong side of a selloff in developing-market assets and blindsided by the Turkish currency crisis.

The French bank is about halfway through its 2020 cost plan, but has so far stayed clear of suggesting any big job-cutting plans like those at Parisian rival Societe Generale (PA:) SA or the thousands of planned reductions at Deutsche Bank. Instead, BNP’s moves have included outsourcing equity research in Asia to Morningstar Inc.

“We’re investing in digital channels,” the CFO said. “Buying a branch network is not something we are looking at.” The lender has shut 356 branches in France, Belgium and Italy since the end of 2016.

BNP Paribas is targeting its spending to win clients in countries such as the U.S., the U.K. and especially Deutsche Bank’s backyard, Germany, where the mass of small and medium-sized companies have traditionally been the backbone of its export-oriented powerhouse economy.