It isn’t just you. The stock market is getting more volatile, according to a new method for measuring its gyrations, and that’s making life more of a challenge for investors as they attempt to navigate the ups and downs.

In a Tuesday note, DataTrek Research co-founder Nicholas Colas highlighted a volatility measure that starts with daily returns on the S&P 500 SPX, +0.04%  for any given year and adds them up, but turns the negative days into a positive sign.

The resulting total absolute daily return mimics what a day trader with 100% knowledge of the next day’s market direction could make by simply going long or short at the previous day’s close, Colas explained, while also offering a measure of what a buy-and-hold investor sees in terms of daily perceived stock market volatility (see chart below). 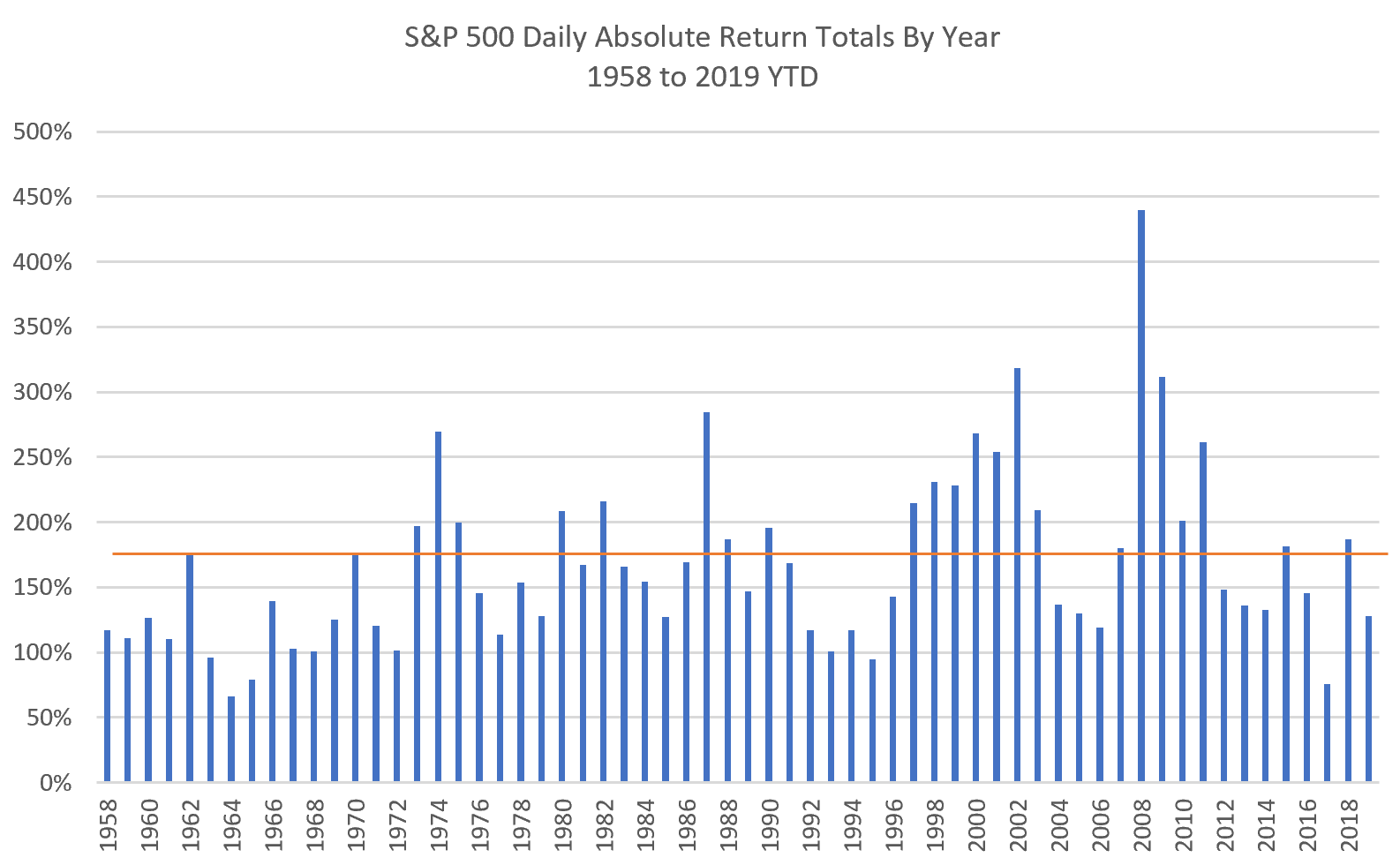 Colas and company then did the math for the S&P 500 SPX, +0.04%  going back to 1958 and found that absolute daily return volatility has risen steadily over the years. Here’s what he found, broken down by 10-year periods in the table below:

The annual average for the entire period is 167.6%, with the last decade below that mean being 1988-1997, Colas noted, also emphasizing that 2018’s absolute daily returns totaled 187%, well above the long-run average. In other words, volatility has been rising steadily over time.

“The bottom line here: rough years, with or without single-day crashes, re getting tougher,” Colas wrote.

“‘Easy money’ years are fewer and further apart and the payoffs seem to be lower as well,” Colas said.

What about this year? So far, absolute daily returns for the S&P 500 through Friday totaled 128%, and were on track to end the year around 150% — pretty close to the average since 2010 of 160% and the long-run mean of 168%, Colas noted. In other words, 2019 isn’t as “quiet” as it’s often made out to be given a reading of the Cboe Volatility Index VIX, +0.76%  — a widely followed measure of expected volatility over a coming 30-day period — that’s largely stayed below its long-run average of 19. Instead, it’s pretty average.

What’s behind the long-run rise in volatility? Colas said it boils down to “complexity.” A more globalized world makes corporate cash-flow streams less predictable, he said, due to increased competition and variations in economic growth across regions. Technological disruption is also playing an increasing role.