Since its launch almost 13 years ago, Apple’s iPhone has captured 87% of smartphone profits despite selling only 18% of smartphone units. Today there’s clear evidence that mobile is plateauing, threatening those sky-high earnings.

Investors should pay attention to those signs, as analysts raise their price targets on the company’s stock AAPL, -1.37%  by playing up services, including a new TV-streaming service that is being introduced very late in the game.

The smartphone market contracted to 1.462 billion units in 2017 and to 1.420 billion units last year. While almost 1.5 billion smartphones sales a year globally is substantial, the law of saturation drives down prices. I wrote about the price effects of mobile saturation in March, prior to Apple lowering prices for the first time with the iPhone 11.

IDC, a telecommunications-research firm, updated its numbers last month to reflect an anticipated decline of 2.2% to 1.37 billion units in 2019. The company is forecasting a mere 1.1% compound annual growth rate (CAGR) over the next five years through 2023.

China represents about one-third of smartphone penetration compared with the U.S., at one-12th. Pricing wars are evident in Asia, where China’s Huawei has grabbed market share to become the world’s fastest-growing smartphone seller. The company has seen a 66-fold increase from 3 million units sold in 2010.

Recent data show that native Chinese companies like Oppo and Xiaomi are nipping at Apple in third place. This has resulted in a price war because Chinese phones often have better features. Last year Apple had to reduce iPhone prices in China as a result of weak purchases by the Chinese.

Samsung SSNLF, +0.00%  may be the true bellwether for mobile, as the company is in first position for total smartphones shipped and is the world’s largest manufacturer of memory chips. In the first quarter, the company reported a 60% drop in operating profits, followed by a 56% decline in the second quarter. Analysts expect another decrease in the third quarter. Smartphone units have been making lower highs and lower lows over the past two years. 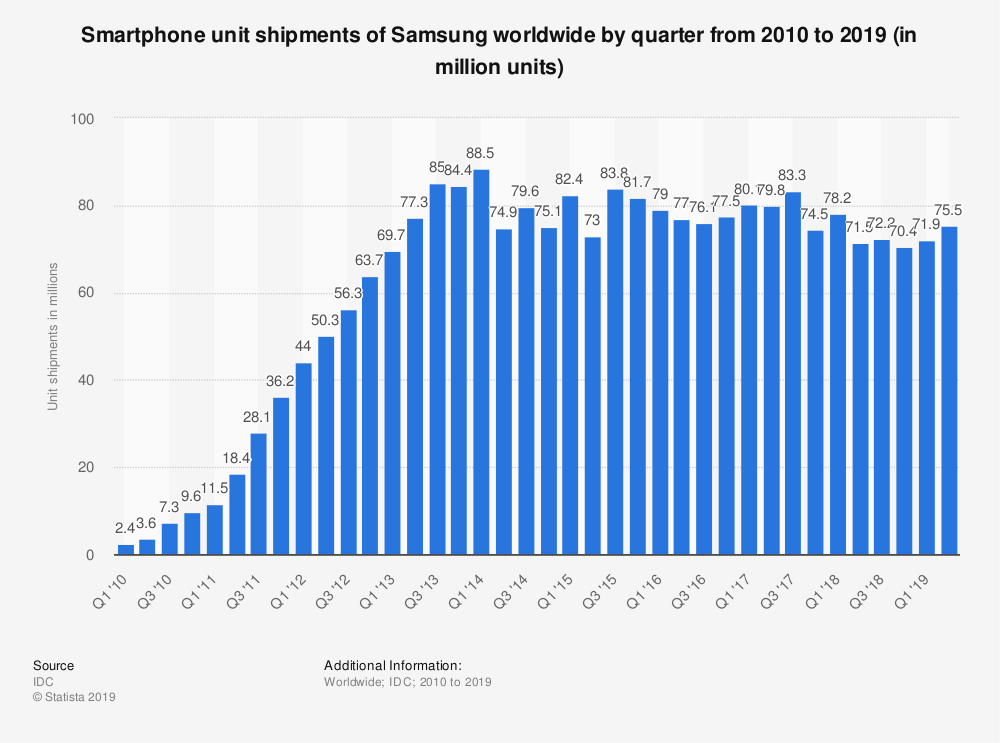 Samsung’s disappointing performance hints at the ties between smartphone sales and consumer confidence as China’s confidence index is languishing at a two-year low.

Notably, IDC forecasts the pricing wars will continue with 5G handsets in Asia, as low-cost models are expected to hit the market next year. In the U.S., Latin America and Japan, the average selling price (ASP) of a 5G handset will be around $1,000, while it will be $600 in China.

In the excitement of Apple’s new TV+ streaming service and other services revenue, which accounts for one-fifth of Apple’s total revenue, the market has overlooked the big picture of overall revenue decline. Instead analysts are predicting a perfectly synchronistic hand-off.

Full-year revenue is projected to decline by $7 billion to $258 billion at the midway point. Some of this is reflected in the price-to-sales ratio, although the price-to-earnings ratio is high for a company with sagging growth.

Typically, a major sell-off would occur for any technology company that posts quarterly revenue growth of 1% and a 7% drop in diluted earnings per share. Yet, the shares are trading at all-time highs as investors are lured by the dividend and recently announced stock buybacks.

Though Apple has staggering revenue and $50 billion in cash reserves, Apple is hardly a growth company anymore, with a double-digit iPhone decline and a single-digit revenue drop.

Many sources are reporting that iPhone 11 sales in September are better than in the previous year. However, Apple’s approach to releasing the iPhone 11 is also different than in years past. The company has chosen to do an immediate roll-out of all three models rather than a tiered roll-out, which could affect future quarters.

Even with a temporary boost in iPhone 11 sales, the pattern of the iPhone decline is carrying inertia. The bigger concern, which will not appear in the earnings report scheduled to be released Wednesday, is that consumer confidence may wane in the future. This has not happened to Apple for nearly a decade, as consumer confidence has sat at the 100 mark, in line with the historic bull market in stocks. When this occurs, the effects of mobile saturation will accelerate. 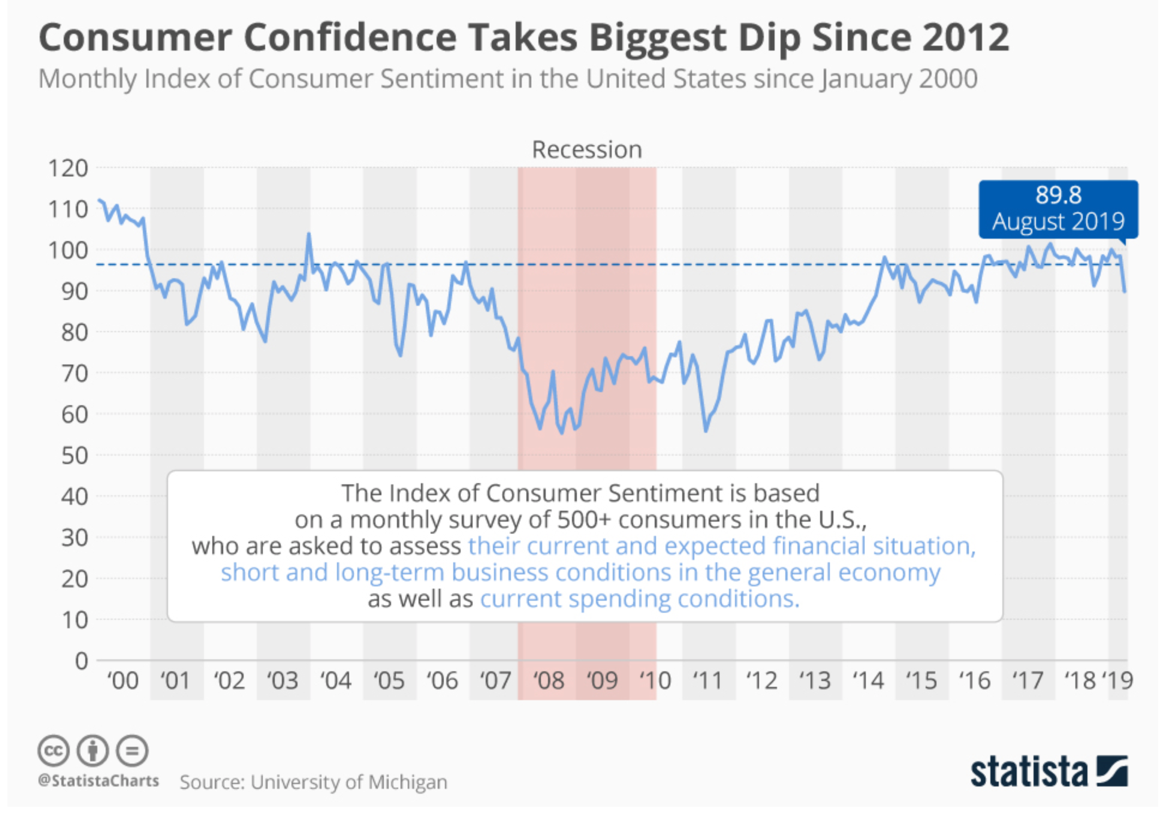 To confuse matters, analysts are raising Apple’s price target based on fiscal 2020 Apple TV+ revenue with little discussion of the forecast for Apple’s main growth driver. Apple TV+, which will compete with Amazon AMZN, -0.76%  Prime Video, Netflix NFLX, -0.67%  and other TV-streaming services, is more likely to cause bottom-line losses in the short term as Verizon VZ, +0.12%  is offering the subscription for free while requiring costly original content from headliners such as Oprah. (She doesn’t come cheap.)

These new price targets seem more like an attempt to cover current positions, as the majority of institutions are holding this stock at lower entry points.

Although services and wearables revenue offsets the iPhone decline in the most recently reported quarter, historically this is the exception.

If the risks of iPhone saturation were more widely discussed and analysts’ price targets were in line with declining year-over-year and quarter-over-quarter revenue, my analysis would have a different tone. To put it simply, Apple is riskier in the long term than the market currently believes.

In fact, the saturation of the iPhone could prove to be one of Apple’s biggest challenges to date, as the company attempts to make many pivots, all of which will add noise to the big picture that mobile’s golden days are behind it. This will not be resolved by a single quarter’s earnings “beat,” nor will it be absorbed by services revenue until at least 2023.

The writer has no investment in Apple shares.

Beth Kindig is a San Francisco-based technology analyst with more than a decade of experience in analyzing private and public technology companies. She publishes a free newsletter on tech stocks at Beth.Technology and runs a premium research service.