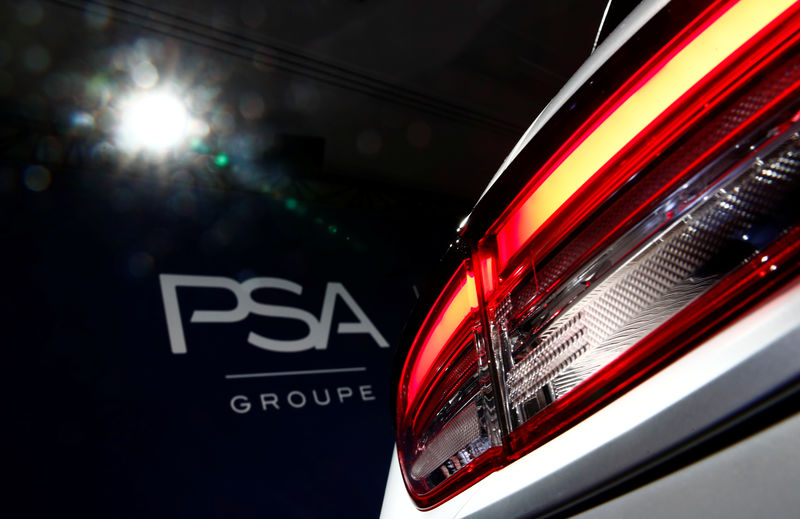 © Reuters. A PSA Group logo is seen behind a car displayed during French carmaker’s news conference as they announce the company’s 2018 results at their headquarters in Rueil-Malmaison

(Reuters) – Fiat Chrysler and Peugeot owner PSA are in talks to combine in a deal that could create a $50 billion automaker, a source familiar with the matter said on Tuesday.

The Wall Street Journal first reported the discussions. Fiat Chrysler shares rose sharply after the report and ended up more than 7.5% in U.S. trading. The companies had no comment.

Investors have speculated for several years that Fiat Chrysler was hunting for a merger partner, encouraged by the rhetoric of the company’s late chief executive, Sergio Marchionne. In 2015, Marchionne outlined the case for consolidation of the auto industry and tried unsuccessfully to interest General Motors Co (NYSE:) in a deal.

Evercore analyst Arndt Ellinghorst in a note on Tuesday said a combination of Fiat Chrysler and Peugeot “should ignite more rational industry behavior around allocation of capital and this particular merger makes materially more sense than a potential FCA-Renault merger.”

Elkann broke off talks with Renault in June after French government officials intervened, and pushed for Renault to first resolve tensions with its Japanese alliance partner, Nissan Motor Co. Following the collapse of the Renault merger plan, Fiat Chrysler CEO Mike Manley left the door open for talks with would-be partners. But he said the Italian-American automaker could go it alone despite mounting costs to develop electric vehicles and comply with tougher emissions rules in Europe, the United States and China. Peugeot CEO Carlos Tavares dismissed the idea of a combination with Fiat Chrysler during a discussion with reporters at the Frankfurt auto show last month. “We don’t need it,” Tavares said when asked whether he was still interested in a deal with Fiat Chrysler.

Tavares has moved aggressively to expand Peugeot, acquiring German auto brand Opel from General Motors Co for $2.6 billion in 2017. Since then, Tavares has overseen a turnaround at Opel.Fiat Chrysler already has a commercial vehicle partnership with Peugeot.