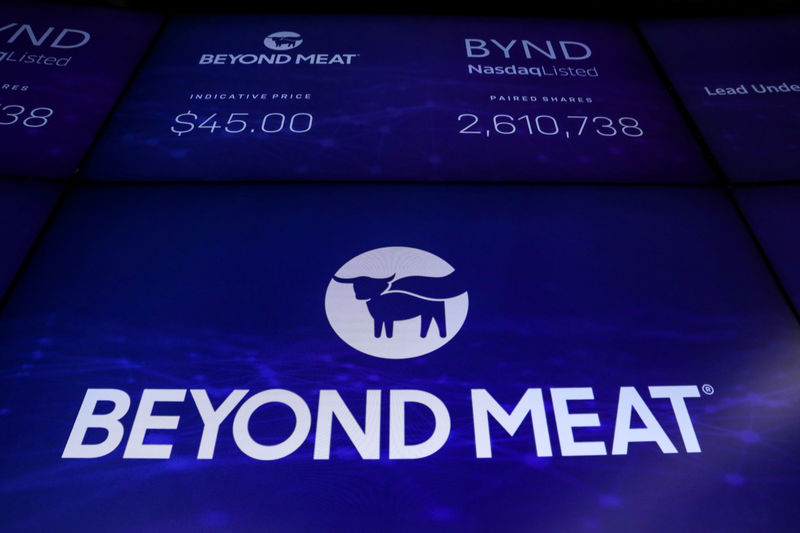 © Reuters. FILE PHOTO: The company logo and trading information for Beyond Meat is displayed on a screen during the IPO at the Nasdaq Market site in New York

By Nivedita Balu and Richa Naidu

(Reuters) – Shares of Beyond Meat Inc (O:) plunged more than 20% on Tuesday as investors rushed to cash in after a restriction on selling stock lifted and worries mounted about rising costs and increased competition at the hugely popular plant-based meat producer.

A surge in interest in plant-based burgers, sausages and other meat-lookalikes this year has spurred a doubling in value of the Los Angeles-based company since its stock market launch in May.

However, the restrictions on selling nearly 80% of the company’s outstanding shares ended on Monday, and analysts said expectations that some investors would lock in profits were weighing on the stock.

Along with Monday’s results release, the company announced the departure of venture capital specialist Gregory Bohlen from its board after more than six years with the company.

Bohlen said neither he nor his firm were selling stock on Tuesday. Bohlen owns 160,000 shares and his venture capital firm Union Growth Venture Partners owned about 735,000 shares after the IPO.

“I might sell a portion of it down the road, but I suspect I’m going to keep Beyond Meat in my portfolio for a really long time.”

Similarly, Ray Lane, one of Beyond Meat’s first investors who sits on the company’s board, said he did not sell his shares and would remain a long-term holder. Lane owned 256,108 shares in Beyond Meat immediately after the IPO, according to a filing with the Securities and Exchange Commission.

“There was so much short-selling and lockup pressure on the stock that today was just the perfect storm, but even at $80 or $90 per share, Beyond Meat’s value is still a significant multiple on earnings.”

Lane, a former partner at Beyond Meat investor Kleiner Perkins Caufield and Byers, said the venture capital fund distributed about 20% of its original shares to its limited partners. Those partners, including Lane himself, can now decide whether they want to sell the shares. According to Beyond Meat’s IPO filing, Kleiner Perkins held around 606,000 common stock at the time of the IPO.

At mid-day, almost 23 million shares – worth nearly $2 billion – had been traded, making it the stock’s fourth-busiest session since the IPO in May.

“What is less apparent, though, is the number of shareholders willing to sell with the stock down well over 50% from its high,” J.P. Morgan analyst Ken Goldman said.

“Either way, putting the lock-up expiry in the past ultimately should incent some investors to start buying the stock again.”

At their peak in July, Beyond Meat shares had risen five-fold in value from their debut price of $46 in early May. The stock has since retreated, and closed at $105.41 on Monday, valuing the company at $6.38 billion.

The vegan burger maker posted its first ever profit on Monday and raised its full-year sales forecast, but also said it would need to offer more discounts as competition heats up.

At least three Wall Street analysts cut their price target on the stock after the results, with J.P. Morgan’s Goldman reducing his target to $138 from $189.