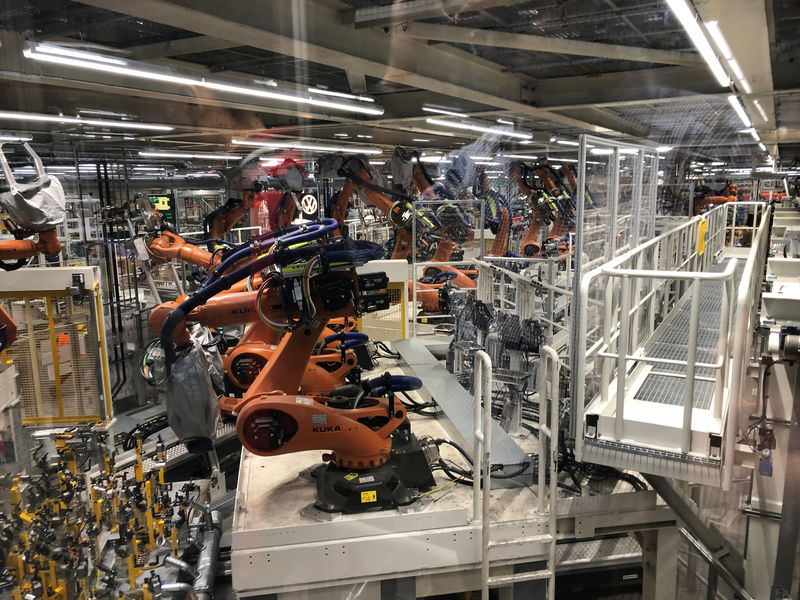 FRANKFURT/ZWICKAU (Reuters) – Volkswagen AG (DE:) is ramping up production of electric cars to around 1 million vehicles by end of 2022, according to manufacturing plans seen by Reuters, enabling the German carmaker to leapfrog Tesla (NASDAQ:) Inc and making China the key battleground.

Volkswagen is readying two Chinese factories to build electric cars next year. The Chinese plants will have a production capacity of 600,000 vehicles, according to Volkswagen’s plans, which have not been previously reported – revealing VW’s ability to industrialise production faster than other pioneers in the electric vehicle market.

Tesla is still trying to reach its goal of making more than 500,000 cars a year by building a new factory in Shanghai, China, while VW can rely on an established workforce in two of its plants in Anting and Foshun to build zero-emission cars.

The scale and speed of VW’s electrification push marks a shift in favour of established manufacturers that can use existing factories and profit from combustion-engined sport utility vehicles (SUVs) to scale up faster than startups.

“The truth is barriers to entry in autos remain high,” said Max Warburton, an analyst at Bernstein Research. “Making cars is hard. The move to electric vehicles will be expensive, but will probably be led by traditional manufacturers.”

VW is leveraging its large infrastructure of suppliers, factories and workers, long a handicap to its profitability, more aggressively than rivals BMW, Renault SA (PA:), General Motors Co (NYSE:) and Tesla, which were all quicker to sell a custom-designed electric car.

Rather than adjusting production gradually, and using multi-powertrain platforms, Volkswagen is making a massive bet on a dedicated electric vehicle architecture, known as MEB, in the hope of increasing economies of scale sufficiently to push down the price of electric cars to around 20,000 euros ($22,262).

The Wolfsburg, Germany-based carmaker is retooling eight plants across the globe by 2022 to specialise in manufacturing electric cars, and license its electric MEB platform to rivals, senior VW executives told Reuters, putting it on track to become the world’s largest maker of zero-emission vehicles.

“The question is, can you expand your production quickly enough? The capital intensity is increasing,” Diess said.

To fund its own electrification shift, the German carmaker aims to increase sales of VW SUVs, with combustion engines, to 40% of overall sales by 2020 from 23% in 2018.

The powerstation that supplies energy for VW’s flagship e-vehicle factory in Zwickau, Germany, marked by two tall chimneys, was built to power production of the combustion-engined Volkswagen Golf.

Now Zwickau can piggyback off this infrastructure to ramp up production to 330,000 VW ID electric cars by 2021.

Volkswagen Group will increase economies of scale by rolling out electric vehicle platforms to its Audi, Skoda and Seat and Porsche brands.

Volkswagen Group will be in a position to build 22 million electric cars by 2028, of which 11.6 million could come out of Chinese factories, VW said.

VW’s expansion push comes at a time when investors have started to question businesses delivering growth without real profit, a change in sentiment that is crippling the ability of several electric car pioneers to raise more cash.

Tesla’s struggles have dampened optimism about how easy it is to enter the car business, making it harder for China’s NIO, backed by internet company Tencent Holdings Ltd, as well as others like Faraday Future and Byton Ltd, to fund the next stage of growth: capital-intensive volume production and sales.

“So much respect for those doing high volume manufacturing, Tesla CEO Elon Musk tweeted earlier this month. “It’s insanely hard, but you make a real thing that people value. My hat is off to you.”

After starting trial production runs at its factory in Shanghai, Tesla now hopes to reach its 500,000-vehicle target in the 12-month period ending June 30, 2020. Tesla is also looking for a site to start production in Europe.

It will retool plants in Emden and Dresden in Germany, Mlada Boleslav in the Czech Republic, and Chattanooga, Tennessee, in United States, as part of a 30 billion-euro ($33.24 billion)investment push into e-mobility by 2023.

As a result, Volkswagen Group will be the No. 1 electric vehicle producer globally by 2025, while Tesla is likely to remain a niche player, according to UBS autos analyst Patrick Hummel.

The cutthroat rivalry between automakers and software companies started when Alphabet (NASDAQ:) Inc’s Google presented a prototype autonomous vehicle in 2012, leading analysts and industry executives to fear a so-called Nokia (HE:) moment. This occurs when a new player from the tech sector unveils a superior design, in the way that Apple Inc (NASDAQ:) presented the iPhone in 2007, ending Nokia’s dominance of the mobile handset business.

Today, Tesla’s cars are generally perceived as cutting-edge and potentially more sophisticated than VW’s. Volkswagen’s ID.3, which starts production this year, has an operating range of between 330 and 550 kilometers (205 to 341 miles), below the 560 km long-range Model 3 version offered by Tesla.

That is because Tesla has a sophisticated software algorithm to control how much electricity goes to the electric motor, air conditioning, seat heaters, in-car infotainment, and cooling system.

The VW vehicle’s lower price comes from the carmaker’s ability to place large orders which, by nature of their size, help drive down the price. Volkswagen is investing 50 billion euros ($55.5 billion) to buy battery cells and will also license its MEB electric car platform to rival carmakers to further increase economies of scale.

That is, Volkswagen will make that huge investment if suppliers can keep up.

“There is a lot of investment,” Stefan Sommer, Volkswagen Group’s board member responsible for procurement, told Reuters last month. “But even the big companies like Samsung (KS:), CATL, LG Chem, the big guys, SK, they hesitate to take so much money and invest because they are not seeing the market on the other side.”

“We are now seeing the first battery plants, LG in Poland, CATL in Germany, they don’t have the skilled workforce. That will be the bottleneck,” Sommer said. “It’s a learning curve everybody has to work through. This will cause some lags in supply. We have no other choice.”

VW plans to license its electric MEB vehicle platform to rival Ford Motor (NYSE:) Co, which will give VW $10 billion in revenue over the next six years.

Thomas Ulbrich, Volkswagen’s member of the board who oversees production of electric vehicles, told Reuters, “Ford and Volkswagen’s agreement will be a blueprint for further licensing deals.”

In the short term, Volkswagen and its Chinese joint venture partners will invest 15 billion euros to produce 15 different electric cars for China alone by 2025.

“The first MEB-based vehicle is an SUV model,” Volkswagen said about its China push.