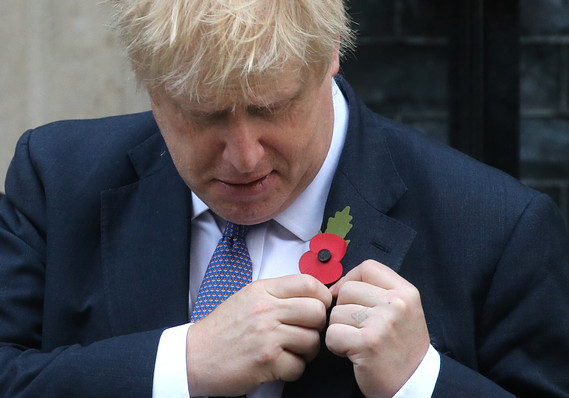 Britain’s Prime Minister Boris Johnson pins a poppy to his lapel on the steps of 10 Downing street as he meets with fundraisers for the Royal British Legion in central London on October 28, 2019.

The British pound held above the $1.28 level after the European Union granted a three-month delay to Brexit, ensuring that a no-deal departure won’t be imminent.

The European Union agreed to delay Brexit until Jan. 31 next year on Monday — just three days before it was due to take place.

The next step is likely to be a general election before a vote in the U.K. Parliament is taken on the withdrawal agreement.

HSBC Holdings HSBA, -3.98% slumped 4% as the bank said it can no longer hit next year’s target of an 11% return on tangible equity. The bank’s profit tumbled 24% in the third quarter on what it called challenging conditions.

Analysts at Jefferies said the bank had a relatively weak performance across foreign exchange, interest rates, credit and equities within its global banking and markets division. Hyperinflation from Argentina also hurt the bank’s results.