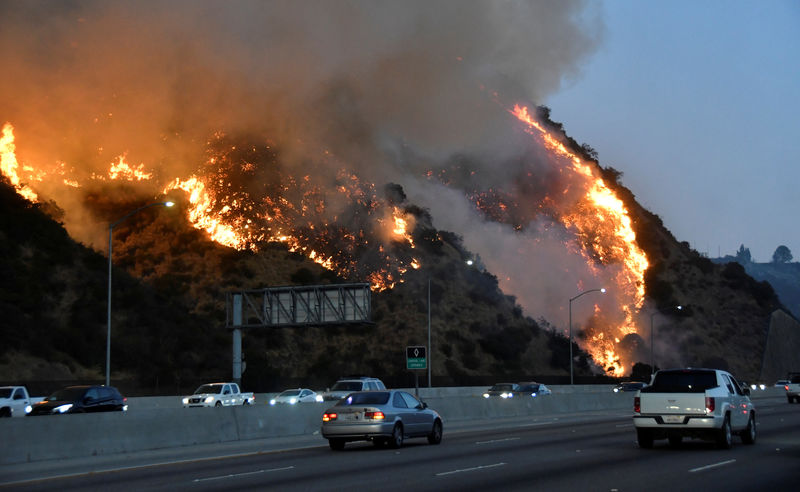 After a brief trading halt caused by its rapid fall, PG&E’s stock was down 16%, bringing its loss to nearly 50% since late Wednesday, when the Kincade Fire started in Sonoma County and rapidly became the worst blaze in California.

Crews on Sunday lost ground against the wind-driven fire that has blackened part of the state’s picturesque wine country and driven 190,000 people from their homes. The Kincade Fire is the worst of more than a dozen major blazes that have damaged or destroyed nearly 400 structures and prompted Governor Gavin Newsom to declare a statewide emergency.

While the cause of the Kincade Fire has not been determined, it appears to have erupted near the base of a damaged high-voltage transmission tower owned by PG&E, which is California’s largest investor-owned utility and serves the northern part of the state.

California’s wildfires generally erupt in the fall as hot, dry winds blow westward. High wind forecasts prompted PG&E to shut off power to about 940,000 customers in 43 counties on starting on Saturday to guard against the risk of touching off more wildfires. The utility said the protective blackouts could last two days.

PG&E filed for Chapter 11 bankruptcy protection in January, citing potential liabilities in excess of $30 billion from major wildfires in 2017 and 2018 linked to its equipment. Its stock market value has shrunk to under $3 billion from $25 billion a year ago.