Cracks have formed in the roughly $1.2 trillion leverage loan market that could bring the sector closer to a “point of no return” should conditions in this corner of corporate finance further deteriorate, Bank of America Merrill Lynch analysts warned.

Debt-laden U.S. companies have turned to the leveraged loan market in droves over the past decade for easy credit with fewer strings attached, but the past 12 months have seen a sharp drop in appetite for this type of debt and more recent indications point to the potential for long-feared defaults to spike.

“We are seeing numerous new signs of tightening credit conditions just in the past few weeks and months, ranging from wide market bifurcation, to prevalence of downgrades, to rising distress, to lower availability of capital for the lowest rated names,” wrote a team of Bank of America Merrill Lynch analysts led by Oleg Melentyev, in a Friday note to clients.

“We believe these are very important developments that deserve our full attention; their further deterioration from here could indeed move us closer to the point of no return, where the forces of a cyclical turn become irreversible”, they said.

Red flags have been raised in recent years by credit rating agencies, regulators, the International Monetary Fund, and even by bankers in the business about dangers of the leveraged lending boom ending badly.

Jes Staley, chief executive officer at Barclays, in a bid to address fresh concerns about the market told Bloomberg TV in an interview Friday that recent struggles by banks, including Barclays, to offload some $2 billion of leveraged loans to buyers has “opened people’s eyes that it’s not a free ride right now.”

That wasn’t the case a short time ago when leveraged loans were easily snapped up by buyers with a penchant for high-risk corporate debt, even as companies were offering creditors flimsy protections and creative ways of projecting earnings on the decade’s biggest leveraged buyouts.

“There has been a lot of cheap money raised, with little-to-no restrictions or worries about covenants,” said Karissa McDonough, chief fixed-income strategist at People’s United Advisors, of the borrower-friendly terms.

“The assumption was that companies would have access to a lifeline forever,” she told MarketWatch. “But now it’s kind of like, who’s going to be left holding the bag?”

Apparently retail investors in loan funds have been asking the same question.

As of this week, they have pulled some $38.8 billion out of loan funds since November 2018, or about 34% of their assets under management, according to Goldman Sachs.

The exodus has been tied partially to the Federal Reserve’s recent path of interest rate cuts, which can dampen the appeal of floating-rate leveraged loans when dwindling rates of interest paid by borrowers mean less income flowing to debtholders.

While that’s not the best scenario for loan investors, it should mean corporate borrowers can more easily afford their debts, while helping to avoid steep cuts to their credit ratings that often foreshadow coming defaults.

And yet, this chart from Goldman Sachs shows that downgrades actually have accelerated among borrowers in the U.S. leveraged loan market despite declining interest rates, while their speculative-grade counterparts in the fixed-rate, high-yield bond market have held up. 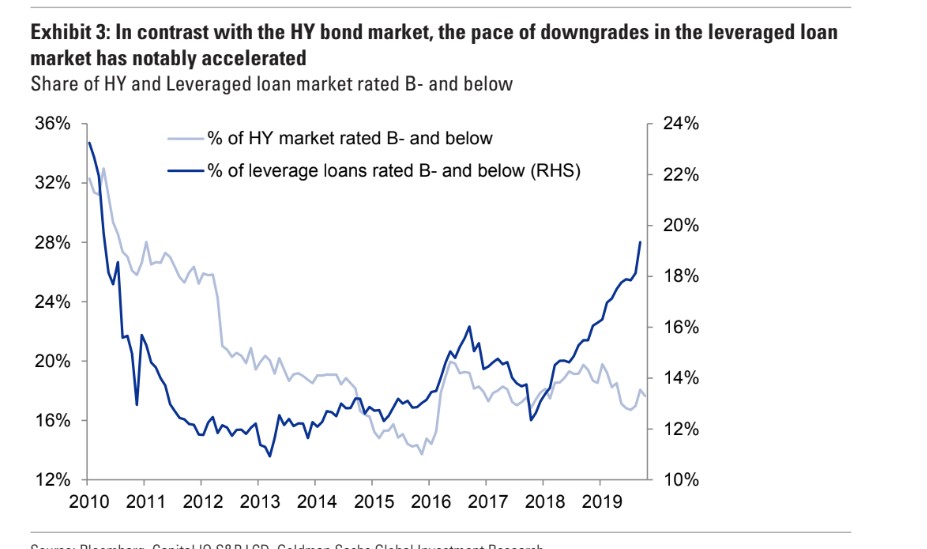 How do Bank of America analysts explain the trend? To be sure, they don’t expect the current weakness in leverage loans to trigger a mountain of losses in high-yield bonds, mainly because companies wanting the most leeway as borrowers sought out the once-hot loan market.

“Things may be different in loans, where some of the aggressively structured transactions from the past several years are now coming home to roost,” they wrote.