The Federal Reserve has gone into full intervention mode.

Actually, accelerated intervention mode. Not just a “mid-cycle adjustment,” as Fed Chairman Jerome Powell said in July, but interventions to the tune of tens of billions of dollars every day.

What’s the crisis, you ask? After all, we live in an age of trillion-dollar market-cap companies and unemployment at 50-year lows. Yet the Fed is acting like the doomsday clock has melted as a result of a nuclear attack.

Think I’m in hyperbole mode? Far from it.

Unless you think the biggest repurchase (repo) efforts ever — surpassing the 2008 financial-crisis actions — are hyperbole:

What is the Fed not telling us?
I’m asking for a friend. pic.twitter.com/BZK0XuLloV

What, indeed, is the Fed not telling us?

Something’s off. See, it all started as a temporary fix in September when, suddenly, the overnight target rate jumped sky high and the Fed had to intervene to keep the wheels from coming off. Short-term liquidity issues, the Fed said. Those have become rather permanent:

But market demand for overnight repo operations has far exceeded even the $75 billion the Fed has allocated, suggesting a lot more liquidity demand. Hence, on Wednesday the Fed suddenly announced a $45 billion increase on top of the $75 billion repo facility for a daily total of $120 billion. Here’s the Federal Reserve Bank of New York, the branch involved in such actions:

“Consistent with the most recent FOMC [Federal Open Market Committee] directive, to ensure that the supply of reserves remains ample even during periods of sharp increases in non-reserve liabilities, and to mitigate the risk of money market pressures that could adversely affect policy implementation, the amount offered in overnight repo operations will increase to at least $120 billion starting Thursday, Oct. 24, 2019.”

And, consequently, on Oct. 24 the Fed injected $134 billion in temporary liquidity.

These actions are surprising. What stable financial system requires over $100 billion in overnight liquidity injections? The Fed did not see the need for these actions coming. It is reacting to a market that suddenly requires it.

“Funding issues,” Chairman Powell called it in October. The Fed was totally caught off guard when the overnight financing rate suddenly jumped to over 5%, and it’s been reacting ever since.

What started as a slow walk in policy reversion from last year’s rate-hike cycle and balance-sheet roll-off (aka quantitative tightening, or QT) on autopilot has now turned into ongoing interest-rate cuts and balance-sheet expansion:

To be clear: This is not a temporary rise in the balance sheet; this is the beginning of something big. The Fed’s balance sheet looks like it will expand to record highs once again.

I keep questioning the efficacy of all this, and I have to question the honesty of the Fed. After all, the central bank keeps chasing events, and its policy actions are turning ever more aggressive while it insists that everything is fine. The bank’s actions are saying things are not fine. Far from it. Otherwise, the Fed wouldn’t be forced into all these policy actions. But would the Fed cop to things not being fine? To do so would be to sap confidence — can’t have that.

What would markets look like without these policy interventions? One can only wonder. For one, we know the overnight financing rate would be much higher. That is, after all, why the Fed is forced to intervene: To keep the target rate low.

Many analysts now suggest there will be a year-end stock market rally, primarily driven by the Fed as earnings growth remains weak. If they print, you must buy.

It may well be that our financial markets have permanently devolved into a Fed-subsidized, wealth-inequality-generating machine benefitting the few that own stocks. But one has to wonder why the rate cutting and liquidity injections haven’t been able to produce sustained market highs.

First came the hints in January. “Flexible on the balance sheet,” Powell suddenly was uttering following the fourth-quarter 2018 stock market massacre, producing a 3.5% rally in one day on that pronouncement. Then we got treated to a multi-month jawboning of Fed speakers increasingly sending dovish messages, and markets gladly jumping from Fed speech to Fed speech. Powell again rescued the market in early June after May’s market rout. “Ready to act” was the rallying cry then — and the market rallied dutifully into the July rate cut.

Did you note the accelerated pace of Fed actions here? The Fed went from pausing rate increases to ending the balance sheet roll-off to multiple rate cuts and, finally, aggressive daily repos and balance-sheet expansion. All of this since July. And guess what? Another rate cut is coming next week.

Why? Because markets want it. And what markets want, markets shall receive. That’s the only data point that matters, it appears.

And markets really want that third rate cut next week: 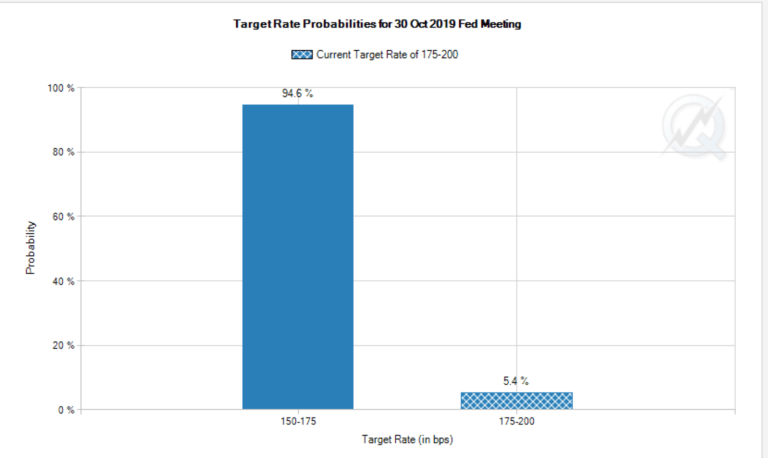 There’s a 94.6% probability of a rate cut. Think that a Fed that is intervening in markets daily by the tens of billions of dollars will chance to disappoint markets by not cutting rates? Please.

Investors have been chasing the Fed into corporate multiple expansion all year. But now that the Fed is forced to intervene ever more aggressively, it has to prove something: Efficacy.

And so one has to ponder a larger question:

But, to be fair, so far the Fed has succeeded in compressing volatility as price discovery has degraded to overnight action over any intraday price discovery. Markets are back to tight intra-ranges void of any actions and elevating indices near record highs.

Whether the Fed can prompt a move to sustained new highs remains to be seen. All eyes will be on the Fed next week to see whether policy makers can achieve it.

If they can’t, things may turn out quite differently, such as this speculative scenario:

You don’t think the Fed is all about markets? Where have you been? After all, the Fed’s stated policy objective now is to extend the business cycle by any means necessary. And policy makers can’t do that with falling stock prices.

And so they are in accelerated daily intervention mode. Because that is what it takes. The questions that investors have to ask themselves is: What if it’s not enough? And what is it policy makers aren’t telling us? Why are they are forced into these historic, unexpected measures? What happens if they lose control? We may know more next week.