Home
Stocks
The Fed: Three things to watch when the Fed meets next week
Prev Article Next Article 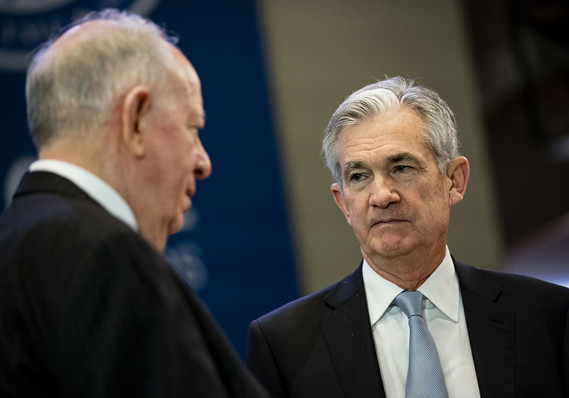 Fed Chairman Jerome Powell during a break at the IMF/World Bank annual meeting earlier this month.

At the last Fed interest rate setting meeting in September, the 17 policy makers were divided into three groups: five who disagreed with the decision to lower interest rates for a second time this year; five who agreed with the rate cut but didn’t want any more cuts, and seven who were calling for another quarter percentage point cut.

With all this division and opposition to more monetary policy easing, it is remarkable how little doubt there is among economists that the Federal Reserve will cut its benchmark Fed funds rate on October 30th by a quarter point to 1.5%-1.75%.

“With the markets still fully pricing in another 25 basis point cut and officials doing nothing to push back against those expectations, there is little point trying to deny that reality,” said Paul Ashworth, chief North American Economist at Capital Economics.

However, Tom Porcelli, chief U.S. economist at RBC Capital Markets, thinks the seven officials calling for another rate cut this year are all voting members of the 12 member Federal Open Market Committee (FOMC), the Fed’s interest-rate setting committee. That gives them the majority on the committee, which consists of five Federal Reserve board governors, the New York Fed president, and a rotating group of four of the remaining eleven regional reserve bank presidents.

There is some talk that the differences of opinion may lead the Fed to pause after next week’s meeting and take a ”wait and see” stance before any further rate cuts.

Economists also think three rate cuts in a row meets the historical definition for “a mid-cycle adjustment” referenced by Powell when the Fed cut rates for the first time in a decade earlier this year.

Here’s a look at what economists and investors will be watching for when the Fed concludes the two-day meeting in Washington next week:

What will the Fed’s statement and press conference signal ?

“The real question is what, if anything, will the FOMC signal,” said Roberto Perli, an analyst with Cornerstone Macro. Perli thinks the Fed might signal the bar for additional rate cuts is getting higher.

Back in 1998, the Fed statement was blunt after it cut rates three times in a row, saying the easing of financial conditions at that time should sustain economic growth with low inflation.

But Perli said he didn’t think the Fed would mimic the 1998 language because policy makers are not as sure as they were then about what will happen next.

He said the Fed would send a more “subtle” message, adding language it was still prepared to ease “if necessary.”

Derek Holt, head of capital markets economics for Scotiabank in Toronto, said the Fed will keep the guidance similar to its message since the summer: the Fed is not on a preset course and will “act as appropriate.”

The Fed has realized they can’t commit to be patient, given the zigs and zags of President Trump’s international trade policy, Holt said. “They want to keep their cards close to the chest,” he added.

Avery Shenfeld, chief economist at CIBC Capital Markets, thinks some type of pause language will be necessary to get officials to vote for a rate cut. “The doubters will want some wording to suggest a pause is now in order,” Shenfeld said.

If the Fed doesn’t send any signal and leaves the statement virtually unchanged, the market will likely infer that the odds that another cut is coming in short order are a lot higher that presently thought and cause a rise in stocks SPX, +0.28%   and bond prices , Perli of Cornerstone Macro added.

However, if the central bank sends a signal the bar for further rate cuts is getting higher, this would be moderately hawkish, he said. Any hint of “patience” would likely strengthen the U.S. dollar DXY, +0.15%, said Oscar Munoz, U.S. macro strategist at TD Securities.

James Sweeney, chief economist for Credit Suisse, said he didn’t think Fed chair Powell would signal the end of this cycle of rate cuts. “We do not expect the Fed to push back yet against market pricing for some additional easing,” he said.

The market now places low probability of a further rate cut in December, and investors are not pricing another policy easing until the March meeting.

If the Fed eases by a quarter-point, there might be as many as three dissents in favor of standing pat. Three dissents at a FOMC meeting is rare and would signal the limits of further rate cuts in the near term.

Economists are divided over whether Charles Evans, the president of the Chicago Fed, will go along with the rate cut or dissent with Boston Fed President Eric Rosengren and Kansas City Fed President Esther George.

Market volatility in the short term money market drove the Fed to ramp up the size of its balance sheet and inject temporary liquidity in the past month. Economists are watching to see how the Fed addresses the topic next week. In an unannounced meeting earlier this month, the Fed extended repo operations into early next year and said it would begin to buy $60 billion of Treasury bills a month into next year. On Thursday this week the Fed increased the size of its daily and term offerings of liquidity.

See: Fed says it will start to buy Treasury bills next week to ease money-market pressure

Fed watchers are hoping the Fed will provide more clarity about the need for a standing repo facility and how large a balance sheet the Fed now envisions.

“These short-term funding pressures will be with us for quite a while,” Holt of Scotiabank said.

The U.S. Treasury yield curve is no longer inverted either. Still, recession models using the spread between the 10-year and the 3-month T-bills suggests the odds of a recession in the coming 12 months are as high as 25%, Ashworth of Capital Economics said.