A bumper week of earnings may be catching the eye of investors, but trade tensions are never far away.

Amazon shares will hog the limelight on Friday after the e-commerce giant’s profit fell for the first time in two years and it warned of a weaker holiday period.

But U.S. and China trade officials will also meet as Beijing requests existing and planned tariffs be cancelled in exchange for buying more U.S. agricultural products.

Jefferies analysts Christopher Wood, in our call of the day, says existing tariffs could be unexpectedly dropped if a trade deal is reached, sending global stocks soaring.

He said: “Almost no one is expecting this but this is what should happen should a deal be agreed, since the tariffs were put in place by the Trump administration as leverage in a negotiation.

Wood said he was increasingly optimistic of a U.S.-China trade deal this quarter but that the key question was whether that would be a “mini-deal” or something more substantial in the form of tariffs being dropped.

However, if a deal was struck and tariffs stayed in place, Wood said it would signal a long-term slump in Sino-US relations.

Trade representatives have been thrashing out the wording of the agreement, which could be signed by Trump and Chinese President Xi Jinping next month.

China has reportedly asked for planned and existing tariffs to be dropped in exchange for buying more U.S. agricultural goods. 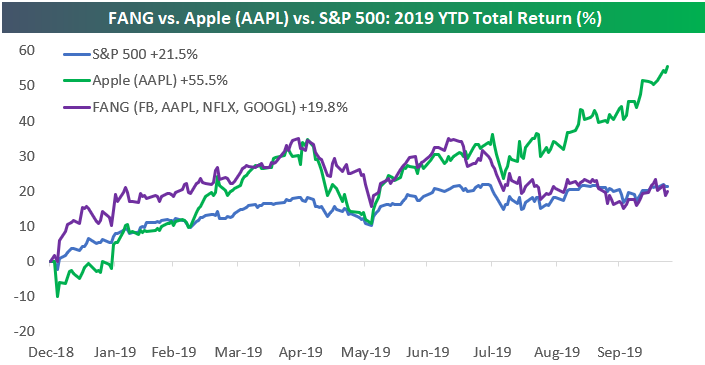 The fabled “FAANG” stocks, which includes Facebook, Amazon.com, Netflix, Apple and Google owner Alphabet, have had a mixed year and the trade is no longer what it once was.

This chart from Bespoke Investment Group, shows how one stock – Apple – has broken out and left the others in its wake.

Vice President Mike Pence said the U.S. does not want to seek confrontation with China on Thursday, but then criticized Beijing for its intervention in Hong Kong and its treatment of Muslim-minority groups.

Amazon.com’s profit fell for the first time in more than two years in the third quarter as shipping costs rose to a record $9.6 billion. The stock tumbled in late trading on Thursday as the e-commerce giant predicted another earnings decline in the holiday shopping season.

Barclays’ investment bank profits soared 77% in the third quarter but group profits were hit by a payment protection insurance charge.

The EU is considering granting another Brexit extension as British MPs mull a general election.

The cigarette-burned and unwashed sweater Kurt Cobain wore for Nirvana’s famous MTV Unplugged performance could fetch up to $300,000 at auction.

The world’s oldest donkey Bubbles has turned 60 and celebrated by tucking into a carrot cake.

A single shot of this whisky costs more than a brand new Porsche 911.

Meet the robotic vending machine that will bring you a Coke.