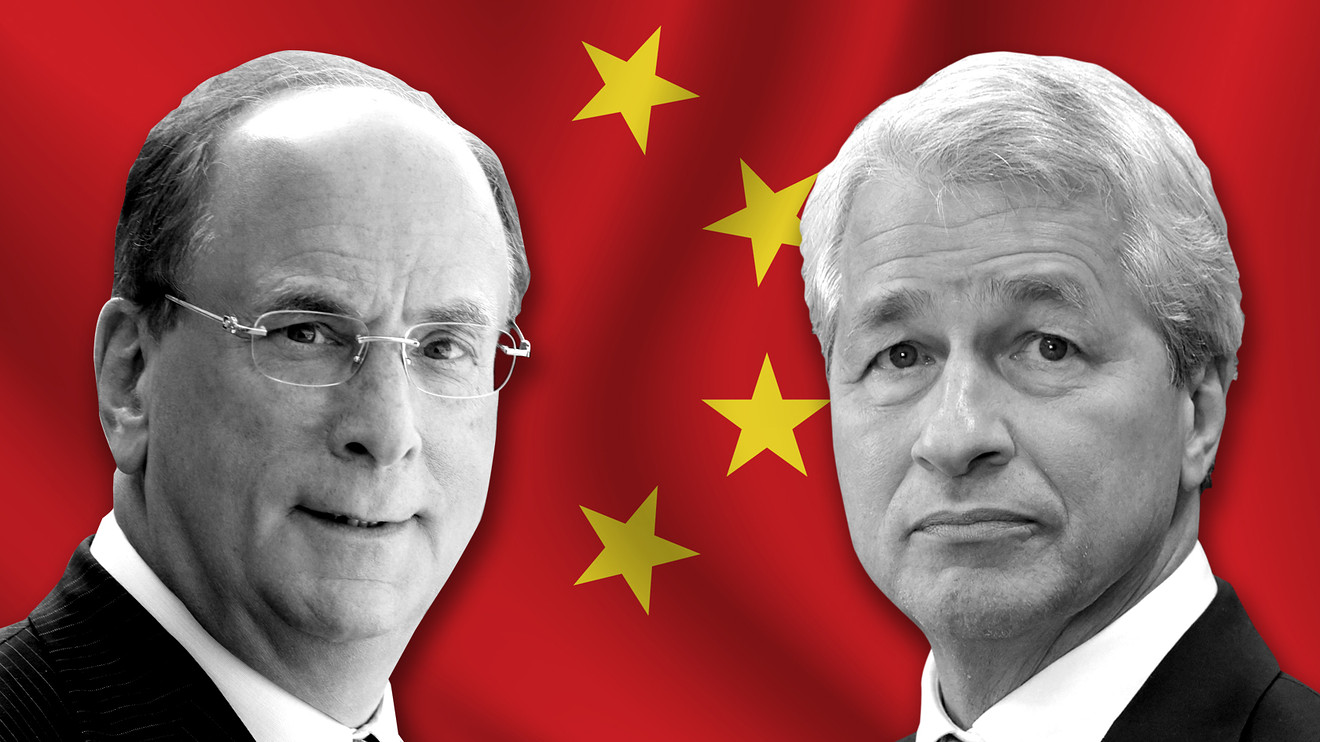 The trade war has caused corporate America to rethink its long-term commitment to doing business in China: Some 40% of corporate respondents to a September survey by AmCham China said they were considering moving at least some of their supply chains to other countries, or had already done so.

But even as corporate America sees the downside of putting too many eggs in China’s basket, Wall Street is stepping up. Index providers FTSE Russell and MSCI are dramatically increasing the weight of mainland Chinese stocks, which will soon dominate their emerging-markets indexes. Morgan Stanley and Goldman Sachs have moved to gain majority control of joint ventures in China as the Chinese government increasingly opens its markets to foreign investors.

But few have been more open about the importance of China to their growth prospects as JPMorgan Chase JPM, +0.80%, the U.S.’s largest bank, and BlackRock BLK, +1.13%, the world’s biggest asset manager with nearly $7 trillion under management.

Their CEOs, Jamie Dimon and Larry Fink, have put China at the center of their global growth strategies — while also being leaders in the drive to push U.S. corporations to become more socially responsible. That flies in the face of China’s Communist regime under president-for-life Xi Jinping, whose totalitarian policies conflict directly with core American principles of individual liberty and freedom of expression.

And yet Wall Street is as mesmerized by the prospect of 1.4 billion consumers and investors with cash to spare as were many American industrial and technology companies that gave away the store to Chinese partners through intellectual property theft and other depredations.

“We strongly believe in the future prospects of China,” a JPMorgan spokesperson wrote in an email. “It is a critical component of our growth plans, globally and in Asia. Our ongoing investments in China reflect our long-term commitment to one of the largest, fastest-growing and most exciting markets in the world.”

“We’re all in. We’re not slowing down,” Dimon told Bloomberg earlier this year.

In his 2018 letter to shareholders, Fink called China “one of the largest future growth opportunities for BlackRock.” He said Asia would account for half of the industry’s growth in assets under management over the next five years, “largely driven by China.” “Our goal,” he concluded, “is to become one of the country’s leading global asset managers.”

But in 2017, JPMorgan put out a report on corporate responsibility, noting proudly that it was ranked No. 1 on Fortune’s 2017 “Change the World” list, whose latest headline is “Delivering on the Promise of Purpose Beyond Profits.”

“We are proud that our firm’s corporate responsibility efforts are being recognized,” the company said in the report. ”But even more so, we are proud that we are making a real difference in our communities.”

And in August, the Business Roundtable, of which Dimon is chairman, got lots of buzz for a statement that committed its CEO members to run companies “for the benefit of all stakeholders — customers, employees, suppliers, communities and shareholders”—not just shareholders.

In a January 2018 letter, Fink, who also is a member of the Business Roundtable, called on CEOs of big companies—in which BlackRock is often a major investor—to make big changes in corporate governance and do a better job serving their communities.

“Society is demanding that companies, both public and private, serve a social purpose,” he wrote. “To prosper over time, every company must not only deliver financial performance, but also show how it makes a positive contribution to society.”

Those principles face a big test in China. Under Xi, the country has tightened its grip on its population, creating a high-tech surveillance state even George Orwell couldn’t have imagined. In the far western province of Xinjiang, it has incarcerated up to two million Uighur Muslims in “re-education camps” where some have been tortured, sexually abused and forced to renounce Islam and pledge loyalty to the Communist Party, as the Council on Foreign Relations explains.

China has yet to crack down completely on pro-democracy protests in Hong Kong, but Xi recently warned, “Anyone attempting to split China in any part of the country will end in crushed bodies and shattered bones.”

JPMorgan Chase didn’t respond to specific questions about its involvement in China.

A BlackRock spokeswoman emailed remarks Fink had posted on LinkedIn about doing business with another bad actor, Saudi Arabia, as an example of the firm’s concerns for human rights in countries in which it does business. “The murder of Jamal Khashoggi was horrifying,” he wrote. “There is much Saudi Arabia needs to do to demonstrate that it is truly committed to reforms that strengthen the rule of law and the rights of all of its people.”

It’s good that he spoke out. BlackRock also says investing in China “will take time and patience.”

It will take a lot more than that. For Wall Street, as for many U.S. companies, a big clash is coming between Chinese money and American values. I’m not optimistic they’re going to make the right choice.

More on the U.S. and China:
Prev Article Next Article