Shares of 3M Co. took a dive Thursday, after the diversified consumer, industrial and health care products maker beat third-quarter profit expectations but missed on revenue and lowered its earnings outlook, citing “challenging” macroeconomic conditions, including slowdowns in the U.S. and China.

The stock MMM, -3.94%  slumped 4.4% in afternoon trading, enough to make it the biggest decliner among the Dow Jones Industrial Average’s DJIA, -0.24%  components. The $7.31 price decline was shaving about 50 points off the Dow’s price, or the bulk of the Dow’s 73-point drop.

“We continued to face softness in certain end markets; namely China, automotive and electronics, which represent 30% of our company,” Chief Executive Michael Roman said on the post-earnings conference call with analysts, according to a FactSet transcript.

The company behind brands such as Post-it, Scotch, Nexcare and Command, said ahead of the open that it expects fourth-quarter net earnings per share of $2.05 to $2.15, which includes a one-time 15-cents per share negative impact from the recently completed acquisition of Acelity Inc. The FactSet consensus is $2.31 for net EPS and $2.38 for adjusted EPS, which excludes non-recurring items.

Roman said the outlook reflects the “expectation of continued softness” in China, as well as automotive and electronics. 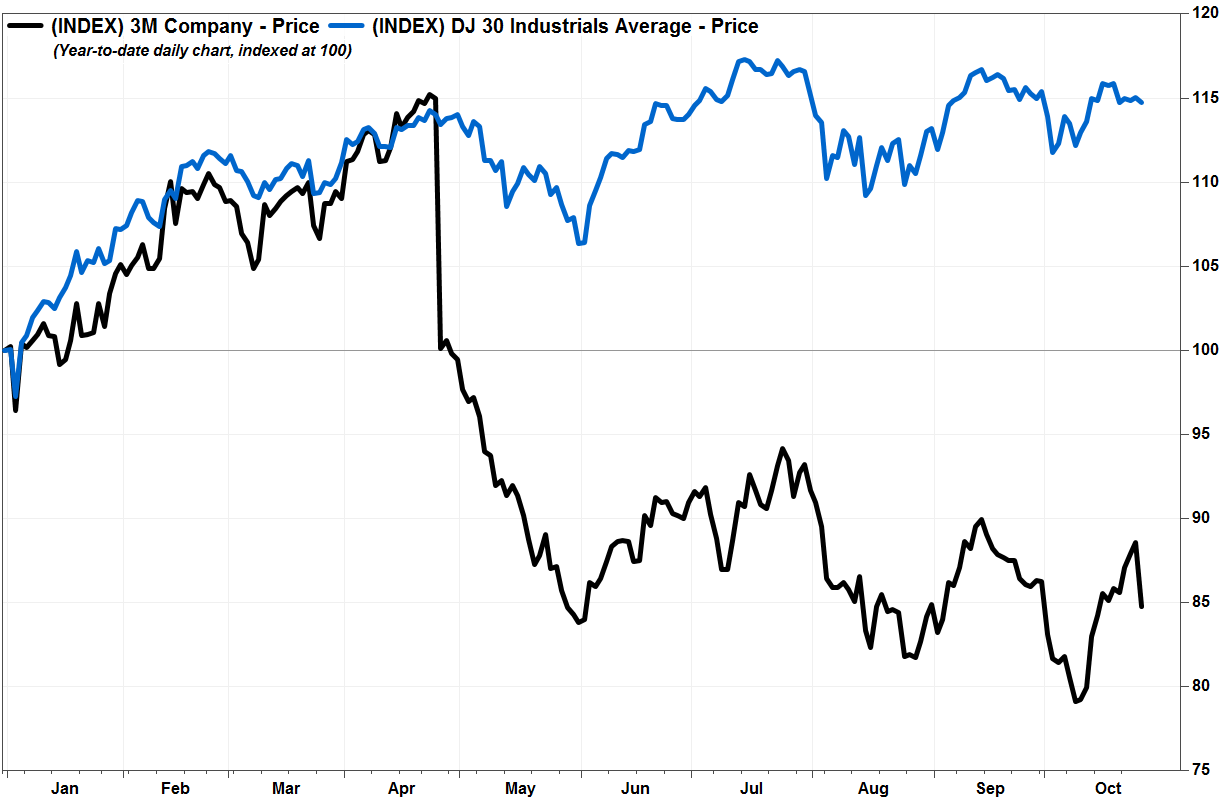 But China’s isn’t the only economy contributing to the downbeat outlook. Underlying sales in the U.S. also fell from a year ago, given particular weakness in its safety and industrial and transportation businesses, which softened further as the quarter progressed. And conditions aren’t expected to get any better the rest of the year.

When analyst John Inc. at Gordon Haskett asked more specifically about the company’s read on the U.S. economy — “But what’s going on in the U.S.?” — CEO Roman said that a “significant decline” in industrial production was seen, with the fourth-quarter projected to go negative.

“So you’re seeing a broader impact on industrial production, broader manufacturing,” Roman said. “We’re certainly seeing that and that’s impacting our safety and industrial business. Our auto business is certainly caught up in that.”

He said that health care saw “good growth,” and consumer and retail spending continued to be “strong” in the U.S.

“But that broader industrial manufacturing set of markets is weighing on the U.S. results, and then we saw — with that slowdown, we saw additional channel actions in the quarter,” Roman said.

It has been a tough year for 3M investors, as the stock has tumbled 15.3% year to date while the Dow has gained 14.7%. The stock slumped in July after the company disclosed an internal investigation into potential violations of the U.S. Foreign Corrupt Practices Act (FCPA), citing concerns arising from marketing efforts by certain business groups in China. In April, the stock suffered the biggest one-day selloff in over 30 years after a disappointing first-quarter report.

And the company continues to fight litigation related to the sale of products made using perfluorooctanyl compounds (PFOA and PFOS) and lawsuits for damages suffered by users of its respirator masks.

Regarding the third quarter, 3M reported net that rose to $1.58 billion, or $1.72 a share, from $1.54 billion, or $2.58 a share, in the year ago period. The results include a one-time divestiture gain of 14 cents a share. The results beat the FactSet consensus for net earnings per share of $2.51, and the consensus for adjusted EPS, excluding one-time items, of $2.49.

“While the macroeconomic environment remains challenging, we executed well and built on the progress we made in the second quarter,” Roman said. “Moving ahead we’ll continue to focus on driving operational improvements and investing for the future, which will position us for strong growth and premium returns as our markets recover.”