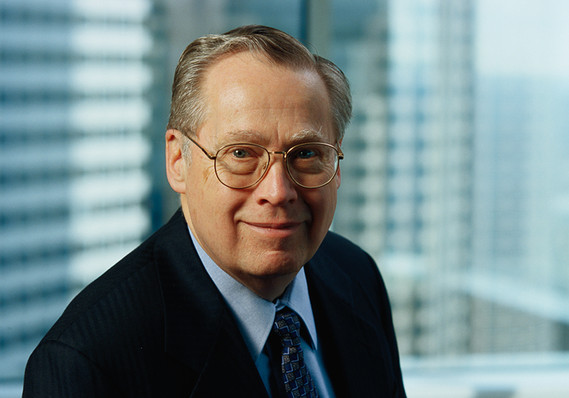 Veteran bond investor Dan Fuss nearly passed on the chance to buy a U.S. Treasury bond at a 15%-plus yield. Now he is urging investors not to miss the chance to finance climate-friendly technologies.

The trade war between the U.S. and China may have damaged manufacturing supply chains and slowed growth in the world’s two-largest economies, but the manager for the flagship $10.7 billion bond fund of Boston-based investment firm Loomis Sayles thinks investors should look for silver linings too, particularly if the eventual resolution of the tariff battle also helps the world reduce its carbon footprint.

Fuss says it’s important that the U.S. and China resolve their differences if only to deal with a more important issue -— climate change. Their cooperation could help bring about what he describes as an “immense investment opportunity” for those willing to provide capital and technologies to companies looking to help society adapt and slow down the pace of climate change.

See: Legendary bond investor: When trade war escalates, stay away from this corner of the market

“It’s time to globally get our act together,” he told MarketWatch. “Right now, that’s far and away the most important thing. It presents an enormous opportunity, but it’s dependent on geopolitics.”

Fuss feels investors should wait for opportunities in the market to provide chances to put money to work, and to be willing to take them up, even against the prevailing tide of conventional wisdom.

To underline that point, he described how on the last Thursday of September, 1981, a Salomon Brothers broker rung him up in the morning to offer a long-dated U.S. Treasury bond for sale.

Working at Loomis Sayles’ former office in Boston’s financial district, he needed cajoling to buy the 15-year tenor security, mainly because he felt there were richer pickings in the corporate debt space, but the investment’s 15.75% yield turned out to be the highest on record for federal government debt.

After that month, “rates started to go down for whatever reason, and I still don’t understand it,” said Fuss, who added that the fall in yields to levels where many investors now pay interest to buy and hold European bonds to maturity is remarkable.

That said, opportunities to invest in technologies that help offset a rapidly changing climate haven’t yet trickled down to fixed-income investors like Fuss.

“You can pick up one or two things that don’t involve much money and where you see the potential right now, but not enough that it’s ready to be anything major. You’d be lucky to get 1% of your portfolio in that,” he said.

Still, Fuss thinks investors should be doing their homework now in order to stand at the ready when, for example, inventions come through to address climate change like those that mitigate pollution from car exhaust and airplane travel. Fuss said the potential for a new technological boom to address climate change could be similar to the evolution of steel and plastics in the 1960s, which at the time were viewed as “the industries of the future.”

“The future is vastly different from Union Carbide,” referring to the hundred-year old chemical corporation, which was an early pioneer of the petrochemical industry and is now part of the Dow Chemical Company DOW, +0.88%.

Meanwhile, despite a banner year for returns from corporate bonds, the contrarian money manager has stayed cautious on businesses with highly leveraged balance sheets in part because of their unattractive valuations and the risks around the U.S.-China trade war which has frozen business investment, upended supply chains, and hit manufacturing-dependent regions.

Fuss also sees the recent unionized worker strikes at General Motors GM, +0.83%  as a potential harbinger for trouble at other American automakers which could see their own labor forces organize walkouts in the face of slow wage growth.

“What does that mean? We’re basically sitting out there,” said Fuss, whose fund holds more than a fifth of its portfolio in cash. “I’ve got enough scars and experience to know that when things look like there’s nothing to do, it’s a good time to do your housekeeping.”

On the flip side, the hunt for yield has driven institutional investors, in search of assets that can produce returns in the high single-digits, further into leveraged loans and private debt markets. The International Monetary Fund in their recent financial stability report noted that a growing number of insurance companies and pension funds were trying to source income in increasingly risky and illiquid investments.