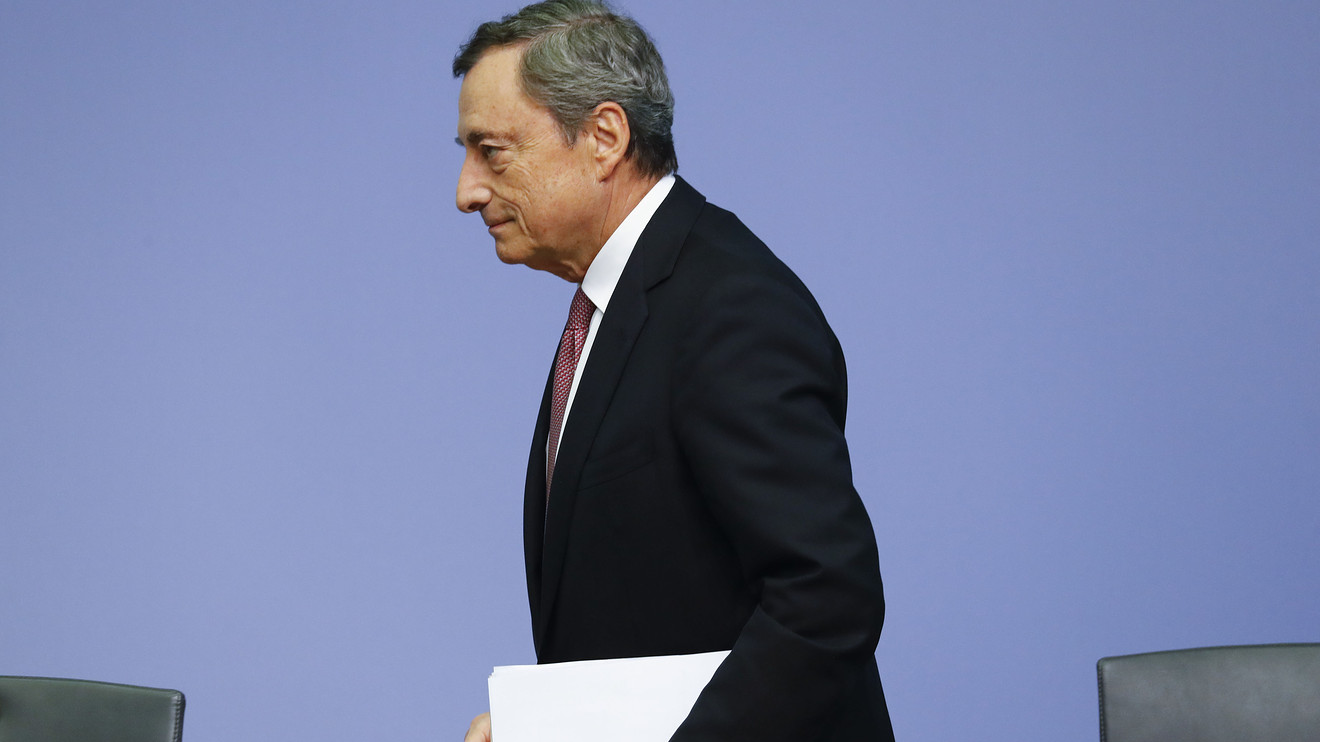 In 2012, Mario Draghi uttered what may be the three most famous words in the history of central banking, pledging the European Central Bank would do “whatever it takes” within its mandate to preserve the euro.

On Thursday, the 72-year-old Italian economist presides over his final policy meeting as he prepares to leave the ECB at the end of this month, completing a non-renewable eight-year term as president. The euro EURUSD, -0.0539% remains intact and Draghi is widely if not universally credited with ensuring its survival, but he also leaves amid controversy and division over the policies he championed and the way he carried them out.

Draghi took the helm of the Frankfurt-based ECB in November 2011 just as the eurozone debt crisis was deepening. In the summer of 2012, with Italian and Spanish government bond yields trading at or near unsustainably high levels, Draghi delivered an unscripted pledge at a London event:

“Within our mandate, the ECB is ready to do whatever it takes to preserve the euro,” he said. “And believe me, it will be enough.”

Draghi then proceeded to lead the ECB in fashioning an emergency bond-buying program that went well beyond anything the central bank had used previously and which could be used in an emergency. The program, known as outright monetary transactions, or OMT, was never used, but its existence, and the work toward fashioning it, served to calm the storm. Yields on the debt of the eurozone’s most vulnerable governments returned to sustainable levels which was just as well given Italy as the eurozone’s third largest economy was too big to bail out.

Moreover, Draghi sent a message about the political will to avert a breakup of the euro. The drama underlined Draghi’s skills as a communicator. He polished a reputation for his ability to jawbone, or verbally guide, financial markets, including the euro exchange rate.

In 2015, Draghi overcame opposition from Germany and its northern European allies to persuade the ECB to implement quantitative easing — the creation of money to buy bonds — in an effort to stimulate the eurozone economy and push stubbornly low inflation back up toward the ECB’s annual target of near but just below 2%. The ECB also pushed its deposit rate into negative territory.

Indeed, Draghi’s “individual confidence and conviction played a key role in extending the ECB’s toolbox, including to QE (quantitative easing), an instrument that had remained largely uncertain in the euro area given the lack of a fiscal counterparty,” said Anatoli Annenkov, economist at Société Générale, in a note.

While Draghi is praised for helping to save the euro, he’s been fiercely criticized for low interest rates and their effect on savers. German tabloid Bild responded to the ECB’s decision last month to push the deposit rate further into negative territory with a photo illustration of a fanged Draghi with the headline: “Count Draghila is sucking our accounts dry.”

Good Morning from Germany, where Draghi’s rate cut & mon bazooka have triggered devastating echo. Even newspapers like ZEIT & SZ, who were prev in favour of #ECB‘s MonPol, criticize Draghi. Tabloid BILD calls him Count Draghila in reference to Count Dracula, who sucks our savings pic.twitter.com/IUEHv3ggk5

Low and even negative yields on government and corporate bonds are also blamed for keeping pressure on Europe’s banking sector.

The ECB is a much more powerful institution than the one Draghi inherited, but there’s a sense that the ECB has largely exhausted its monetary policy toolbox. It’s already taken steps via a tiering system to mitigate the effect of a negative deposit rate on banks. Economists warn of potentially hitting a “reversal rate” where negative rates become a drag on the economy by incentivizing banks to cut lending and households to save more. Draghi’s drive to the September decision also laid open rifts within the Governing Council.

And then there’s exhaustion around Draghi’s own leadership style.

The Wall Street Journal reported at least seven members of the 25-member body, including his closest aide and the heads of the French, German, Dutch and Austrian central banks opposed the plan to restart the ECB’s bond-buying program.

If the ECB is out of ammunition, that might mean that Draghi’s successor, Christine Lagarde, a former French finance minister and former managing director of the International Monetary Fund, will need to use her political skills to persuade Europe’s politicians to use fiscal policy and step up public spending and investment.

Those concerns also illustrate how Draghi’s efforts ground against the euro’s own design flaws as well as broader concerns around the role of central banks in the global economy.

The ECB, like the Federal Reserve and other major global central banks, has been referred to as the “only game in town,” meaning that politicians have been reluctant to pursue expansionary fiscal policies in the wake of the 2008 financial crisis. Instead, the argument goes, they were content to let central bankers take the lead in staving off a deeper crisis while criticizing them for their extraordinary steps.

In the case of the ECB, Draghi and his colleagues stepped into a vacuum. Individual euro members control their own purse strings. There is no eurozone-wide finance ministry.

The broad problem for central banks, wrote economist Michael O’Sullivan in “The Levelling: What’s Next After Globalization,” is that they may have “simply delayed the reckoning of deep-seated economic fault lines, failing to boost economic potential while creating new risks in financial markets and the international economy.

But economist Barry Eichengreen of the University of California, Berkeley, said the resentment stoked by the ECB was “unavoidable”. No to have acted when fiscal policy makers failed to respond would have been “irresponsible.”