Home
Stocks
In One Chart: Think the resurgence of value investing over growth is a fad? Chart suggests stock-market investors may be sorely mistaken
Prev Article Next Article 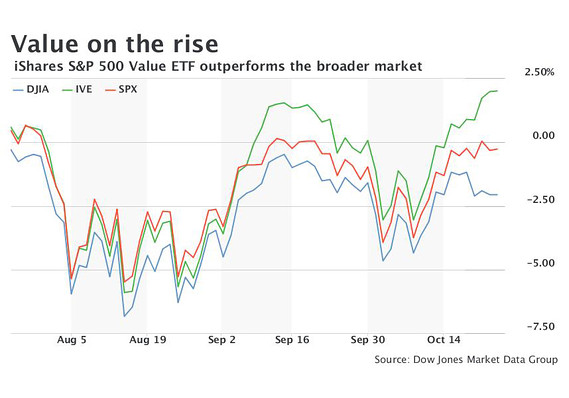 The great rotation into value stocks continues apace, and if investors on Wall Street have been uncertain about its durability, the performance of at least one popular ETF over the past three months may deliver a more lasting impression.

Check out: Opinion: Value investing isn’t back — but economic growth is

The iShares S&P 500 Value ETF IVE, +0.22%  has outpaced the broader market by a sizable margin in recent weeks and as of late Wednesday trade (see attached table and chart) was on track to beat the broader market for the week, month and three-month period, with an outside shot of eclipsing year-to-date gains for its rival iShares Russell 1000 Growth ETF IWF, +0.22% should the trend extend.

In fact, the exchange-traded fund — the most popular ETF product that offers investors a chance to gain exposure to company’s perceived as undervalued by some metric — already has notched an all-time high, as of Wednesday afternoon, while the S&P 500 index SPX, +0.28%, Dow Jones Industrial Average DJIA, +0.17% and Nasdaq Composite Index COMP, +0.19% were still struggling to surpass recent records closing peaks hit in the summer.

So-called value stocks are those which have low valuations based on measures like price-to-earnings or price-to-book value, for example, while growth stocks are those that have exhibited faster-than-average expansion in revenues, cash flows or profits in recent period.

Value has lagged behind growth names since the 2008 financial crisis brought global markets to their knees and has failed to regain its footing since. However, the recent renaissance of value, begun in late August, has some investors believing that value’s return to form may be something more than just a fleeting move.

The rally in value has also come amid a broad advance for bonds, gold and equities, which are all enjoying outsize year-to-date gains, despite that those strategies tending to be inversely correlated, with stock advances usually coinciding with losses for gold.

However, fiscal stimulus and monetary easing being employed by global central bankers, including the Federal Reserve, may be upending conventional strategies because investors are keeping one eye on a market and economic cycle that looks likely to sour in the U.S., and instead buying safe assets, while at the same time seeking richer returns in a world of government debt that offers yields of less than 0%.

Analysts at Goldman Sachs in an Oct. 11 research note make the case that value has made a comeback because its relative discount compared to growth names has made it a compelling investment. “As value stocks have meaningfully underperformed this cycle, the valuation gap between the most expensive and least expensive S&P 500 stocks has opened to the widest level since 2000,” researchers at Goldman including strategist David Kostin wrote.