Bitcoin prices have quietly been in meltdown mode in recent trade and that trend has accelerated amid testimony on Wednesday from Facebook Inc.’s CEO Mark Zuckerberg as he attempts to make a case for digital-currency payment platform Libra.

Zuckerberg is testifying in front of the House Financial Services Committee as a Facebook-backed Libra cryptocurrency venture faces stiff regulatory headwinds inside and outside of the U.S., with lawmakers and market pundits expressing deep concerns that the planned payment system could be employed for illicit activities.

Prices of futures for the No.1 digital asset BTCV19, -8.76%  on Wednesday were down about 9% trading on CME Group and have been down 6.6% so far this week and almost 11% thus far in October, according to FactSet data.

On top of that, the asset is on the verge of trading below its long-term 200-day trend line at $7,438 for the first time since late April (see chart below). Analysts view the 200-day moving average as the line in the sand between bullish and bearish momentum in an asset. 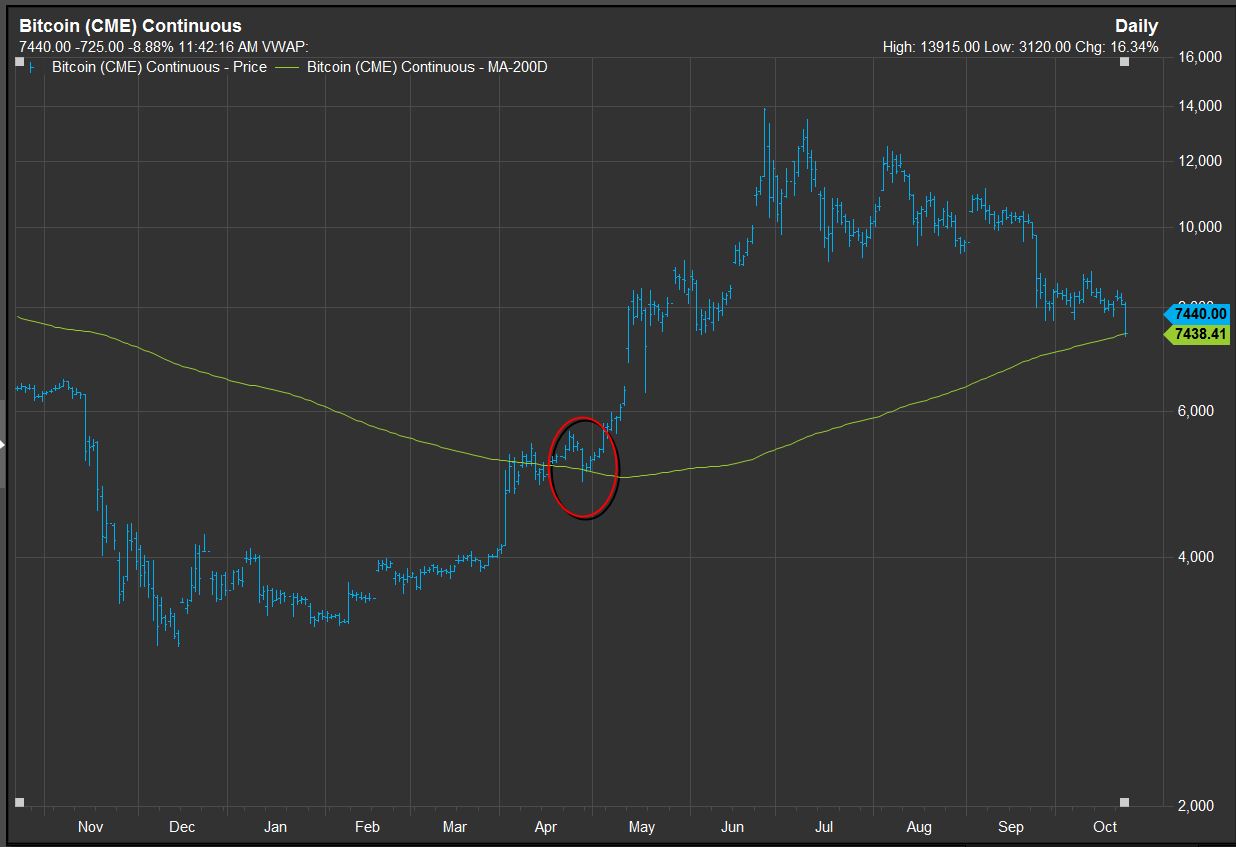 Bitcoin’s 200-day moving average over the past year

Bitcoin’s volatile moves thus far appear to be bearish, based on that measure.

“Libra will be backed mostly by dollars and I believe it will extend America’s financial leadership as well as our democratic values and oversight around the world.”

All that said, reports have suggested that a coalition of companies trying to assemble the global payment Libra were slowly retreating. The Wall Street Journal has reported that payments giants Visa Inc. V, +0.12% Mastercard Inc. MA, -0.24% PayPal Holdings PYPL, -1.15%  and eBay Inc. EBAY, +0.05% were planning to or had already backed out of the Libra consortium.

To be sure, bitcoin’s trading may have little to do with outcomes for Libra directly.

Staunch backers of cryptocurrencies and those who see digital assets as the eventual successor to fiat money, or government-backed currencies like the U.S. dollar DXY, +0.06%, view Libra coin as an impostor.

That is because the digital platform isn’t set up to be, at least initially, a decentralized, permissionless payment network. In other words, Facebook and the consortium members would dictate who can verify transactions, which is viewed as antithesis to the philosophy of hard-line bitcoin advocates, who view the asset as one born out of the financial crisis when central banks were printing money at a furious clip to stem a financial Apocalypse.

“There already is a fast, low-cost, frictionless electronic cash system available to be used for global payments. It is Bitcoin’s original design, now back as Bitcoin SV (BSV), which has the massive scaling plan and technical road map to support a global digital payment system,” wrote Jimmy Nguyen, founding member of Bitcoin Association, a bitcoin merchant advocacy group, referring to versions of bitcoin that are considered more suitable for payments.

“Facebook does not need to build Libra, when it and its partners can simply use BSV to achieve their goals,” he said.

Despite the price volatility for core bitcoin, bullish investors still remain upbeat on the asset, which has gained more than 100% so far in 2019, despite its recent slump.

Some bitcoin backers point to the assets so-called hashrate as a gauge of its expected performance. The hash rate is a measure of a miners’ performance and a higher hash rate increases the chance a computer has of solving the complicated puzzle required to earn cryptocurrency.

“While bitcoin trading volumes might be low, its hashrate has once again reached a new all-time high” writes Mati Greenspan, senior market analyst at broker eToro, in Wednesday research notes.

So-called mining is a key feature of bitcoin and other cryptocurrencies. Digital miners use powerful computers to solve complex problems and are usually rewarded with digital assets. Those miners help serve as the backbone and transaction verifiers of a standard, decentralized, permissionless crypto network.

Weakness for bitcoin also comes as stocks were nursing tepid advances, with the Dow Jones Industrial DJIA, +0.10%   the S&P 500 index SPX, +0.15%   and the Nasdaq Composite Index COMP, +0.15% rising slightly amid a wave of corporate quarterly results this week.