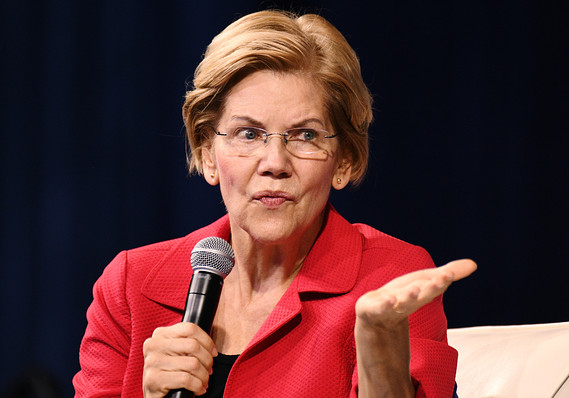 Senator Elizabeth Warren, a Democrat from Massachusetts and 2020 presidential candidate, has been a thorn in the side of the biggest banks

Senator Elizabeth Warren said big banks may see the volatility in U.S. short-term money markets recently as an opportunity to dismantle some of the capital rules put in place in the aftermath of the 2008 financial crisis, and warned the White House not to go along.

“Banks are reporting profits at record levels and it would be painfully ironic if unexplained chaos in a small corner of the banking market became an excuse to further loosen rules that protect the economy,” Warren, a Democrat from Massachusetts and a 2020 presidential candidate, wrote in a letter to Treasury Secretary Steven Mnuchin last Friday.

She told Mnuchin that the Financial Stability Oversight Council should not go along with the effort to ease liquidity requirements on big banks such as the liquidity coverage ratio.

“These rules were designed to ensure that banks have enough cash on hand to meet their obligations in the event of another market crash,” Warren said.

She pressed Mnuchin to report back on what caused the spike in short-term lending rates last month and what the implications mean for the markets.

She cast doubt on the conventional wisdom that the spike was caused by a sudden lack of funds in the market due to quarterly tax payments and Treasury auction settlements.

“These tax payments and settlements were not a surprise and such a cash shortage should have been anticipated well before the rate spike occurred,” Warren said.

Regulators have put in place a nest of capital rules without consulting each other or considering how they all interact, Dimon said in a discussion hosted by the Institute of International Finance.

There could be a larger financial crisis if the liquidity measures are not stream-lined and better thought out, Dimon warned.