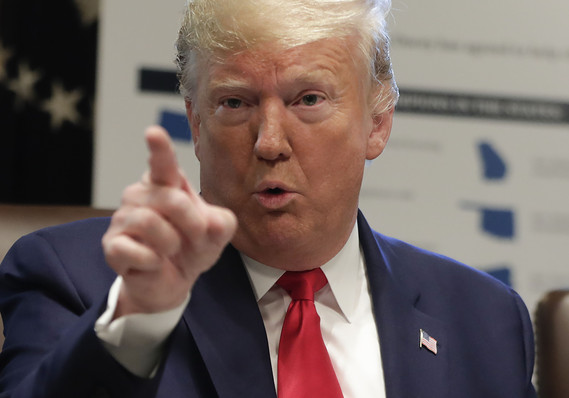 President Donald Trump on Tuesday compared Democrats’ impeachment inquiry to a lynching, a statement that drew quick condemnation from lawmakers on Capitol Hill ahead of a key witness’s testimony.

In an early morning tweet ahead of a deposition from acting U.S. Ambassador to Ukraine William Taylor, Trump said, “All Republicans must remember what they are witnessing here — a lynching. But we will WIN!”

Taylor is scheduled to talk behind closed doors with the intelligence, foreign affairs and oversight committees. In a text message in September, Taylor said it was “crazy” to withhold security aid to Ukraine for help with a political campaign. Democrats describe the holding up of aid to Ukraine to get that nation’s help investigating Trump’s political rivals as a quid pro quo.

“What the hell is wrong with you?” asked Rep. Bobby Rush, an Illinois Democrat who is African-American. “Do you know how many people who look like me have been lynched, since the inception of this country, by people who look like you?” Rush added in a tweet. House Majority Whip James Clyburn of South Carolina, also African-American, told CNN, “that is one word no president ought to apply to himself.”

Conservative commentator Erick Erickson weighed in, saying, “It is not a lynching. Let’s not start dropping words that are important with real historic meaning where we water them down to nothing.” Meanwhile Rep. Jim Jordan of Ohio, the top Republican on the House Oversight Committee, defended Trump by saying the president was “frustrated.”

Sen. Lindsey Graham, generally a close Trump ally, also backed the president’s use of the fraught term, reportedly saying Trump was in fact facing “a lynching in every sense.”

As Democrats investigate, Trump has repeatedly insisted he did nothing wrong when he spoke with Ukraine’s president in July. White House spokesman Hogan Gidley later told reporters, “the president is not comparing what’s happened to him with one of the darkest moments in American history” and said that Trump has used many different words “to describe the way he has been relentlessly attacked.”