Home
Stocks
The Tell: Stock investors can’t ignore politics because it’s ‘the only reason’ a recession is a threat
Prev Article Next Article

If it feels like the stock market and other financial assets are jumping and falling in reaction presidential tweets and news headlines to an unusual degree, it isn’t your imagination, argues one investor.

“Today’s markets are whipsawed by political slings and arrows, often in the form of tweets or breaking news reports. And ‘investors’ increasingly are reacting impulsively to a reality that’s shifting minute-by-minute,” said Brent Schutte, chief investment strategist at Northwestern Mutual Wealth Management Company, in a Monday note. “Put differently, broad swaths of equities can flip from winners to losers in an incredibly short time period — perhaps in the wake of a single tweet.”

‘We believe politics inordinately captures the market’s attention because it’s the only reason that a recession could ensue in the coming months.’

Read: The more Trump tweets, the worse it is for stocks, research finds

Schutte acknowledged that to say that investors don’t like uncertainty is to repeat a cliché. After all, when is life predictable?

But now that social scientists have devised methods to attempt to measure uncertainty, market watchers feel more comfortable quantifying uncertainty — and right now, by one such measure, that uncertainty is running at near historical levels after rising to just below an all-time high in August (see chart below). 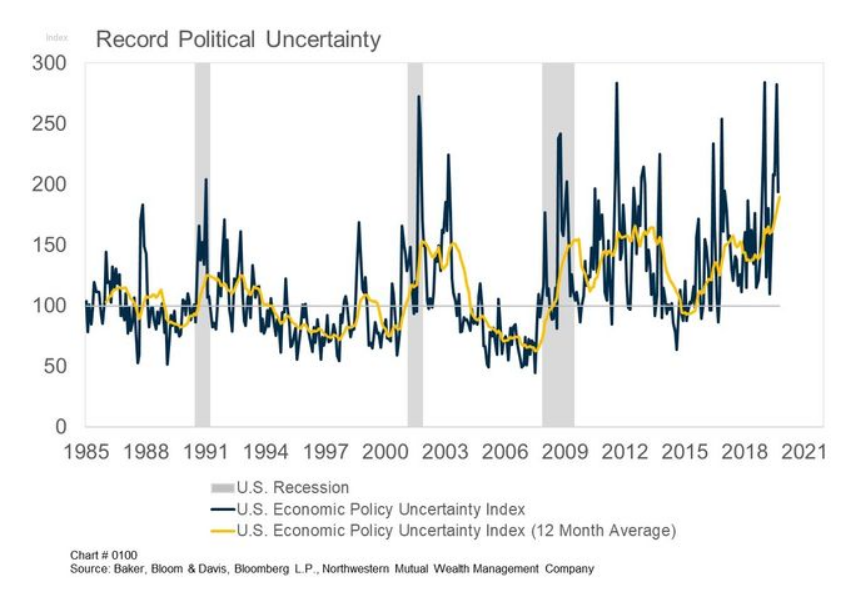 Schutte highlighted the U.S. Economic Policy Uncertainty Index, devised by economists Scott Baker of Northwestern University, Nick Bloom of Stanford University and Steven Davis of the University of Chicago, which draws on search results from 10 large U.S. newspapers, reports by the Congressional Budget Office that compile tax code provisions due to expire over the next 10 years, and the Philadelphia Fed’s survey of professional forecasters.

Need to Know: New S&P 500 highs are riding on blockbuster results from Amazon

The index in August hit its third-highest level of all time, just below the record high set in January. Based on a rolling 12-month average, the past year has seen record uncertainty, Schutte said, with the U.S.-China trade war playing a central role.

The main issue, Schutte wrote, is that rising uncertainty has historically been a “byproduct of recessions.” At the same time, there are few fundamental reasons to expect the U.S. economy to fall into recession, at least based on the traditional economic cycle, he said. After all, Schutte argued, while global and U.S. manufacturing readings are a legitimate source of concern, the larger U.S. service sector remains healthy. Meanwhile, workers are seeing real wage gains, business investment, while slowing, continues to grow and productivity has picked up.

The risk is that those positive developments get drowned out by heightened political uncertainty in the form of Brexit, the U.S.-China trade war and now, impeachment proceedings against President Donald Trump, as well as other issues.

And that may be why political headlines and events are having such an outsize impact right now.

“We believe politics inordinately captures the market’s attention because it’s the only reason that a recession could ensue in the coming months,” Schutte wrote.

Stocks found recent support coming after the U.S. and China agreed to a so-called phase one deal. Schutte suspects that worries about domestic economic weakness may have provided the Trump administration some impetus to strike something of a truce, but noted that a final deal remains far from complete. Meanwhile, trade tensions remain with Europe following the imposition of tariffs on $7.5 billion of tariffs on European products and the possibility of levies on European autos next month.

Schutte, however, sees reasons to expect that uncertainty may have topped out.

The economy, markets and getting re-elected remain the most important things to Trump, he said, and Northwestern’s “base case” holds that if those things are at risk, the administration will cool its trade-war fervor.

“With the election just one year in the offing and economic growth stumbling, perhaps the past quarter marks the peak of trade-war and political uncertainty,” he said.