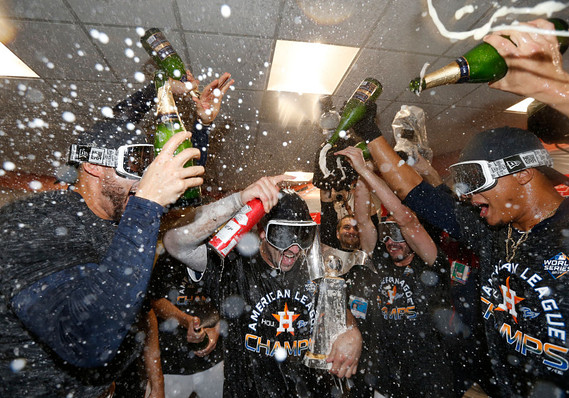 The Fall Classic is finally here and the Houston Astros, fresh off their dramatic victory over the New York Yankees, should be completely focused on what it’ll take to beat the Washington Nationals and their formidable pitching staff.

But because of these five words, there’s a dark cloud hanging over the Juice Box, where the first pitch of the World Series gets tossed Tuesday night:

‘Thank God we got Osuna!’

Why is that such a problem?

According to Sports Illustrated reporter Stephanie Apstein, Taubman’s shouts were directed at three female reporters, including one wearing a purple domestic-violence awareness bracelet. Considering Roberto Osuna had almost lost the game for the Astros, his words made no sense, timing-wise.

But then there’s his checkered past.

Osuna was picked up by the Astros from the Toronto Blue Jays after he was suspended for 75 games for allegedly assaulting the mother of his young child. That allowed the Astros to get one of the best closers in the game on the cheap because many teams weren’t interested in the backlash.

Judging from his outburst, Taubman’s not worried about it.

Amid the uproar his comments caused, the Astros organization released its own version of what happened in the locker room, saying Taubman’s “comments had everything to do with the game situation that just occurred and nothing else.”

That only seemed to make the situation worse. ESPN’s Jeff Passan said that the Astros statement “was stupid. It was insulting. It was demeaning. It also was false, as other reporters who witnessed the incident soon confirmed.”

Here’s one of those reporters backing Apstein’s story:

The Astros called this @stephapstein report misleading. It is not. I was there. Saw it. And I should’ve said something sooner.

Really impressive work by the Astros on creating a bandwagon of Nats fans with one statement, can’t wait to root for DC

From Hinch’s blustering about last week’s sign stealing story, to their insanely tone deaf statement today about a far more serious issue, the Astros seem literally to be co-opting the president’s PR strategy of using anger to cover guilt. Not every team is this arrogant.

I am actually grossed out by this story. Every single female reporter I know has stories of various forms of harassment doing this job. Now the Astros are literally gaslighting a female reporter over something that has been confirmed by multiple witnesses. It’s seriously gross.

The @astros need to stop lying and start apologizing and firing – or the commissioner needs to step on, today – or their own dishonesty and misogyny are going to overshadow their own World Series. #shameful https://t.co/fK95qYeAhU

Of note, Taubman came to the Astros organization in 2013 from accounting firm Ernst & Young, where he worked as a derivative valuation expert.

Related: Women Ernst & Young get schooled on how to act around men