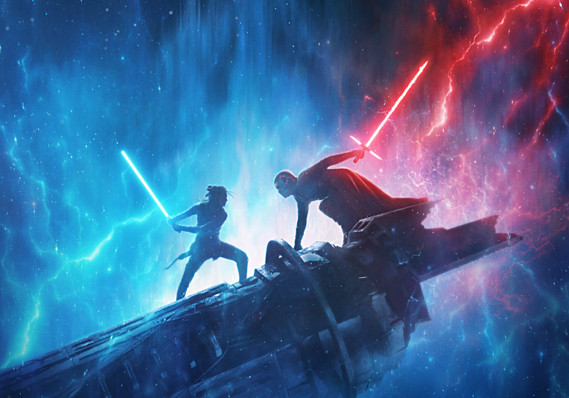 Did you feel a great disturbance in The Force? As if millions of voices suddenly cried out in glee?

That was just the sound of fans getting their first peek at the final trailer for the upcoming movie “Star Wars: The Rise of Skywalker” on Monday night.

The eagerly anticipated trailer made its debut during halftime of ESPN’s “Monday Night Football,” and was likely the most exciting part of the game for all but Patriots fans (New England led the New York Jets, 24-0, at halftime). The first trailer dropped in August.

“The Rise of Skywalker,” directed by JJ Abrams, is the third movie in the latest “Star Wars” installment, and the conclusion of the nine-movie series involving Luke Skywalker and his father.

The film is expected to be another blockbuster hit for LucasFilm and Walt Disney Co. DIS, -0.48%  when it opens in theaters worldwide Dec. 20. The first installment of the current trilogy — 2015’s “Star Wars: The Force Awakens” — grossed $937 million domestically, and its follow-up, 2017’s “Star Wars: The Last Jedi,” grossed $620 million, according to BoxOfficeMojo.

Advance ticket sales also kicked off Monday night, with at least one ticket site reporting sales right out of the gate.

And for the true die-hard fans, AMC Theaters AMC, -1.50%   will hold a 27-plus-hour marathon screening of all nine movies starting Dec. 18.