Home
Stocks
After Hours: ICO offerings way down, but some still using SEC back door to raise funds
Prev Article Next Article

A few brave initial-coin-offering promoters are still using the SEC’s Form D exempt offering process to gain access to accredited investors with no pre-review by the Securities and Exchange Commission, but there’s been a steep drop-off since the SEC started suing, and settling, with some early promoters.

A MarketWatch analysis found 34 new ICO-related fundraisings filed via Form D’s in the six months from April 1 to Sept 30 of this year, after 33 did so in the first three months of 2019.

The stated total for all second- and third-quarter filings was only $1.4 billion, down from the first-quarter 2019 filings that had a total stated value of $1.9 billion.

Form D’s are notices filed by a company for an offering that is exempt from full SEC registration requirements. The key criteria for the Form D exemption is that only “accredited investors,” that is, individuals that have a net worth of over $1 million, or that have consistently made over $200,000 per year in income, or companies that have over $5 million in assets, can invest.

To read: Here’s the blueprint for how ICOs are getting off the ground without SEC vetting

The markedly diminished activity so far in 2019 compares to 2018, when the SEC accepted 287 ICO-related fundraisings with a total stated value of $8.7 billion via Form D’s. 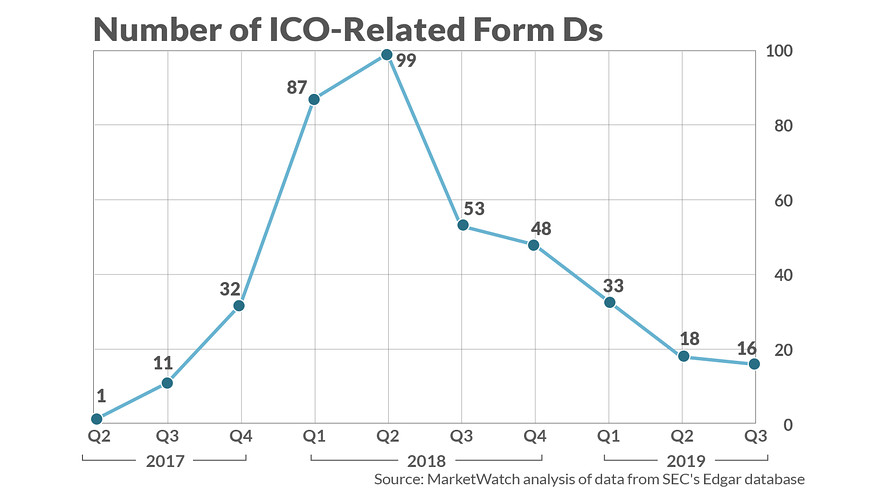 The MarketWatch analysis identified the filings by searching the SEC’s Edgar database for mentions of keywords including “coin,” “ICO,” “token,” “initial coin offering” and “saft” in Form D filings.

The most recent filings are forging ahead despite the SEC’s introduction of significant legal obstacles.

The SEC obtained a temporary restraining order on Oct. 15 against Telegram Group Inc. and its wholly-owned subsidiary TON Issuer Inc., two British Virgin Islands-based entities, alleging it was conducting an unregistered, ongoing digital token offering in the U.S. and overseas that had, so far, raised more than $1.7 billion of investor funds.

Read: Fighting SEC to issue Gram tokens is going to be tough for messaging app Telegram

Media reported that the company told investors it had been in talks with the SEC for the past 18 months regarding its project. MarketWatch reported in February 2018, that Telegram had filed a Form D with the SEC on Feb. 13, 2018, telling the SEC it had already raised $850 million out of a billion-dollar-plus target beginning Jan. 29, 2018.

In early 2018, the SEC issued several subpoenas to crypto-related companies under the guise of information-gathering that would assist the SEC with better understanding the legal and regulatory as well as market dynamics of ICO investments.

Some companies that received those subpoenas settled early. In November 2018, the SEC settled charges against two ICO issuers — CarrierEQ Inc., or Airfox, and Paragon Coin Inc. — for launching unregistered coin offerings. It was the first civil penalty administered solely for violations from an ICO securities offering registration.

The SEC sued Kik Interactive in June 2019 for raising $100 million without registering the offering of securities with the regulator. Kik also used a Form D offering to reach investors initially in late 2017, starting out by raising money from wealthy investors but then targeting a broader base.

Others have reluctantly settled recently. Block.one agreed to pay $24 million after it took advantage of peak ICO hype to sell 900 million tokens in 2017 and 2018, raising billions of dollars.