Home
Stocks
The Margin: Ocasio-Cortez’s future budget shows just how fast $350,000 a year can run out
Prev Article Next Article

MarketWatch recently set off an internet firestorm by suggesting a family of four in San Francisco can have trouble making ends meet, even with that kind of money. Twitter TWTR, +2.46% didn’t hold back:

They’re struggling as I drag them to the guillotine

Understandably, those working two jobs to pay for their home and feed their kids weren’t exactly shedding any tears for the coastal elites who are having trouble paying nosebleed prices for preschool. It’s all about perspective.

The ruckus drew a certain high-profile D.C. figure into the mix:

“Struggling” 🤣 with what? Math? https://t.co/oDMet9QtNE

But the New York congresswoman, a former bartender who has taken up the fight for equality, also has to know that it’s possible to scramble financially even with a generous six-figure income in money-draining cities like D.C. and San Francisco.

The Financial Samurai blog’s Sam Dogen, the man behind the initial breakdown of the $350,000 salary, decided to use Alexandria Ocasio-Cortez as an example of someone who could also encounter those same struggles.

“As an unmarried, 30-year-old woman, what AOC might not realize is that she might very well turn into this family of four one day,” Dogen wrote in a recent blog post. “She should prepare for a financial life in the Washington, D.C., area.”

As a congresswoman making $174,000 a year, her earnings put her in the top 5% of Americans. Yet that money only goes so far when it comes to navigating one of the priciest ZIP Codes in the country, especially is she wants a husband and kids.

Assuming many things, including that AOC marries a man earning a similar income, Dogen came up with this budget: 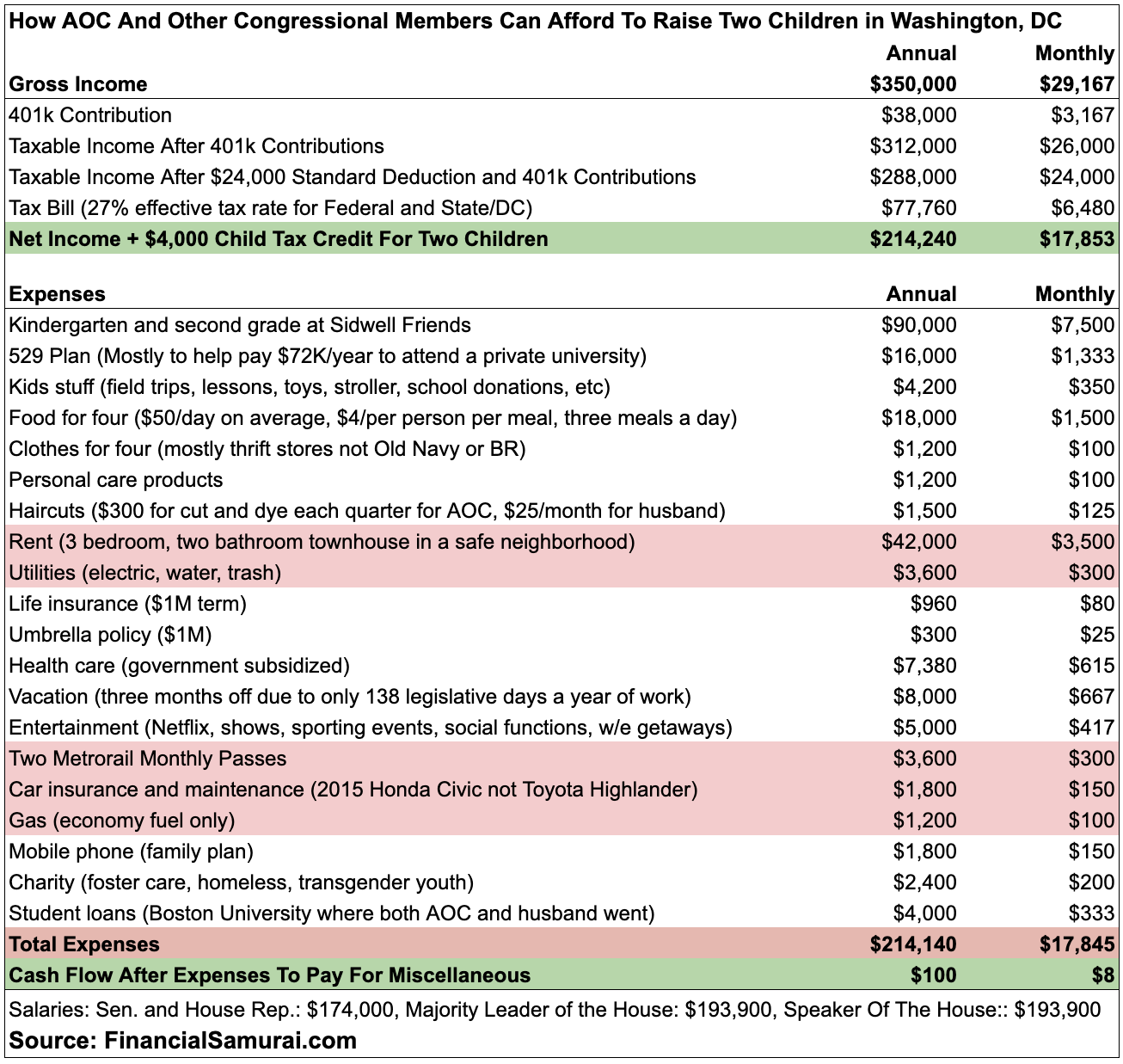 Clearly, education is a killer, especially if Ocasio-Cortez takes the private school route that many of the area elite tend to choose. Add in the savings for Boston University, where she went to school, and the budget is pretty much blown.

There’s simply not all that much fat to trim, but Dogen did offer five routes she could take to tackle these future problems.

1) Be OK with public grade schools and university — This is by far the most obvious way to alleviate financial pressures, though, as Dogen points out, that might be a difficult, and unlikely, choice in her position of power.

2) Do some side hustling — Members of Congress are permitted to earn outside income limited to no more than 15% of the annual rate of basic pay for level II of the Executive Schedule for federal employees, or $28,400.00 a year. That would bring her income up to $202,400, Dogen explained.

3) Lose or quit — AOC can, and probably will, make a lot more money when she’s out of Congress. A book deal alone could be worth millions.

4) Find a wealthier spouse — Dogen points out that she runs in power circles where it wouldn’t be surprising for prospective suitors make millions. “The marriage combination of powerful politician plus wealthy business person is one of the most coveted status combinations in history,” he said.

5) Have fewer children — A big family rarely makes sense from financially, but don’t tell that to a couple trying to build one. “It should be a reasonable ask to not have children before first being able to take care of yourself,” Dogen said. “Our children deserve to be cared for in the best way possible.”

Ocasio-Cortez did not immediately return a request for comment, but don’t be surprised if she chimes in from her Twitter feed.