Beyond Meat Inc. was initiated at sell with a $120 price target at CFRA, with analyst Arun Sundaram saying the plant-based meat company will be overtaken by bigger players entering the space.

“We think larger packaged food companies will end up as the category leaders in the space given their vast global footprint and embedded relationships throughout the supply chain,” Sundaram wrote in a note. “Yet we expect Beyond Meat to be the greatest disrupter in this space since no public packaged food peer comes close to Beyond Meat in terms of research and development spend as a percentage of sales.”

Sundaram notes that “many think Impossible Foods’ Impossible Burger tastes better than the Beyond Burger.”

But Sundaram says Beyond Meat and Impossible Foods are currently leading the charge thanks to partnerships with fast-food players like Burger King, which has the Impossible Whopper, Del Taco Restaurants Inc. TACO, -1.36%   , Dunkin Brands Group Inc. DNKN, -0.60%   , and a host of other chains.

Read: Here’s how Beyond Meat can lose the lead in the plant-based meat category to Tyson

“We think the size of the U.S. alternative meats market could grow to about $100 billion by 2030, driven by the growing awareness of climate change, natural resource constraints and the health risks associated with red meat consumption,” wrote CFRA in a previous note. “For comparison purposes, the U.S. meat market is currently about $270 billion in market size.”

“[A]rguably the number one reason for investors not to buy Beyond Meat shares at this time is the fact that Beyond Meat’s lockup period expires on Oct. 29,” CFRA said. “On this date up to 48 million shares, or about 80% of the shares outstanding, many be eligible to be freely traded in the public market. Given the dramatic appreciation since the IPO, we expect many insiders and private-equity funds to cash out, putting further downward pressure on the stock.”

See: KFC is selling meatless friend chicken — is it actually healthier than the real thing? 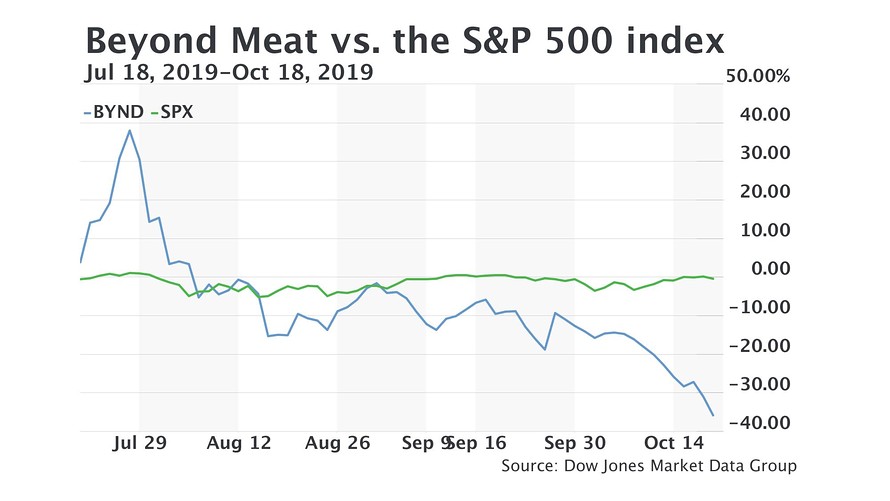 Still, Sundaram expects Beyond Meat revenue to approach $4 billion by 2030, with most of that in the U.S. Beyond Meat is also expected to have about 10% of the market by 2030.

MKM Partners highlight in a recent note that the plant-based meat category is shifting as consumer demand, product pricing, and capacity for producing merchandise still sort themselves out.

“While the growth of the industry is one unknown factor, we are also starting to hear increased chatter around the potential health benefits/questions around the different product assortments, which is worth paying attention to,” MKM wrote.

Analysts note the entrance of another major name as well: McDonald’s Corp. MCD, +0.80%  , on a pilot basis.

And: Beyond Meat’s stock soars after McDonald’s unveils test of company-made P.L.T. burgers

“At this stage, this is bigger news for Beyond Meat than McDonald’s, but demonstrates the willingness of restaurant concepts to add plant-based products and bodes well for longer-term availability,” wrote Cowen analysts in a recent report.

Cowen credits Beyond Meat and Impossible Foods for “reinventing” the veggie burger with their meat-mimicking taste and sustainability messaging. And CFRA notes that these two brands have “revolutionized this category by tailoring products to flexitarians,” those who eat both animal protein and the plant-based alternatives.

But Sundaram also says that these alternatives seem “more like a discretionary item” because of the premium pricing compared with “regular meat.”

“As such we think the alternative meat industry could fact high volatility during an economic slowdown,” he said.

Moreover, when compared with the plant-based milk category, which “could grow to the entire size of the current dairy milk industry” alternative meats will never overtake the size of the animal meat industry “since there are cuts of red meat that may never be substituted with a plant-based option.”