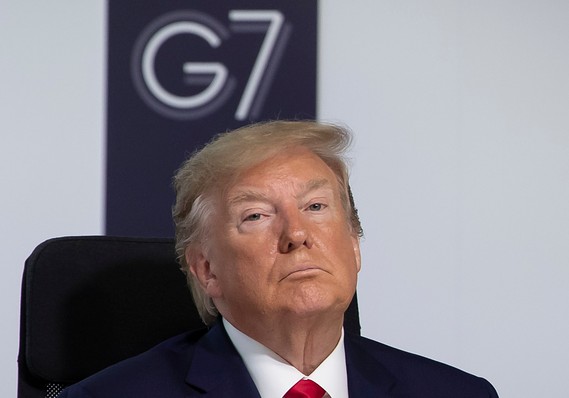 In the early days of the Republic, presidents had to pay out of their own pocket when official guests arrived.

George Washington, John Adams, Thomas Jefferson, James Madison, James Monroe and others left office poorer because of the expenses they incurred as president.

That’s a far cry from today, when guests will actually pay President Donald Trump when they show up at the Group of Seven summit that he’s hosting next year at one of his Florida resorts.

Trump announced Thursday that he would rent out Trump National Doral for the G-7 summit of world leaders, in direct violation of the Constitution, which bans the president from receiving any money (or, in the quaint phrasing of the day, “emoluments”) from foreign governments.

Washington just rolled over in his grave.

Our first president never considered such a move, although he needed the cash. He paid all of his expenses — state dinners, office staff, transportation, medical care and even furnishings — out of his own pocket.

After leaving office in 1797, Washington complained bitterly about the hundreds of guests who showed up at Mount Vernon, expecting to be wined, dined, entertained and housed at his expense.

Somehow, the idea of turning the presidency into a profit center never occurred to him.

From the archives: The Founding Fathers would have impeached Trump in a New York minute

Neither did it occur to Adams, Jefferson or Madison, who all had serious money troubles after they left office in the early 1800s, in part because of the expense of being president. Each of them lost a great part of their fortune in the Revolutionary War, and they lost more while in the presidency. But they kept their sacred honor intact.

According to an article in American Heritage, it wasn’t until the Civil War in the 1860s that the president was relieved of the responsibility of paying the salary of the servants and gardeners at the White House, although they still had to feed them until Harry Truman’s time in office in the late 1940s.

After Congress objected to John Adams spending some funds earmarked for furniture on carriages and horses, no president received funds for transportation around the country until William Howard Taft, who served from 1909 to 1913. Franklin D. Roosevelt, who took office 20 years after Taft’s term ended, flew in his own private plane.

Presidents had free passage in public railroad cars for decades after the Civil War, but the assassination of William McKinley in 1901 led to a requirement that the president had to travel by private rail coach, which he paid for. Calvin Coolidge, in the Roaring ’20s, had the very Trumpian idea of charging newsmen and Secret Service agents for the privilege of riding along.

Although they are considered to be among our most pro-business presidents, in most respects, Coolidge was the opposite of Trump.

He didn’t show off. He never mentioned his opponents by name. He struggled to restore the reputation of the White House after years of corruption. He liked immigrants. He declined to run for re-election. He was frugal not only with his own money but with the people’s.

And he was known as Silent Cal.

Rex Nutting is a MarketWatch columnist.