Oil prices might be acting like a warning light when it comes to the stock market, which is trading near all-time highs despite growing concern over the U.S.-China tariff battle and rising global trade tensions.

“Equity and corporate bonds in the U.S. have so far shrugged off the worrying signs for the global economy coming from lower oil prices. But we suspect that it won’t be long before slower global growth, including in the U.S., takes a toll on both,” said Simona Gambarini, markets economist at Capital Economics, in a Friday note.

Concerns over global economic growth might explain why oil has struggled in the wake of attacks on Saudi Arabian oil-processing facilities last month that temporarily knocked a whopping 5.7 million barrels of day of production offline. While the Saudis are believed to have restored output, that effort was seen depleting the world of much its spare production capacity. That means another disruption anywhere in the world could have a lasting impact on supply. The lack of a more meaningful oil price premium has confounded some market analysts.

Meanwhile, signs of concern about global growth weren’t hard to find. The International Monetary Fund on Oct. 16 updated its economic outlook, cutting its outlook for global economic growth to 3% this year — the slowest pace since dark days of the 2008 financial crisis — as higher tariffs strangle manufacturing activity and international trade.

Investors have paid close attention to the ebb and flow of U.S.-China trade talks and other geopolitical concerns. U.S. stocks even got a temporary, knee-jerk lift on Thursday after U.K. and European Union negotiators announced a tentative agreement on Brexit terms.

“The two dominant geopolitical stories — Brexit and U.S./Chinese trade — are still driving markets. Of the two, the U.S. move away from free trade is by far the more important,” said Kit Juckes, global macro strategist at Société Générale, in an Oct. 16 note.

For now, investors appear tentatively happy with recent signs of progress in U.S.-China talks, including the Trump administration’s touting of a partial agreement with Beijing on Oct. 11. But the fight isn’t yet resolved and the threat of further tariff increases remain. Meanwhile, U.S. tariffs on $7.5 billion of European goods took effect Friday.

And measures of trade-policy uncertainty are running high, with economists at IHS Markit estimating that the resulting anxiety has already lowered U.S. capital spending by $100 billion, or 0.5% of gross domestic product.

Gambarini at Capital Economics sees parallels with 2014-16 (see chart below), when crude prices fell around $80 a barrel due largely to rapid growth in U.S. shale output and the unwillingness of the Organization of the Petroleum Exporting Countries, or OPEC, to cut production. The S&P 500 continued to trend higher over that stretch, while overall credit spreads rose only slightly, despite signs of distress in the energy sector. 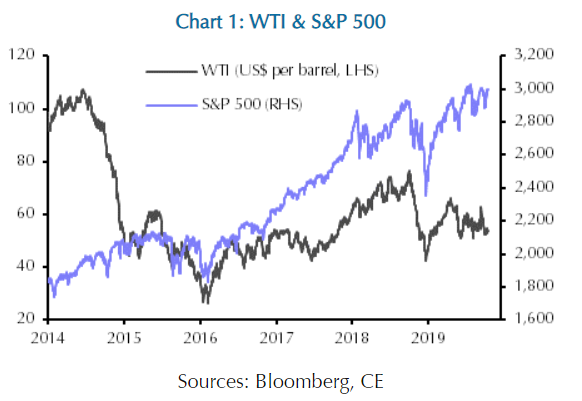 The wider stock market and corporate bonds did come under pressure, however, as worries about grew about demand in the face of a weakening Chinese economy. This time around lower oil prices have only been a drag on stocks and corporate bonds in the energy sector, with investors apparently banking on a swift recovery in the global economy, she said.

Instead, Capital Economics, sees economic growth slowing further in the U.S. and remaining subdued elsewhere over the remainder of 2019, which means “it is only a matter of time before other sectors falter as well,” said Gambarini, who sees the S&P 500 ending 2019 at 2,500, down around 16% from its current level.

Results, of course, typically surprise to the upside after companies steer down expectations. Still, the percentages of companies reporting earnings surprises and revenue surprises are above their respective five-year averages, according So far, the tally finds the S&P 500 is delivering a year-over-year decline in earnings of 4.7%, while revenues have grown 2.6%.

The coming week will see a continued stream of results, including third-quarter earnings on Wednesday from Caterpillar Inc. CAT, -0.25%, which is heavily exposed to China.

On the U.S. economic calendar, September existing home sales data is set for release on Tuesday. Weekly jobless claims, September durable goods orders, the Markit manufacturing and services purchasing managers indexes for October and September new-home sales are all set for Thursday, while an October consumer-sentiment gauge is scheduled for Friday.