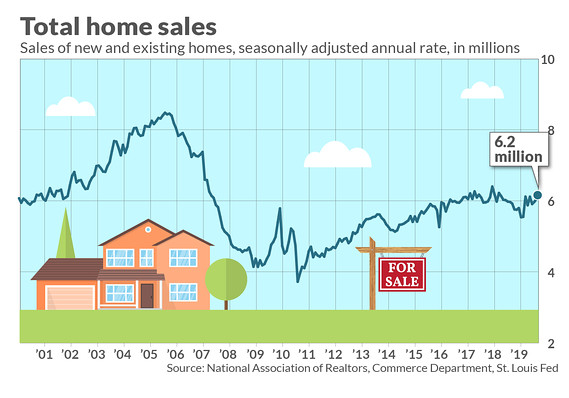 Homebuilders are a buy, according to a chorus of analysts.

That may seem surprising, and even counter-intuitive given slowing U.S. economic growth, but lower mortgage rates, improving affordability, and seasonal trends are all giving homebuilders a boost.

Combined sales of new and previously-owned homes peaked in late 2017 and flat-lined for the following 18 months. New construction wasn’t making much progress, either, as reported by MarketWatch calling the top of the housing cycle in 2018.

It may now be time to revise that earlier thesis, particularly given a strong seasonal pattern in builder stock prices identified by several analysts.

“We see multiple catalysts for order growth and rising demand,” said Wedbush analyst Jay McCanless on Thursday, upgrading his price targets across the universe of builder stocks he covers.

McCanless thinks housing market conditions are improving for builders – itself a surprising notion so late in any economic cycle that’s showing increasing signs of slowing – but he also sees upside to the coming earnings season.

Separately, as MarketWatch reported several days ago, Bespoke Investment Group told clients that “housing market momentum is likely to continue,” based on metrics like mortgage applications.

The supportive conditions McCanless notes include lower mortgage rates, which are helping boost affordability. So is the slowing pace of home price gains and a resilient job market.

So far this year, builders have broken ground on more new single-family houses, which are almost all built for purchase, not rent, as shown in the chart below.

That’s all great for the housing market writ large, but it’s the builder’s business models that make them a buy, rather than other types of housing plays, McCanless said.

Companies like D.R. Horton inc. DHI, +0.90%  have pivoted to more affordable products, something housing market analysts – and customers – have clamored for.

See: Homebuilder stocks are beaten down, but analysts are super-bullish on ‘super-affordable’

We’re about to enter what Fundstrat analyst Thomas J. Lee calls the “Golden” six-month stretch. Since 1999, he wrote, builder stocks have generally hit bottom around the end of October and then risen, on average, 18.3% through the end of April, outpacing the S&P 500 SPX, -0.39%  .

But surely this year is different, with home builders up about 25% in the year to date? “Despite this, we still think this seasonal ‘Golden 6M’ will play out,” Lee wrote. “In 2012, for instance, Homebuilders were already up 35% but during that ‘Golden 6M’ managed to gain another 18%.” Similar dynamics held in 2000 and 2003, he said.

“We are not entirely sure why this strong seasonality exists, but it may have to do with the Spring selling season for housing,” Lee said.

Read: Why buying and selling a house could soon be as simple as trading stocks

Wedbush’s McCanless takes note of the same seasonality in the stocks, and suggests that buying the iShares U.S. Home Construction ETF ITB, +0.71%   in October or November and selling the following April is another way to ride the rising tide.

See: Want to profit from the housing shortage? There’s a new ETF for that.