Home
Stocks
BookWatch: The biggest argument for keeping the Electoral College relies on a myth
Prev Article Next Article

Some critics claim that under direct election of the president, big states would select the president, no matter which candidate those living in the other states preferred. Thus, they argue, the Electoral College protects rural states against the dominance of large states and big cities.

This belief is a myth. In fact, the opposite is more likely — the big states can dominate the Electoral College.

Let’s look at the results of recent elections. They show that big states, or even just big cities, don’t decide presidential elections. It’s true that if 100% of the voters in the big states voted for the same candidate under a system of direct election, they would determine the outcome of the election. There is no chance of this happening, however.

First, big states typically don’t award candidates one-sided victories in the popular vote. No big state has delivered more than 62% of its popular vote to any candidate in any of the five presidential elections in this century, as this table shows. The mean winning percentage in the large states was 55%. 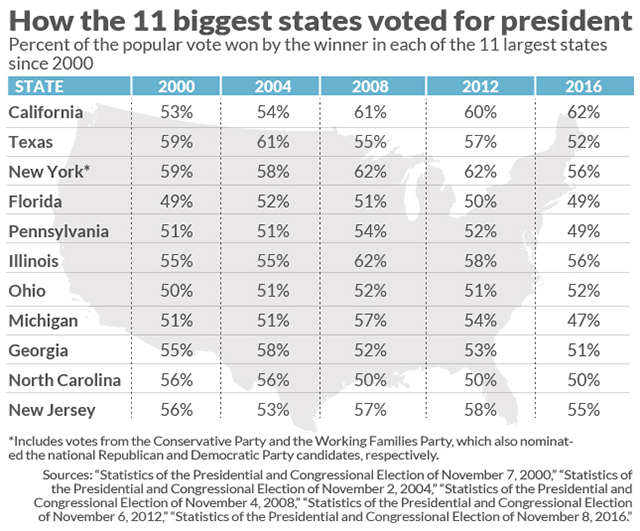 In addition, the total votes for the 11 largest states don’t skew greatly in one direction, as this next table shows. No candidate has won more than 51% of the vote in the largest states in this century. The average difference between the candidates is only 4 percentage points.

In 2004, John Kerry beat George W. Bush in the 11 largest states by 506,874 votes—less than 1% of the votes cast for the two candidates in those states. Bush easily overcame Kerry’s lead in the biggest states to win the popular vote by a margin of more than 3 million votes. 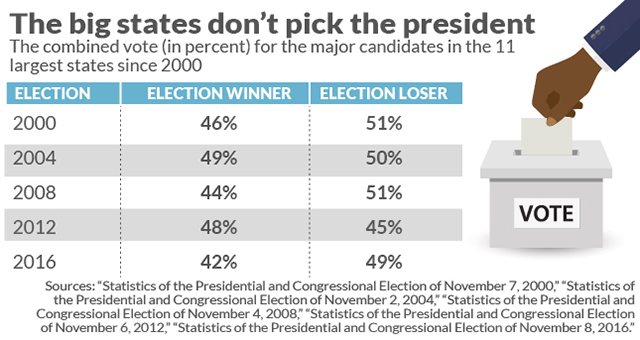 It is also not the case that the big states are Democratic bastions. A majority of the larger states, including Florida, Pennsylvania, Ohio, Michigan, Georgia, and North Carolina, are highly competitive in presidential elections. Of the two largest states, California is Democratic while Texas is Republican. Florida has more voters than New York.

Indeed, it was the electoral votes of the big states that made Donald Trump president, against the wishes of a plurality of the national electorate. Seven of the 11 largest states voted for Trump, awarding him 152 electoral votes versus the 118 electoral votes Hillary Clinton won from the remaining large states.

Thus, there is no danger of large states determining the election outcome by themselves under direct election of the president.

The story is different under the Electoral College, however. In the current system of selecting the president, a candidate could win the presidency by winning only 50% plus 1 vote of the popular vote in the 11 biggest states. That is, under the Electoral College system, about a quarter of the nationwide popular vote (one-half of one-half) could elect the president. Moreover, obtaining 50% plus one vote in 11 states is a far more likely scenario than winning 100% of the vote from these same states.

Actually, the electoral college permits even a smaller percentage of the voters to elect a president. According to calculations made by MIT Professor Alexander S. Belenky using actual voter turnout data, candidates theoretically could have won an Electoral College majority with between 16% and 22% of the national popular vote in the 15 elections between 1948 and 2004.

What about large cities? Does the electoral college protect the country from their domination of presidential elections? No. Big cities cannot even control the states in which they are located, much less the nation.

Los Angeles, San Francisco, San Jose, and Oakland haven’t supported the Republican governors of California (including Ronald Reagan and Arnold Schwarzenegger) in the past two generations. If Los Angeles cannot control statewide elections in its own state, it can hardly control a nationwide election.

Texas has six of the 20 largest cities in the United States. Many of them vote Democratic in a state that at present has no statewide elected Democrats.

The principal reason for cities’ lack of sway is their size. They are simply too small to wield control of politics. The combined population of the 20 largest cities in the U.S. in 2016 was 34.1 million out of a total population of 323.1 million, representing only 11% of the population.

As is typical in defenses of the Electoral College, those claiming that it protects rural voters against the dominance of states and cities with large populations have built their assertions on faulty premises. Big states and cities wouldn’t dominate presidential elections under a system of direct election of the president. Indeed, they are more likely to determine the outcome under the Electoral College—the opposite of its defenders’ arguments. 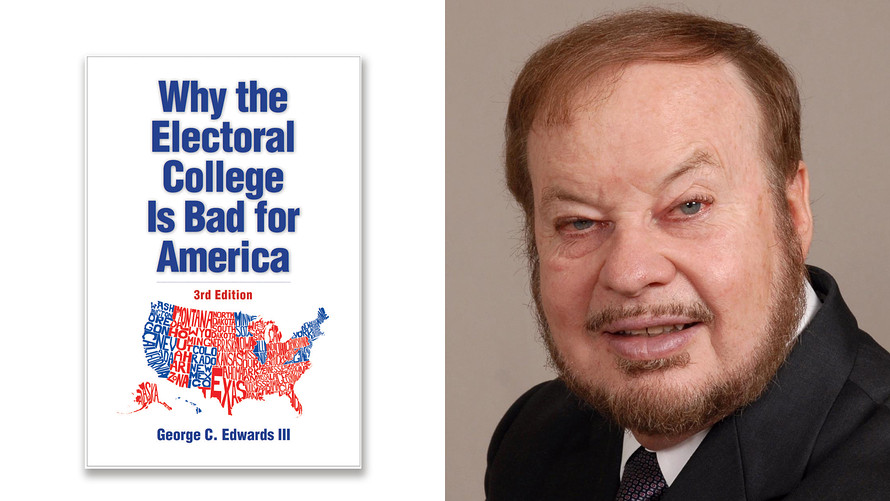 America’s Founders had a wide range of motivations in creating the Electoral College, ranging from fear of democracy and the power of a popularly elected president to concerns about the legislature selecting the executive as in a parliamentary system. Protecting against big-state domination was not one of them, however. Moreover, rural states already have greatly disproportionate power in the Senate, where two senators represent each state regardless of size, and neither need nor receive additional protection from the Electoral College.

In the 21st century, it is appropriate to design a system of presidential selection that reflects the wishes of the American people.

George C. Edwards III is University Distinguished Professor of Political Science and Jordan Chair in Presidential Studies Emeritus at Texas A&M University and a Distinguished Fellow at the University of Oxford. He is the author of “Why the Electoral College Is Bad for America”, now in an updated third edition.