It seems that all investors, from individuals to institutions, have one thing in common: They’ve been getting out of stocks.

Before following the herd, ask yourself: When did the crowd ever correctly foresee a stock market top? There’s a reason for this saying: “No bell rings at the top of the market.”

In fact, the post-2009 bull market has been fueled by hyped-up pessimism. In 2014, when billionaire investors Wilbur Ross and Carl Icahn along with investing icons Marc Faber, Peter Schiff and David Tepper joined the doomsday crowd, I wrote:

“Here’s a message for everyone dying to be the next [Nouriel] Roubini: A watched pot doesn’t boil and a watched bubble doesn’t burst. There will be a correction, but the bull market won’t be over until most bears turn into bulls or the media stops listening to crash prophets.”

As the chart below shows, bears remain bears. 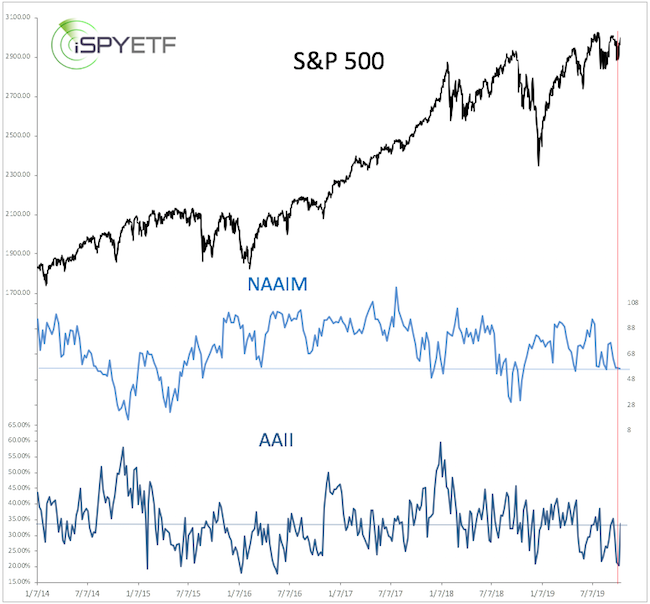 Last week (denoted by the red line) only 20.3% of retail investors polled by the American Association for Individual Investors (AAII) were bullish, the lowest reading since May 2016.

The AAII chart is reminiscent of June 7, 2017, when I published the chart below in this article “There’s still plenty of fuel left to fire up this stock market.” 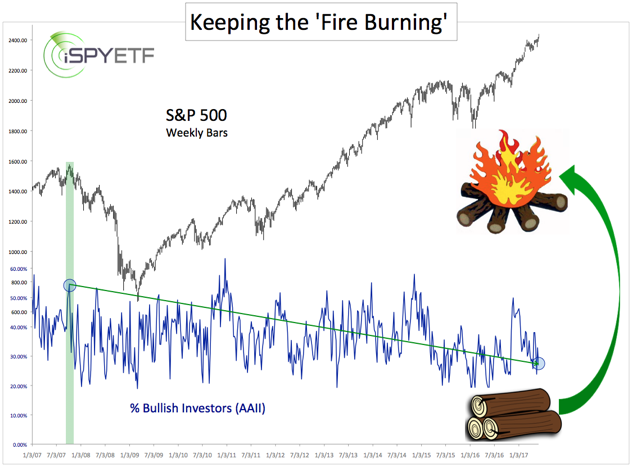 Managers polled by the National Association of Active Investment Managers (NAAIM), essentially institutions, have had an average equity exposure of 57%.

Let’s not forget that this is happening while the S&P 500, Dow Jones Industrial Average DJIA, -0.29%  and Nasdaq COMP, -0.21%  are trading within spitting distance of their all-time highs.

Trade-war tweets, European Union concerns and U.S. recession talk have taken their toll, some claim. But if that’s the case, why are stocks near record highs?

Case in point. I published the chart of online “recession” searches in the Aug. 25 Profit Radar Report and warned that premature bears will likely have to get “burned” before the market turns south.

How to trade sentiment

Here is some short-term help. The S&P 500 seems to be tracing out a triangle (blue lines), which may develop within an even larger triangle (purple line). 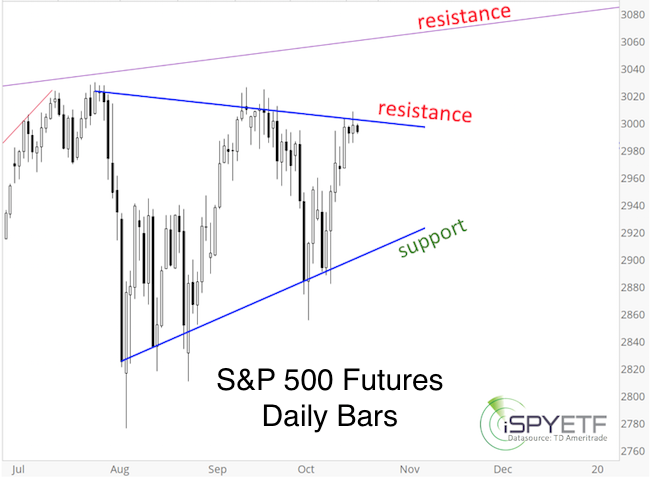 The S&P 500 could pull back while below blue triangle resistance, but a close above resistance (3,002 points) should unlock higher targets (as high as 3,187).

The purple trend line around 3,060 points provides additional resistance. In fact, this trend line is important because it corresponds with similar resistance for the Russell 2000 RUT, -0.22%  and Dow Jones Transportation Average DJT, +0.06%.

A coordinated breakout of all three indexes has had bullish implications over the past decade. More details about the importance of purple trend line resistance is available here.