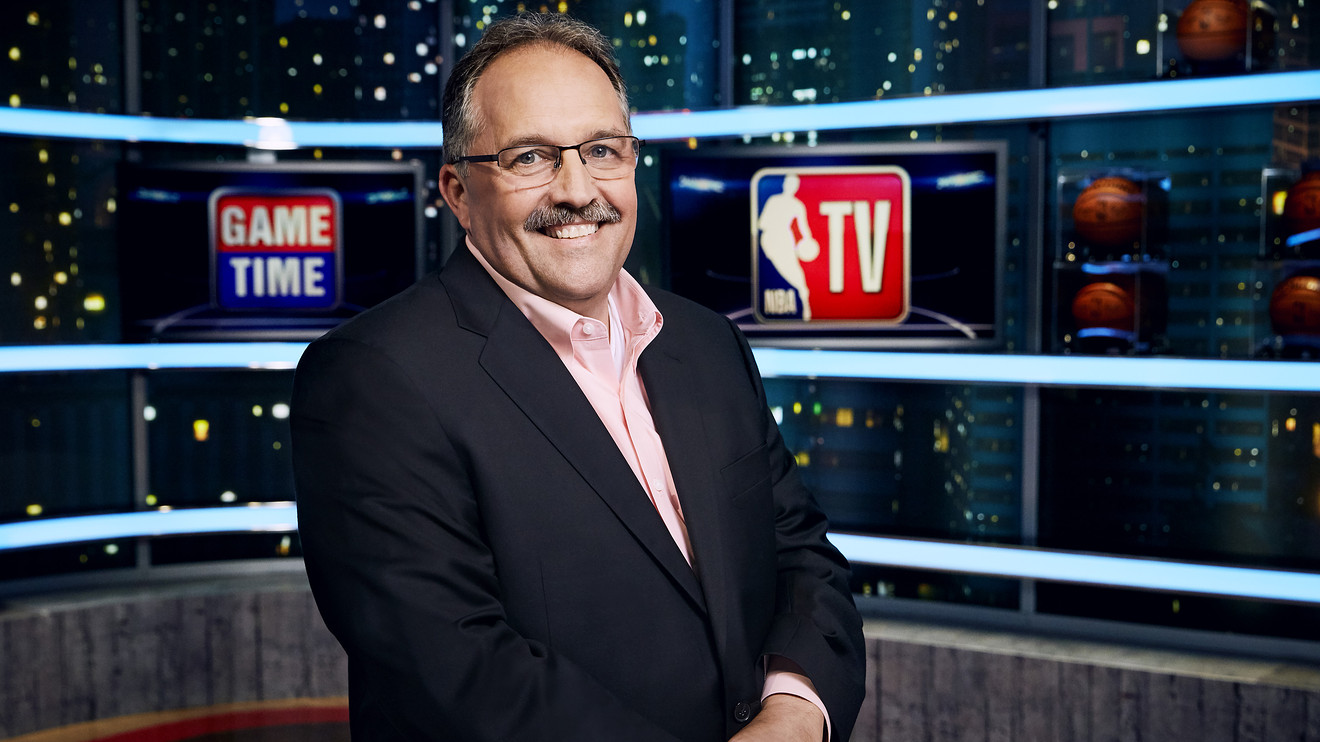 Stan Van Gundy is part of one of the most famous and funny brother duos in basketball. He and his brother Jeff have coached in the NBA and are now commentators known for their straight talk and their sense of humor. With the NBA season starting Oct. 22, we talked with Stan Van Gundy about his new job with Turner Sports and the upcoming season.

Van Gundy started coaching in the NBA in 1995, when he was an assistant coach for the Miami Heat. Most recently he was the coach and president of basketball operations for the Detroit Pistons between 2014 and 2018. Among his career highlights was leading the Orlando Magic to the 2009 NBA Finals.

His contract with the Pistons was for five years and $35 million. Before he parted with the team, he told USA Today, “I’ve been very, very fortunate. I don’t need to work another day in my life. I have all the security I need.”

That’s one way you know he enjoys what he’s doing now: he was hired as an NBA analyst by Turner Sports earlier this month. He will work games for the NBA on TNT on Tuesday nights and also be an analyst in the NBA TV studio.

Van Gundy recently spoke with MarketWatch about how today’s NBA differs from the NBA of the ‘90s, what he doesn’t mind splurging on — and who would win a game of one-on-one between him and his brother Jeff.

MarketWatch: What are you most excited about with your new role with Turner Sports?

Stan Van Gundy: The NBA this year is as wide open as it’s been in years. A lot of teams have a chance to win a championship and make the postseason. And TNT and NBA TV have a great schedule of games. I really like the people that Turner has on staff. Both in front of the camera and the production crews.

“When I came into the league in ‘95 as an assistant coach, I don’t remember people referring to themselves as a brand.”

MarketWatch: How have players changed from when you first started coaching — are they more coachable or less, for example?

Van Gundy: The game has changed more than the players. NBA players are very smart. That’s the most underrated thing about them. They’re hardworking, competitive. The vast majority of them are unselfish. But things around the game have changed. Social media has made everyone a little more sensitive to criticism. The amount of money has changed. At times that makes people focus more on nothing but their individual stake in things. Marketing has changed a great deal. A lot of players are doing more things outside of basketball. When I came into the league in ‘95 as an assistant coach, I don’t remember people referring to themselves as a brand. I’m not saying it’s a negative thing, but it’s the reality. Guys have these opportunities. It used to be just Jordan who was a brand.

MarketWatch: What do you think about how a lot of NBA stars today seem to be able to orchestrate trades and end up on the teams they want?

Van Gundy: Stars today have recognized their power and the leverage they have. The league is just catching up to a lot of other businesses. People generating the revenue having leverage is not a novel concept. It happens in the movie business. We’re in the entertainment sector too. Some people see it negatively, but the NBA is making money off the talents of their best players. Why shouldn’t players have power?

MarketWatch: Do you think players in the NBA have more power than athletes in the other major sports leagues? Is it because they have a strong union?

Van Gundy: The Players Association is part of it. But baseball players also have it. And more players are trying to orchestrate moves in football now with holdouts. Guys in the NFL are starting to take notice and look for ways to leverage their abilities. None of this is great for teams in smaller cities though.

MarketWatch: It seems like a win/win situation today with how both team owners and the players are doing so well financially. What are your thoughts on that?

Van Gundy: We’re getting richer people buying into our league.

MarketWatch: But some franchises have gone up in value from millions to over a billion. Is that from TV deal money?

Van Gundy: That’s part of it, but there are also a lot more billionaires today buying into the league. And the teams aren’t all worth more than a billion, when compared to revenue coming in. My guess is, there’s a huge intangible value, if you look at balance sheets.

MarketWatch: What are the lifestyle changes going from coaching to being an analyst?

Van Gundy: This is a lot less stressful. For starters, I only work a couple of days a week now. I’m still traveling, but not as much. And it’s easier talking about the games than having to try to beat the guy on the other sideline.

“A room without a TV is useless.”

MarketWatch: Which coaches do you think are forward-thinking when it comes to style of play? The way the Warriors seemed to make smaller lineups and spreading the floor popular a few years ago.

Van Gundy: I don’t think in large part that coaches set out to set trends. What coaches do is they take the talent on hand and try to fit the system to the ability of those players and play to their greatest strengths. GMs, as they put teams together, are valuing certain things. Like shifting from big guys to perimeter shooters. It’s borne out of maximizing ability. Today the pace of game is up. What happened was, defenses got so tough, so teams are trying to get out in transition and score that way. With the Warriors’ Steph Curry and Klay Thompson, nobody valued them as highly at draft time as they do now. They also saw the value of Draymond Green, so maybe they were ahead of others with that — seeing that the league was going to positionless basketball. They put it all together. Did a great job. Now people certainly value three-point shooting more. It’s like with the book “Moneyball” — it’s about finding things that lead to winning that not everyone is valuing. Like what the Tampa Bay Rays did this year, making the MLB playoffs with the lowest payroll in the league. The challenge now in the NBA is for teams to get away from thinking they have to build in the image of other teams. Memphis would love to build a team the way the Clippers did — by adding two free agents like Kawhi Leonard and Paul George. But they can’t get those guys.

MarketWatch: Are there teams in the NBA today who you would say are good at Moneyball?

Van Gundy: For a long time San Antonio did it. Indiana has done it. They’ve been relevant for a long time by finding value in players.

MarketWatch: How often do GMs make decisions with their coach’s input?

Van Gundy: They always have some, but how much depends on the specific situation.

MarketWatch: Who are your favorite players to watch?

Van Gundy: There are so many. Steph Curry, and not just his shooting. His ball handling, the energy he brings to the game, how he’s always on the move. JJ Redick. He’s the best-conditioned athlete in the league. He’s smart, tough, and he’s continued to get better. His best season in the league was last year when he was 34. And his second-best was the year before that when he was 33. I love well-rounded big guys. Of course I love Blake Griffin and that’s why I traded for him when I was with the Pistons. He can do so many things. Damian Lillard. He’s a star but also team-oriented; he’s committed to his franchise. Of course Kawhi and LeBron. But when you’re coaching against them, you don’t enjoy any of those guys.

“We’re very good at buying houses at the high end and selling them at the low end.”

MarketWatch: Who would win a game of one-on-one today between you and your brother Jeff?

Van Gundy: No question — now he would. He’s in better shape than I am. When we were younger, he was a better player. In a five-on-five game, he was better. But one-on-one, I won most of the time. I was older.

MarketWatch: I know some teams are hiring sleep and meditation experts. What other trends like that are going on?

Van Gundy: Teams are trying to do everything to get an edge somewhere. To sleep better, be better mentally. I heard this story secondhand, but one team started their first practice this preseason with 20 minutes of breathing exercises.

MarketWatch: Are you a fan of that type of thing?

Van Gundy: I wouldn’t say I’m a fan because you only have so much time in the day. You have to as a team decide what will make the biggest impact. But individually, yes make a lot of these things available to players so they can find things that will help them. If a player thinks it’s helping them and feels better, then they’ll play better.

MarketWatch: What’s the best financial advice you’ve been given?

Van Gundy: From my parents I learned how harmful debt can be. To stay out of it. Especially credit card debt. Instead, save for what you want to buy. And we pass that message on to our kids.

MarketWatch: What do you not mind splurging on?

Van Gundy: Travel. I heard a professor at the University of Miami who studies happiness. He said the happiest people spend money on experiences and not material things. I took that to heart. I also don’t mind spending on our house. It’s where we spend most of our time. I’ve never been one who looks at a house as an investment, but as a place I want to live. We’re very good at buying at the high end and selling at the low end.

Van Gundy: I’m not attached to possessions. The biggest thing in my house is, and my wife might not agree with this, how many TVs are there and where are they gonna be located? Can I get one in every room? A room without a TV is useless.