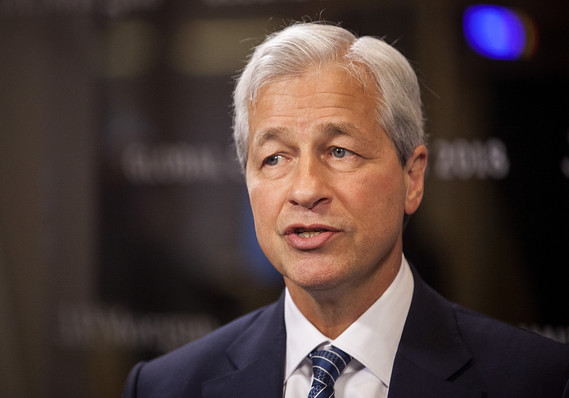 JPMorgan Chase & Co CEO Jamie Dimon said Friday that the turmoil in the plumbing of the financial system last month may be precursor of a bigger crisis if the Federal Reserve doesn’t learn from the experience.

During a moderated discussion at the Institute for International Finance meeting in Washington, Dimon said problems in money markets, a crucial source of funding for Wall Street, was exacerbated due to regulations that currently tie up bank’s extra cash parked at the Fed.

As a result, Dimon said his firm, and other major money-center lenders, couldn’t step in and sop up Treasury debt, in the so-called repo market at a key period. That lack of liquidity in the repo market resulted in short-term rates spiking by at least 10% in September, even though banks like JPMorgan were able and willing to step in to relieve the pressure in the system and lower key lending rates.

JPMorgan JPM, +0.17% has $120 billion parked at the Fed now, Dimon said. The balance regularly goes down to $60 billion, but not much below that level because of regulatory rules.

“We might have made the wrong interpretation [of the rules], it is possible. But I think we all were approximately at the same place on this,” he said.

Dimon says the same issue is lurking in the broader market. He said he thinks the total liquidity in the financial system is $4 trillion, referring to assets that banks hold at the Fed, repo auctions and Treasurys, among other assets. The repo market is the market where investors, including hedge funds and other institutional investors, manage leveraged positions borrow.

‘We’ve spoken to the regulators and I think they’re quite bright and they’ll look at this. And they should do it before the crisis happens—because it will happen.’

On a conference call to discuss its third-quarter results last week, Dimon made similar comments about regulatory restraints, saying that rules in place restricted the behemoth money-center lender from providing short-term funding to the broader market.

“What happened in the repo market is kind of instructive,” he said at Friday’s event. “The same issue will happen eventually in what I call the big liquidity thing, the $4 trillion,” he added.

“If you’re locked up on the ability [to intermediate] because of a multitude of regulations, that might cause more consternation in the market, which you don’t want,” he said.

“Banks hit that limit [in the repo market] and couldn’t deploy liquidity. The same issue will happen eventually in the big liquidity thing – the $4 trillion,” when markets become volatile, he said.

“We’ve spoken to the regulators and I think they’re quite bright and they’ll look at this. And they should do it before the crisis happens—because it will happen,” Dimon said.

In addition to daily liquidity auctions, where the Fed purchases Treasury debt, the central bank recently said it would provide emergency liquidity by buying some $60 billion of Treasury bills a month, expanding its balance sheet.