Credit-rating agencies on Thursday gave investors more reason to worry about why a decade of easy credit to high-risk corporate borrowers could cause a mess in the next downturn.

S&P Global Ratings said its list of “weakest link” companies reached a 10-year high in September of 263, the most since November 2009, during the credit crisis when defaults soared to 10.5% globally for speculative-grade companies.

That doesn’t mean defaults in the roughly $1.2. trillion “junk bond” market are now at crisis levels, but it shows that S&P thinks hundreds of companies could flounder if conditions worsen.

“Credit quality for the average corporate issuer has continued to deteriorate,” said Matt Forester, chief investment officer at BNY Mellon’s Lockwood Advisors, in an interview. “I think good portfolio managers are very much concerned about the leverage and overall quality of corporate financing.”

To qualify for S&P’s “weakest link,” companies must be rated B-minus or lower by the rating firm and be on a negative outlook.

“The default rate of weakest links is nearly eight times greater than that of the broader speculative-grade (rated BB+ or lower) segment, and the weakest link tally may signify higher default rates ahead,” a team of S&P analysts led by Nicole Serino wrote. 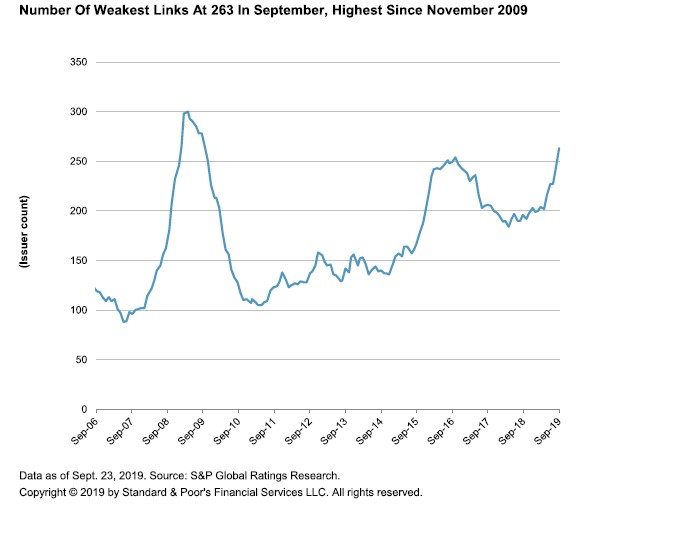 Must be B- rated or lower

Moody’s Investors Service on Thursday said that U.S. corporate defaults were still a low 3.2% in September among speculative-grade companies, but warned that downgrades and defaults could swell when the credit cycle turns.

The credit-rating firm isn’t forecasting that to happen in the next 12 months, but said defaults could “easily exceed the last cycle” peak of 14% if conditions deteriorate, largely due to the record volume of B3-rated debt that risks falling into Caa territory.

Moody’s said that companies typically are downgraded to its Caa-rated category for having an “unsustainable capital structure, limited or no equity, or insufficient liquidity.”

On the economic-data front Thursday, U.S. industrial production fell 0.4% in September, the largest one-month drop since April. The Philadelphia Federal Reserve also said Thursday its gauge of business activity fell to 5.6 in October from 12 in September, but the downbeat data didn’t stop the S&P 500 index SPX, +0.28%  from ending within 1% of its all-time high.

Earlier this month, New York Federal Reserve President John Williams said the “outlook is actually very favorable,” for the U.S. economy, during a talk a the University of California, San Diego.

Still, Forester at Lockwood Advisors said the recent shift out of an inverted yield curve was a worrying sign of a looming recession, even if others disagree.

Check out: The yield curve is no longer inverted. But some still see an impending recession

“In each of the last three cycles, the yield curve was well on the way tightening before we actually entered a recession,” Forester said. “This tends to happen in every cycle — we get a signal and people rationalize and explain why it may not be valid.”