Risks of a U.S. corporate bond selloff often run high into the final months of the year when liquidity can get pinched and credit spreads widen.

But this year could be particularly painful for investors who took up corporate bonds at today’s relatively low spreads, which are the level of compensation a buyer demands over a risk-free benchmark, while shrugging off several potential warning signs in the market.

“We think this fourth-quarter could look at lot more like last year,” said Clayton Triick, a senior portfolio manager at Angel Oak Capital. “The latest ISM manufacturing data came in at its lowest point since June 2009, and that’s one of the primary leading indicators of the economy.”

Triick said recent Federal Reserve intervention into financial markets, via rate cuts, Treasury bill buying and its revival of overnight lending facilities for the first time since the global financial crisis, may be masking signs of weakness in corporate credit.

“We are very biased toward the U.S. consumer and U.S. housing market,” he told MarketWatch. “I don’t think it is necessarily doomsday, but we are definitely putting our chips away from corporate credit.”

Goldman Sachs analysts tracked trading volumes in U.S. corporate bonds for each year since 2016, with a focus on the final three-months, and found a sharp plunge in activity heading into December, but a strong rebound again in January. 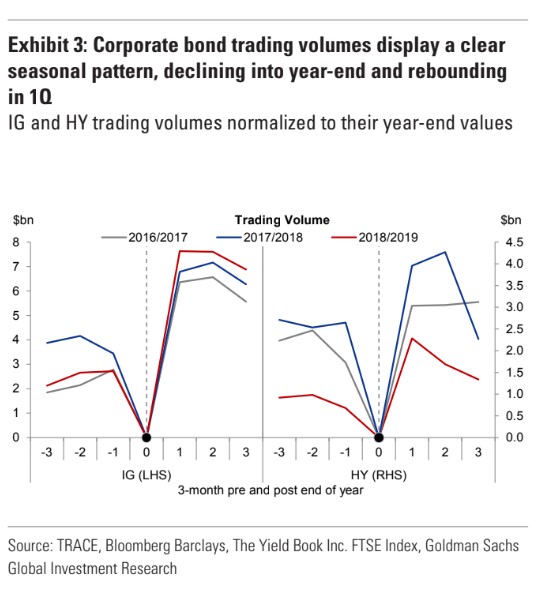 Here’s when liquidity dries up

The Goldman team also found that the “price impact of illiquidity becomes more pronounced toward the end of the year, but then moderates in 1Q.”

“In our view, a similar pattern will likely prevail this year,” the Goldman team wrote in its most recent client note.

The week also saw several additional warnings about corporate leverage, with the International Monetary Fund pointing to a potential $19 trillion corporate debt mess if the next recession is half the magnitude of the 2007-2008 crisis.

This IMF chart shows corporate bond spreads near multiyear lows for U.S. and European investment and speculative-grade rated companies, even as economic growth has slowed. 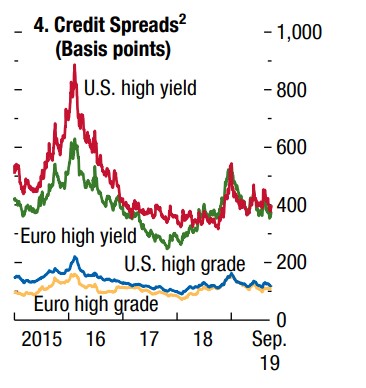 “What we’re finding is that companies have less value in the end, but we’re not getting paid for it in the public bond space, we would’ve expected high-yield spreads to widen,” said Anne Walsh, chief investment officer of fixed-income at Guggenheim Partners, during a speech at the CFA Fixed Income Management Conference in Boston on Thursday.

At the same time, Walsh said credit ratings firms were starting to pick up on the signs of distress, accelerating the number of downgrades.

Bank of America Merrill Lynch analysts estimate the net amount of bonds that have received downgrades versus upgrades stood at $73 billion in the past three months, with $25 billion of that coming from the energy sector.

“And, while economic fundamentals remain broadly supportive of consumer spending, the main pillar to the U.S. and global economy will soften in 2020 as income growth cools. It is thus hard to imagine that the U.S. economy will be growing above potential next year.”