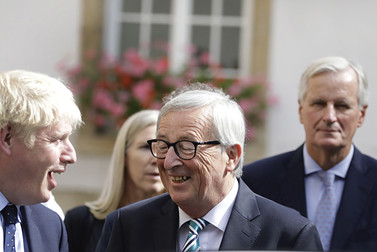 The British pound surged on Thursday while equities registered moderate gains in the wake of an agreed deal between negotiators for Britain to leave the European Union.

Details were still emerging as U.K. Prime Minister Boris Johnson and other European leaders announced the pact. The pound GBPUSD, +0.3118%  rose as high as $1.2987 before retreating to the high $1.28 level.

The pact still needs the approval of the U.K. Parliament, where the DUP still has not agreed to backing the deal. A vote is scheduled for Saturday, Johnson said.